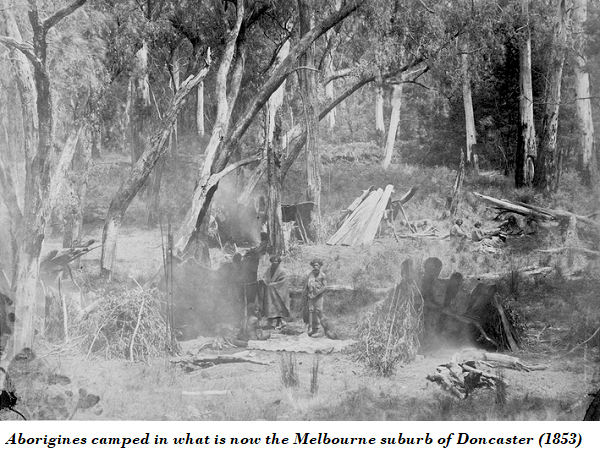 When Europeans first settled in Australia in 1788, they encountered an Aboriginal society of almost incredible barbarism and violence. This was the reality of what they found. The reasons for the violence and barbarism of Aboriginal society derive entirely, or almost entirely, from one factor alone. All of the Aborigines of Australia were hunter-gatherers who had not domesticated livestock nor grown crops for food. As a result, the lives of the hundreds of small tribes that constituted Aboriginal society were engaged in a never-ending struggle to find what food they could from what little existed on this continent. Directly because of this central fact, it was absolutely necessary to keep the size of each tribe small enough for its members to be kept alive by what food and other sustenance they could find. It was therefore absolutely necessary for them to avoid adding any excess mouths to feed to the limited numbers who could be kept alive by the methods of hunter-gatherers in the Dry Continent. They did this by systematically eliminating the excess mouths.

Probably the most important method of eliminating these excess mouths was infanticide, as Ludwik Krzywicki detailed in his 1934 anthropological study Primitive Society and Its Vital Statistics.1 Deliberate infanticide existed throughout Aboriginal society, and it was practised by nearly all of the Aboriginal tribes in Australia. “Horrible tales were told about it. R. Oberlander was shown a woman who had murdered ten children.” Elderly women from the Dieri (Diyari) tribe admitted to South Australian mounted policeman Samuel Gason “of having disposed in this manner of two to four of their offspring: in this way, about 30% of new-born infants perished at the hands of their mothers in the Lake Eyre district”. Among the Narrinyeri (Ngarrindjeri) of the lower Murray district, “more than one half of the children fell victim to this atrocious custom”; the Congregationalist missionary George Taplin “knew several women who had murdered two or three of their new-born children”. Mounted policeman William Henry Willshire:

says of the parts of Central Australia known to him, that at least 60% of the women committed infanticide. He tells of one woman that she had five children, three of whom she murdered immediately after birth, and she explained in her broken English: “me bin keepem one boy and one girl, no good keepem mob, him to[o] much wantem tuckout!” Therefore the women of the bush daily murder their children and do not wish to raise more than two.2

The ostensible reasons for widespread infanticide varied. Victorian government surveyor Philip Chauncy saw a young woman, shortly after her child’s birth, scratch “a hole in the sand behind her hut and having given it a ‘little’ knock on the head, laid it in the hole and kept on crying, the child crying too, till she could bear it no longer, and she went out and gave it another little knock which killed it”. Asked by Chauncy how she could do such a thing, she “replied pointing to the bag on her back that there was room only for one child, and she could not possibly carry another”. When Albert Alexander Le Souef, son of the protector of Aborigines in the Goulburn district, asked a young woman “why she had dashed her infant’s brains out against a tree” she “replied coolly: ‘Oh! too much cry that fellow’”.3

Frail and malformed children were murdered, among other reasons, just because they were frail. A twin was killed (and sometimes both) because the mother could not suckle it … When a mother died while suckling a child, the infant was buried with her, and death often awaited the babe when its father, who as a hunter maintained the family, departed this life.4

Moreover, “sometimes an infant was murdered and cooked for its elder brother or sister to eat, in order to make him or her strong by feeding on the muscle of the baby”. Superstitions regarding twins often resulted in the murder of one or both. There were occasional cases of infants being killed to enable their mothers to suckle orphaned dingo pups instead.5

At base, the reasons for widespread infanticide were the product of the Aborigines’ ubiquitous hunter-gatherer lifestyle. “The natives are generally much attached to their children … and yet there is no doubt that infanticide prevailed to a fearful extent.”6 Krzywicki cites the reasons for this as

connected with the difficulty of bringing up a child in the conditions of native life in Australia, and namely: the long sucking of the child at its mother’s breast, and the necessity of carrying the child on her back for several years during the wanderings inseparable from a roving way of life.7

As Chauncy found, Aboriginal women “justifying themselves before the white men for the murders they had committed, pointed to the bag in which they carry their infants and said there was only room for one child in it”.8 In Central Australia a new-born infant was killed if its predecessor was eighteen months or less; in other places, the new infant was killed if the previously born child was unable to walk; in other places, if the elder child was not yet aged three or four.9

[If] we assume that [an Aboriginal] woman gave birth on an average to five children, then about 20% of the total number of children in these tribes would perish [through infanticide] immediately after birth … In other tribes … it was the custom to murder every child born over and above the three living ones. Here infanticide would dispose of about 40% of the new-born infants … But our percentages are even so very modest ones as compared with those of some observers. Some authorities even assert that 50% of the new-born children died a violent death immediately after birth.10

Some mortality figures may be inferred from these realities. If the Aboriginal population of Australia was 300,000 in 1788—some demographers, rightly or wrongly, put the figure far higher—and if the Aboriginal birth rate was about 4 per cent per annum, and if only 20 per cent of all new-born infants were killed, then this suggests that about 2500 infants were killed every year prior to European settlement, or 250,000 per century. In the estimated 40,000 years of Aboriginal habitation of Australia prior to 1788, it therefore follows that 100 million  Aboriginal infants were deliberately murdered.

But the reality gets even worse. It seems certainly to be the case that many Aboriginal children were deliberately killed to be eaten. The existence of this eating of children is testified by all too numerous facts. A swagman, Phil Moubray, relates that he found in the basin of the River Mitchell the Aborigines roasting and eating their own children:

When a child looks well, is “well-fed,” or “fat,” it may happen that one of the men, or even the whole community, murders it for cannibalistic purposes in the absence of its mother … We do not think that such cannibalism was common, though there are many references to it … It was only in periods of drought and famine that child-eating assumed large proportions … In hard summers the new-born children seem to be all eaten in the Kaura tribe. [Explorer Alfred William] Howitt inferred this from the remarkable gaps that appeared in the ages of the children … [I]n the Birria tribe during the years 1876-77, in the drought, not only were all the infants devoured, but even the younger grown children. However, in some tribes this practice appeared, even in a normal period, not to be so very rare. At least, if the gossip that circulated among the tribes were to be believed, cannibalism was even more extensive than we suppose. For instance, one tribe relates of another that it marks at birth those infants which are to be eaten later on; again the children of some women were always killed and eaten as soon as they got fat enough. According to [doctor and squatter Richard] Machattie, a tribe numbering 250 when the Europeans came, during the next six years ate seven children, i.e., about 3% of the whole population.11

ANOTHER apparently ubiquitous feature of Aboriginal society was the striking majority of adult men compared with adult women:

According to [squatter Edward Micklethwaite] Curr, there was in every tribe when it first came into contact with the Whites “a permanent excess” of men over women, amounting to as much as two to one … [Squatter Peter] Beveridge, noting the preponderance of men over women, declares that this exists not because more boys were born than girls—the sexes equal each other at birth—but because the mortality among the women after the age of puberty is attained is far greater than among men: this is caused by many factors, the most important of which is early marriage (at eleven or twelve years of age) and the treatment of the wives by the men as if they were no more than cattle.12

Apart from infanticide and other factors occasioned by the hunter-gatherer lifestyle, another apparently important cause of death was tribal warfare. “Every tribe dreads a night attack from another tribe”.13

Amongst the whole of the tribes of Australia the cause not of fights, but of bloodshed, was, nine times out of ten, the belief that the deaths of persons, no matter from what apparent cause other than old age, was attributable to the spells and incantations of some of their enemies, their enemies including all Blacks not their intimate friends and neighbours … With the death of women and young children the Blacks generally did not concern themselves, but for every adult man who died from any cause save old age, a corresponding victim was anxiously desired … [This] systematized murder throughout the continent rendered the friendship of the tribes at large impossible, and was the great factor of savagery and degradation.14

That pre-literate societies were not the peaceful, idyllic Edens widely imagined today and depicted in the contemporary media, has been shown in many recent works by franker and more truthful anthropologists, such as Lawrence H. Keeley in his War Before Civilization: The Myth of the Peaceful Savage (1996). But “The Myth of the Noble Savage” is a powerful and persistent one, and the present tendency to whitewash and obfuscate the barbaric aspects of Aboriginal society—while depicting European settlement in Australia as genocidal—has only strengthened the force of this image.

A number of conclusions may be drawn from the facts presented here. First, pre-contact Aboriginal life resembled more closely than anything else Thomas Hobbes’s famous description of “life in the state of nature”: “brutal, nasty, and short”. No one in their senses would voluntarily choose to live in the lifestyle of pre-contact Aborigines. Any of our radicals who argues for its merits should be compelled to live in their manner: typically stark naked, with no buildings or more than primitive shelter, permanently foraging for whatever food could be found, illiterate, and, if ill, treated by a tribal witch doctor. Second, it is apparent that the Aborigines had no concept of human rights of any kind, only collective tribal survival, and no notion of any of the aspects of justice which we take for granted, from the presumption of innocence to the sanctity of human life, especially of children and other innocents. Finally, these concepts were brought to Australia, however imperfectly, by Europeans in 1788, but today our radicals are doing their best wholly to reverse the historical facts, branding the Aborigines as innocents and the Europeans as genocidal monsters. As always, it is up to the historian to, as von Ranke famously put it, set out “what actually happened”.

William D. Rubinstein taught at Deakin University and at the University of Wales, and now lives in Melbourne. He has often written for Quadrant.

11 thoughts on “Life and Death in Pre-Contact Aboriginal Australia”

The Biases of Genocide Studies