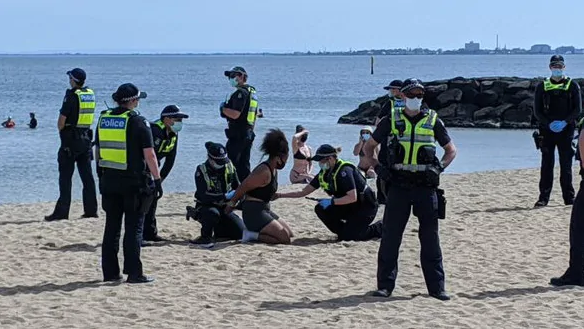 In early September alarming events have taken place in Victoria that have captured international attention. In Ballarat, a large rural city famed as the site of the historic Eureka Rebellion, three police officers went to the home of a modest working-class family and arrested Zoe Lee Buhler, a visibly pregnant young woman. They charged her with sedition. The whole matter was quite distressing and confusing for her, because Zoe Buhler, who evidently is not highly educated, didn’t seem even to know what sedition is. Neither did her agitated and uncomprehending husband, who live-streamed the arrest as it occurred in the family’s kitchen.

This column appears in October’s Quadrant.
Click here to become a subscriber

Zoe Buhler’s supposed crime was posting on social media her support for an upcoming protest rally critical of the state government’s heavy lockdown regulations. That was all. She didn’t even attend. But the police were charging her with sedition, a crime one step short of treason, and thereby treating her as a political dissident intent on destabilising our system of government. This is ridiculous. It beggars belief.

These police were carrying out orders issued not by the state’s Attorney-General, but by admin­istrators in the Health Department. Due to the unprecedented powers granted them under Victoria’s “State of Emergency”, health bureaucrats now carry serious weight—and don’t we know it, as the police follow their bidding during the COVID-19 crisis. Lacking all sense of proportion, health managers treat members of the public who are being cheeky nuisances, like Zoe Buhler, as dangerous threats to homeland security. So instead of giving her a polite yet firm warning, the administrators utilise laws intended for the likes of a Julian Assange.

Dare one add that the state’s Health Minister, Jenny Mikakos, has a law degree from Melbourne University and was herself formerly a solicitor in private practice, so she ought to know better. But she has escaped all criticism of her underlings’ cavalier excesses. (online editor’s note, Oct. 5: Ms Mikakos was soon after abandoned by her Premier and has resigned both her portfolio and her upper house seat.)

Many have noted something distinctly Orwellian in the way things now run across Victoria, and not just how the state’s Chief Health Officer has great power with next to no transparency, accountability or oversight. (A frustrated Scott Morrison told the media on September 7 that the Victorian government regards its modelling for the lockdown of the state as too secret even to reveal to the Prime Minister’s Department.)

Much as Orwell envisaged a Ministry of Peace responsible for waging war, and a Ministry of Truth which spread lies, in present-day Victoria our Department of Health uses police to harass a pregnant woman with little concern for her physical health and mental well-being, even preventing this expectant mum from getting to a medical appointment to check on her unborn baby. Department of Health? Health Minister? Chief Health Officer? Worse still, instructions were given for police to seize both Zoe Buhler’s and her husband’s mobile phones. Common sense stresses you don’t take away a pregnant woman’s phone, as it has those contact numbers she needs in the event of an obstetric emergency. Not in Victoria anymore.

What fascinates me is the subsequent uproar. If ever we needed evidence that younger generations are ignorant of history, and how it urgently needs to be studied not only in universities but in secondary and primary schools, the evidence is in the shallow tone of what has been said about the arrest of Zoe Buhler. The vast majority of people have been appalled at this disgraceful act by the Victorian government, and by other excesses occurring under a seemingly unending, and undemocratic, “State of Emergency”. For them it clarifies how wrong things are. But there is little depth, and no historical awareness, to the collective outcry. People lack moral co-ordinates to use in argument, while some Victorians have defended those country cops, insisting they were just obeying orders.

This is the famed “Nuremberg Defence” used by Nazi war criminals when put on trial. They claimed they bore no personal responsibility for the bad things they did. They were just carrying out orders, the defence line went, and so were morally obliged to follow instructions through. Obedience was a duty. The entire Nuremberg episode brought an end to that style of legal defence, and never again would the justice system in democratic countries accept that members of the police or military are innocent if they do bad things on orders from above.

Clearly, the people of Victoria have forgotten that golden principle. Unacquainted with how the Nuremberg Defence was so discredited, it therefore seems on the way back. Accused Nazi war criminals might well have a fighting chance if sent to trial in Victoria today.

It doesn’t stop there. Another opinion about the Ballarat incident went into instant circulation; this was most clearly expressed by a letter published in the Weekend Australian of September 5-6, titled “Pendulum Swings Too Far”. The correspondent made the point that irrespective of whether police officers were in the wrong or the right, the reason people were fussing was only because a pregnant woman had been arrested.

But that is the point. It is a moral norm in our society to show special consideration for pregnant women, yet Zoe Buhler was treated unsympathetically by the police, as is evident from the video record. Again we must invoke Nuremberg, because a hallmark for immoral behaviour by authority is how it targets the vulnerable and weak. That came out time and again in those Nazi war trials and firmly established a moral code for what is acceptable. To argue or even think it is okay for police officers to follow questionable orders to harass a pregnant woman is to take a step towards an Adolf Eichmann.

It is from this prominent Nazi that we get another key term, “Little Eichmanns”. These are seemingly harmless ordinary people, officials who willingly do unethical things in their community, and whose actions collectively therefore make immoral systems possible. As was stressed at Eichmann’s 1961 trial in Jerusalem, if you get enough of these people going along with bad orders you’re on the path to a holocaust. History has repeatedly shown this. Eichmann himself insisted until the very end that he was just following orders, although what his trial made abundantly clear is the “banality of evil”—how evil is largely conducted by normal-seeming officials on an immediate very small scale: they try to pass off their personal actions as inconsequential against the grander scheme of things, but those actions set and affirm the moral tone.

Much as the Nuremberg excuse has surfaced again, no one has pointed out how the police at Ballarat were Little Eichmanns. They didn’t shout, they didn’t threaten, they just unemotionally processed a very pregnant, upset and bewildered woman, showing neither hostility nor empathy towards her throughout.

Witnesses at the Eichmann trial described his behaviour during the war, and how it took this same pattern; the official dispassionately got on with his daily work as if there were nothing ethically questionable about what he was doing. Eichmann treated people as livestock and calmly proceeded with his job, which is just how we see those Ballarat cops behaving in the video. Zoe Buhler explains to them repeatedly that she is about to go to a medical appointment to check on her unborn baby, and offers to take down her social media post. The three cops could have allowed this, given her a verbal warning and left it at that. They are empowered to do so in such circumstances. But instead of showing human decency, they dispassionately continued with the needless arrest of this agitated expectant mother, handcuffing her and hauling her off to the police station when she should have been getting an ultrasound.

For people of my generation this is all crystal clear. A proper sense of morality tells you to avoid following immoral orders; and you protect the vulnerable, not pounce on them as easy victims. These were principles for our lives, what formative figures like Gandhi, Bertrand Russell and Martin Luther King preached when I was young. But that’s history, a discipline nowadays ridiculed as irrelevant to how we conduct our lives.

At the time of writing Dr Christopher Heathcote has spent 178 days in virtual solitary confinement under Victoria’s State of Emergency. As a single person, he is forbidden by the emergency laws to meet with any other individual.

UPDATE: Victoria Police take another pregnant woman into custody, this one for being apprehended more than 5km from her home. Those who prefer to avoid foul language might wish to kill the sound.

18 thoughts on “Eichmann in Ballarat”