The Poetry of Adam Lindsay Gordon 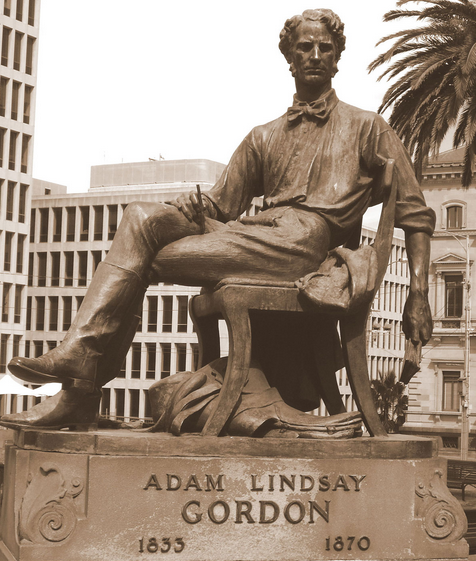 In the 150 years since Adam Lindsay Gordon’s death in 1870 his reputation as a poet rose to great heights, celebrated as the “National Poet of Australia” with his bust in Westminster Abbey in 1934, only to decline to neglect and comparative obscurity. His first published book, The Feud (1864), was a poem in the manner of the Scots border ballads. Popularised in the nineteenth century by Sir Walter Scott, the ballads were a major inspiration to Gordon. His verse continued to appear anonymously and pseudonymously for the next five years when, as Marcus Clarke recalled in his preface (1876) to the reissue of Gordon’s Sea Spray and Smoke Drift (1867), “he discovered one morning that everybody knew a couplet or two of ‘How We Beat the Favourite’”. Although set in England, its account of a contemporary steeplechase proved immediately popular in Australia. “Within a few days every sporting man in Melbourne knew it by heart,” Sir Frank Madden confirmed in Edith Humphris and Douglas Sladen’s Adam Lindsay Gordon and his Friends in England and Australia (1912): “We were all horsemen then, and looked upon steeplechasing as the acme of the sport.”

This essay appeared in a Recent Quadrant.
Subscribers had no need to wait for the paywall to come down

Bye the bye did you like those verses of mine, “The Stockrider”? It was written at Yallum [Riddoch’s station near Penola] where I think you saw the manuscript, in fact, I think it was there. Now I remember this because they made quite a stir here & were copied into The Australasian & spoken of with praise—I don’t think much of them myself.

The Australian setting, the poignant theme and the note of authenticity gave the poem immense appeal. “This is genuine … The writer has ridden his ride as well as written it,” Marcus Clarke wrote in his preface.

Later commentators have agreed. Douglas Stewart and Nancy Keesing wrote in the introduction to The Pacific Book of Bush Ballads (1967):

Gordon, particularly with “The Sick Stockrider”, did undoubtedly give the greatest single impetus to the ballads of the Nineties; and probably … he established the style of the pounding rhythm and the long line which is generally characteristic of the ballads after him.

He was the first of Australia’s literary balladists—“The Sick Stockrider” was clearly the one poem from which the ensuing hosts of bush ballads derived. His poem contained in it the beginning of the story of Australian bush life. The balladists who came after him, crowding the Literary Pages of the 1880s and 1890s, took up and amplified the story … The lament of the dying stockman, however, will always mark the moment when the literature of this country began to move in a new and more characteristically Australian direction.

On February 19, 1870, the Australasian published Gordon’s “From the Wreck”, a vigorous horse-riding narrative. Henry Kendall remarked on its “instantly recalling Browning’s vivid ‘How They Brought the Good News to Ghent’ [sic] but rendered by reason of its local colouring independent of the latter”. This was followed on May 7 by “Wolf and Hound. Our Sergeant’s Yarn” dealing with the hunting down of a bushranger. The Australian bush ballad was firmly established. Kendall remarked in “Men of Letters in New South Wales and Victoria”, Freeman’s Journal, March 2, 1872:

they seem to have been suggested by the robust, sporting lyrics of Whyte-Melville, Lawrence, and Kingsley. Still we are bound to say we believe that, in naked strength, in dash, and in all the requisites that go towards making a perfect song of the sort, Gordon’s productions are far and away beyond his models.

Gordon wrote in the dominant nineteenth-century tradition with its themes from the Classics (“Podas Okus”, “Pastor Cum”), the Bible (“Delilah”) and medievalism (“The Romance of Britomarte”, “The Rhyme of the Joyous Garde”). The archaisms and poeticisms were all part of contemporary poetic practice. Tennyson was a significant contemporary influence. Clarke cites others: “The classic student will find much to repay him in the many Browning–Landor poems which bear the poet’s name,” he wrote in his “Country Leisure” piece in the Brisbane Courier,  September 4, 1875, and in the preface; “The influence of Browning and of Swinburne upon the writer’s taste is plain.”

But at the same time Gordon had been providing rhyming racing tips for Bell’s Sporting Life in Australia. The emphasis here is on the immediate—on contemporary, colloquial idiom, and on a fluent, informal manner, capturing the conversational and spontaneous. He writes in “Hippodramia”:

DEAR BELL, – I enclose what you ask in a letter
A short rhyme at random, no more and no less,
And you may insert it for want of a better,
Or leave it, it doesn’t matter much, I guess …

My wandering thoughts no longer stray
I’ll fix my overcoat buttons;
Secure my old hat as best I may
(And a shocking bad one it is, by the way) …

Gordon opened up the possibilities of contemporary idiom for ensuing poets. And it is all done with an engaging self-deprecation, the upper-class diffidence of a Byronic bushman married to the new world’s scorn of pretentiousness:

All loosely he’s striding, the amateur’s riding,
All loosely, some reverie lock’d in
Of a “vision in smoke”, or a “wayfaring bloke”,
His poetical rubbish concocting.

He could write with an effortless naturalness. “A Basket of Flowers” has a delicate, light note, capturing a beautiful spontaneity of improvisation. Gordon had been staying with John Riddoch at Yallum and Riddoch’s daughter, Lizzie, asked him to write a poem to go with a basket of flowers which was to be sent to her aunt, Mary Lord, for St Valentine’s Day. He wrote it on horseback while returning to Melbourne:

Fresh flowers in a basket—
An offering to you—
Though you did not ask it,
Unbidden I strew …

The garlands I gather,
The rhymes I string fast,
Are hurriedly rather
Than heedlessly cast …

In his elegy “The Late Mr A. L. Gordon: In memoriam”, in the Australasian, on July 2, 1870, Kendall noted “the mournful meaning of the undersong / Which runs through all he wrote.” The nineteenth-century crisis of religious faith permeates Gordon’s verse and informs some of his most memorable work with a haunting note, from “De Te” and “Doubtful Dreams” to “A Song of Autumn”. “A Song of Autumn” was written when Gordon was staying at Toorak with John Power, and Power’s five-year-old daughter, Maud, asked Gordon to pick a bunch of flowers:

You may gather again, my dear—
But I go where the last year’s lost leaves go
At the falling of the year.

Edward Elgar, Percy Grainger and Miriam Hyde all set “A Song of Autumn” to music, and Elgar set another of Gordon’s poems, “The Swimmer”, as one of his “Sea Pictures”:

I would that with sleepy, soft embraces
The sea would fold me—would find me rest
In luminous shades of her secret places,
In depths where her marvels are manifest;
So the earth beneath her should not discover
My hidden couch—nor the heaven above her—
As a strong love shielding a weary lover,
I would have her shield me with shining breast.

Like “The Sick Stockrider”, it combines the exhilaration of vigorous activity and participation in the world of natural forces with that pervasive sense of mortality recurrent in his poetry. Kendall, in his review of Gordon’s Bush Ballads and Galloping Rhymes, preferred “his poems founded on the passion of love. The intensity of feeling contained in two or three of these, we venture to say, is as deeply marked as that in Browning’s most passionate lyrics.” He singled out “No Name” and “Laudamus”.

The Australian bush and ocean, experienced and carefully observed, are the context for the action of Gordon’s poetry rather than the subject itself:

… through the tea-tree scrub we dash’d;
And the golden-tinted fern leaves, how they rustled underneath!
And the honeysuckle osiers, how they crash’d!

he paints Nature with the firm and free hand of a master. Here we have no prolix work, no after touches, no niggling over petty details, but vivid pictures, always tersely expressed, and sometimes conveyed by means of a single epithet.

The “Dedication” to Bush Ballads and Galloping Rhymes offers some sustained evocation:

In the Spring, when the wattle gold trembles
’Twixt shadow and shine
When each dew-laden air draught resembles
A long draught of wine …

The wattle blossom is recurrent in his verse, and wattle was planted at his grave, recalling the concluding lines of “The Sick Stockrider”:

Let me slumber in the hollow where the wattle blossoms wave,
With never stone or rail to fence my bed;
Should the sturdy station children pull the bush flowers on my grave,
I may chance to hear them romping overhead.

In his “In memoriam” poem on Gordon, Kendall wrote that he “sang the first great songs these lands can claim / To be their own.” Clarke wrote in his preface: “The student of these unpretending volumes will be repaid for his labour. He will find in them something very like the beginnings of a national school of Australian poetry.” Australian readers responded. Ronald G. Campbell records in The First Ninety Years: The Printing House of Massina, “Gordon’s Poems was another best-seller, 20,000 volumes being disposed of between 1880 and the end of the decade.” The poems were widely read and remembered and quoted. And not only by the “horsemen” and “every sporting man” of Sir Frank Madden’s recollections. In My Brilliant Career (1901) Miles Franklin refers to him as one of “my sworn friends and companions”: “Gordon, with his sad, sad humanism and bitter disappointment, held out his hand and took me with him.” And she quotes from his “Ye Wearie Wayfarer, Fytte VI, Potter’s Clay” and “Wormwood and Nightshade” in chapter 7 and “Wormwood and Nightshade” again and “Podas Okus” in chapter 38. Humphris and Sladen list some thirty “famous sayings of Gordon” that had passed into popular currency, and his famous quatrain from “Ye Wearie Wayfarer” remains in circulation today:

Life is mostly froth and bubble,
Two things stand like stone,
Kindness in another’s trouble,
Courage in your own.

Leonie Kramer charted “The Literary Reput­ation of Adam Lindsay Gordon”, in Australian Literary Studies (1,1963). Inevitably there was a reaction. John K. Ewers declared in Creative Writing in Australia (1945): “his poetry, although it impressed his contemporaries, has little to say to the present generation”. Gordon was excluded from The Penguin Book of Australian Verse (1958) and Les Murray’s New Oxford Book of Australian Verse (1986). Harry Heseltine remarked somewhat grudgingly in the 1972 Penguin Book of Australian Verse: “Whatever its shortcomings, ‘The Sick Stockrider’ must find its way into a representative anthology of Australian verse, as much for its one-time prestige as for its prototypical failures.” In 2011 Robert Gray and Geoffrey Lehmann included three examples of his work in Australian Poetry since 1788, remarking: “His reputation faded during the twentieth century. He is sometimes left out of anthologies and is now seriously underrated.”

Michael Wilding’s books include the prize-winning Wild Bleak Bohemia: Marcus Clarke, Adam Lindsay Gordon and Henry Kendall: A Documentary, the essay collection Wild About Books and the novels In the Valley of the Weed, Little Demon and The Travel Writer

8 thoughts on “The Poetry of Adam Lindsay Gordon”

The Next Creation Story, Perhaps