The Continued Decline of the Suburban Church 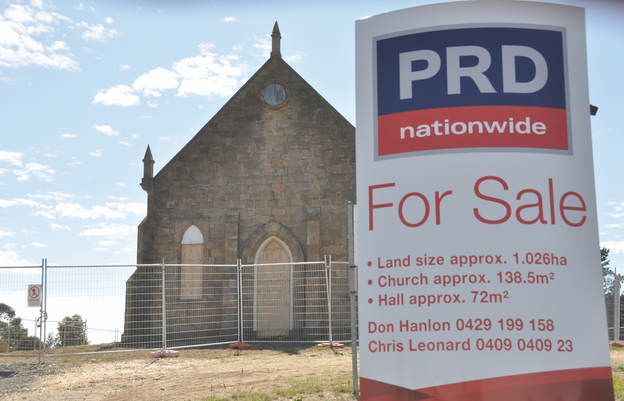 Seven years ago I wrote an article in Quadrant on the slow but steady erosion of the suburban church as a centre of community activity and faith (“The Decline of the Suburban Church”, December 2013). Since then the decline has gathered speed. The local parish with its cluster of youth groups and tennis clubs has all but disappeared. Its influence in the lives of the people who live within its boundaries has been squeezed out by such disparate forces as school or other sport on Sundays, digital self-absorption, wedding ceremonies in gardens and on beaches, funerals at the golf club, the dismissal of Christianity, in the media and education, as an intellectually respectable philosophy of life, and the general indifference to non-material things that the complacence of prosperity seems invariably to generate. Further, the destruction of trust in the clergy as a consequence of abuse scandals—further fostered by the royal commission and still sedulously encouraged by the ABC and other media—though out of all proportion to the number of abusers, has been a body blow to Christianity throughout the Western world.

The suburban church is no longer a magnet attracting local support. Where it survives in recognisable form it has become a minority club for people who are interested in religion or perhaps simply the externals of religious and liturgical practice, on the level of a local philatelic society or kung-fu class.

This essay appears in the latest Quadrant.
Become a subscriber and enjoy immediate access
to all current editions and archives

This definition applies above all to the Anglican and Protestant denominations. It is obviously not true, as multiplication of adherents, sometimes in high places, continues to demonstrate, of the Pentecostalist and revivalist tradition with its specific brand of appeal to a specific type of religious sensibility. Nor is it strictly true of the Roman Catholic Church, where a visible parochial identity rests on the shoulders of the Catholic school system. Yet even here the prospects are far from rosy. Anecdotal examination of the anatomy of the Catholic parish reveals that beyond the parish priest’s function as titular head of the school (though sometimes at loggerheads with principals and the huge taxpayer-subsidised Catholic educational bureaucracy, and now abolished in Victoria where he is lucky to be regarded as a kind of supernumerary chaplain) there is not much connection between the church as a place of worship and the classroom. Few parents attend Mass regularly; few or no children from the school sing in choirs or act as altar servers, a state of affairs self-evidently exacerbated, if not created, by child abuse and the consequent disinclination of parish priests (as one told me) even to speak to a child without adult supervision for fear of an accusation, vexatious or frivolous.

The decline of the parish will sooner or later lead to the closure of the parish church. This is where there is a huge and still under-recognised risk to what conservationists call the built heritage. Churches are some of the best buildings we have. As I wrote in the earlier article, architecturally and aesthetically church closures are a loss to the whole community. When a church is demolished a local landmark disappears—perhaps one that gave an architecturally undistinguished district its only notable building.

The generation that has come into control of public life since that was written—people now in their thirties and early forties—are what the English writer Damian Thompson has defined as the children of the first generation not to have had, in the main, any connection with the churches. Their parents gave them no Christian formation. They have probably never attended a Sunday service; they don’t go, as their grandparents might have, at Christmas and Easter, they do not get married in church or have their children christened. If they had Christian instruction and chapel services at a “church” school many couldn’t wait to put it behind them. “I had enough of that at school” is a comment I have heard repeatedly from alumni of renowned nominally Anglican schools to explain their refusal to attend church in adulthood (one such remark was from a member of an “old” landed family that several generations ago had actually built a church near their property).

On the other hand, some people with intellectual pretensions can’t quite let the religion go. This explains the phenomenon of the “cultural Anglican” or “cultural Christian” occasionally encountered among agnostics in universities. It explains a former chancellor of Sydney University’s remark to an interviewer that although she no longer went to church on Christmas Day she “listened to some Christmas music” (Bach or “Jingle Bells”?).

What both these attitudes amount to is a declaration that the Christian Church is irrelevant to the lives of many people. Christianity is no longer even something to be rationally rejected after an examination of its claims. It has gone beyond that to become meaningless—though outright hostility remains pretty much the preserve of the secularising Left. Most people seem to take the view that religion is all right for those who like it as long as its functionaries are behaving themselves. We have not quite reached the stage where it is generally regarded as pernicious.

If the Church is meaningless it must follow that church buildings are meaningless too, at least to anyone not interested in architecture or history. This does not augur well for their survival once their congregations have disappeared. Churches are being pulled down all over Australia with scarcely a squeak of protest except occasionally from local residents for whom a spire is a visual asset lending tone to the neighbourhood. In Victoria alone the Anglican church has disposed of around one suburban church a year since 2013, some in populous suburbs; the Uniting Church perhaps twice as many. 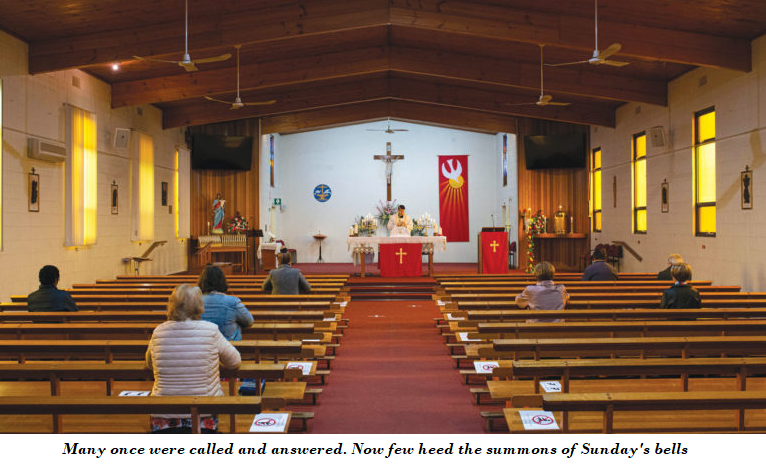 In rural districts the sale of small local churches and the amalgamation of their congregations, which often means the alienation of those who attended the closed church, is a constant reality. Many of these churches are architecturally undistinguished but there are plenty of fine ones. An imposing if incomplete Gothic Revival church in the “historic precinct” of a Victorian goldfields town has been offloaded by the local Catholic diocese just as the town has begun to grow again. If these churches were secular buildings the National Trust would be up in arms. Yet there is no society or organisation in this country dedicated to the protection of church buildings. In England there are several.

There was never a golden age of church-going in Australia, but up until the 1960s congregations were larger, and in the nineteenth and early twentieth centuries, when most of the nation’s churches were built, vast edifices with seating for hundreds were filled every Sunday, and not just one church per suburb or town, but five at least—Anglican, Roman Catholic, Presbyterian, Methodist, Congregationalist and perhaps Baptist and Church of Christ as well, together with some other denominations that have ceased to exist. Those churches were often not only of architectural merit but an object of local pride. People subscribed to the building fund in a way they now expect the government to do for swimming complexes and performing arts centres.

The principal churches that survive from earlier eras are marginally less vulnerable now than they were in the 1950s, when quite a lot were pulled down, despite their architectural and aesthetic merits, because even the larger congregations or more affluent dioceses of those days found them too expensive to maintain (four Anglican churches alone went in now repopulated inner-city Melbourne in a decade before 1970). The churches most at risk now, in every Australian state, are those that were built in the two decades before the Second World War and the two decades after. Those were times of great suburban expansion, when, as earlier, all denominations wanted a place of worship in each locality and the congregations were there to go to them, since most families still maintained some sort of church connection. Catholics went to Mass in large numbers and enrolled their children at the local Catholic school, and Anglicans and other Protestants, even if they didn’t go to church much or at all, usually sent their children to a Sunday school.

In those same suburbs, such customs and habits have all but vanished and it is there that churches, some no more than fifty years old, are most seriously threatened. The young parents who took their children to them when the churches were new are old now or dead. The new generations that buy their houses (and double them in size, a house that was once home to a family of six being considered too cramped now for a family of three) don’t go to church. Many of these post-war churches are buildings of architectural accomplishment, emblematic of the taste of their time.

Most churches, however modest, have at least several fittings such as pulpits, lecterns, organs and stained-glass windows of aesthetic and historical value. What to do with them when a church closes is invariably a headache. Cases are known where they have been installed in another church nearby and then that has been demolished or secularised too. Handing fittings back to the descendants of whoever donated them is seldom a practical option. Occasionally fittings can be reused in the few new churches being built. It is a matter of regret that most are destined to be dismantled or to end up in antiques and “collectables” shops, whence they will find their way into cafés or arty homes as objects of whimsy. 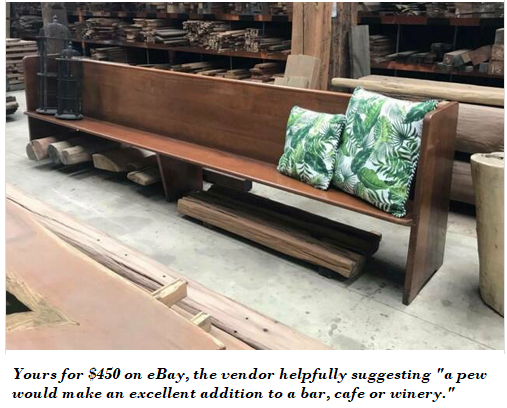 It is unrealistic to expect that all churches can somehow be preserved once they close for worship. But it would be nice if their merits were recognised before they go. To this end, although it is a tiny drop in a very vast ocean, I have begun a website to list vulnerable churches in and around my own city of Melbourne. Something similar in other states and cities would help in a small way to lift the profile of our national church architecture and to illustrate what we are already losing as a society as church-going declines.

You sometimes hear it argued by “heritage” enthusiasts that it is better for a church to be converted to another use instead of pulled down, but unless the church is adapted for worship by another denomination, usually one of a different tradition and ethnicity, as many inner-city and a growing number of suburban ones have been, this is seldom true. I do not contradict myself. I think as many churches as possible should be kept, but kept sympathetically. Part of the function of a building’s design is to express its purpose, and to see a church—and churches are almost always instantly recognisable as such—that turns out on closer inspection to be apartments or a community “arts hub” is an offence against aesthetics and logic. (The same sometimes applies to public buildings such as town halls and post offices.) Besides, such conversions are impossible to achieve without radical internal alteration and usually all-too-visual external changes out of harmony with the original design.

If it can’t be used for services or some function that respects its integrity, better that an unrequired church disappear, and that its existence be perpetuated through photographs, than that its shell linger on, a mutilated witness to our society’s rejection of Christianity.

Christopher Akehurst’s website of churches at risk is at https://heretoday.blog.

6 thoughts on “The Continued Decline of the Suburban Church”

The Achievement of Harry Seidler

Villains and Myths at the Sydney Opera House