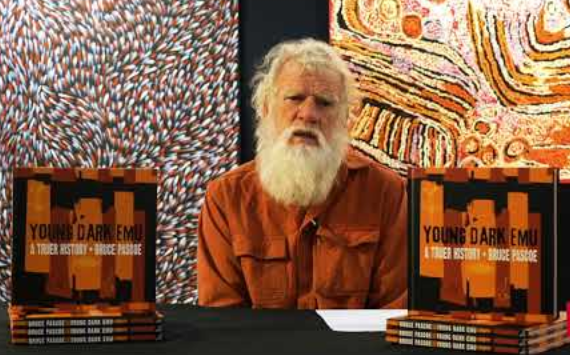 I have been following the Bruce Pascoe Dark Emu saga with increasing despair. My opinion of Australia’s literary scene reached a new low when I read that Pascoe’s little book of bias and untruths, Young Dark Emu: A Truer History is now on the short list for the Eve Pownall Award. This award is given out by the Children’s Book Council of Australia (CBCA) for “outstanding books which have the prime intention of documenting factual material”.

Young Dark Emu is not factual material and is therefore not eligible. Even its subtitle is a lie: a “truer history” it most certainly is not. Pascoe makes many claims in an attempt to support his major premise that Aborigines were agriculturalists, not hunter-gatherers. These claims are easily rebutted by careful research. No qualified scholars or reputable academics agree with Pascoe’s claims. The accepted scientific and academic view is that the Australian Aborigines were hunter-gatherers. The writings of reputable historians both past and present are clear on the subject and easily accessible to anyone searching for the truth.

Most particularly, Aborigines did not “construct a system of pan-continental government that generated peace and prosperity”. Readers of William Buckley’s memories of his three decades living with Aboriginal groups in Victoria in the early 1800s would recall his comments about the violence and bloodshed that were commonplace in Aboriginal life. Buckley was not alone in making such judgments. There was no Aboriginal nation united in peace and harmony, with its people tilling the soil, growing crops and living permanently in large towns of stone houses.

A particularly disturbing aspect of Young Dark Emu is Pascoe’s interpretation of the interaction between the British arrivals and the Aboriginal people. His bias is extraordinary. The situation was far more complicated than Pascoe describes and Young Dark Emu is deliberately misinforming our children and doing them a disservice by pushing his incorrect, guilt-ridden version of our past.

The CBCA awards have been in existence for seventy-four years. In that time, the public has grown to trust the CBCA to make reasoned, professional decisions regarding the merit of the works considered. The winners are chosen because they are worthwhile additions to a child’s library. As a retired teacher with many years of working with children, I recall how we would always purchase the winning books for our school because we knew they would have much to offer our students. The CBCA “stamp of approval” on the cover meant that the book was of consequence. For seventy-four years the CBCA has been perhaps the most highly regarded body involved with quality children’s literature in this country.

The judges of the CBCA awards cannot fail to be aware of the problems surrounding Young Dark Emu. These issues were made public years ago and have been well documented by Quadrant contributors, mainstream journalists and many other concerned Australians.

The reputation of the CBCA awards will be tarnished by this connection with Young Dark Emu.  Pascoe doesn’t deserve a free ride to fame at the expense of the integrity of the CBCA and the truth. In this time of worry and uncertainty, it is more important than ever that we are able to rely on those in positions of trust.

I have recommended Peter O’Brien’s expose, Bitter Harvest: The Illusion of Aboriginal Agriculture in Bruce Pascoe’s Dark Emu, to the judges of the CBCA awards in the hope that they will make their own investigations before arriving at any decisions about the veracity or otherwise of Young Dark Emu. They would be negligent and malfeasant not to do so. It’s bad enough that Young Dark Emu is already being used as a school resource and that our educators are too lazy, uninterested or politically biased to work out that this book is false history, without Pascoe being considered for yet another award.

I have also asked the CBCA to consider withdrawing their support for Pascoe’s book and I would encourage those who care about what their children read to do the same. As yet, I have not had a reply.

“So what is going on here?” I ask myself from my coronavirus-induced isolation. “Why is nobody standing up and shouting to the rooftops that Bruce Pascoe has no clothes? What are you all afraid of?”

I listen for an answer but hear nothing. Nothing but the wind in the bullshit trees.

Why the West is No Longer Educated

The Struggle for the Schools