My Pioneering Role in Sino-Australian Relations 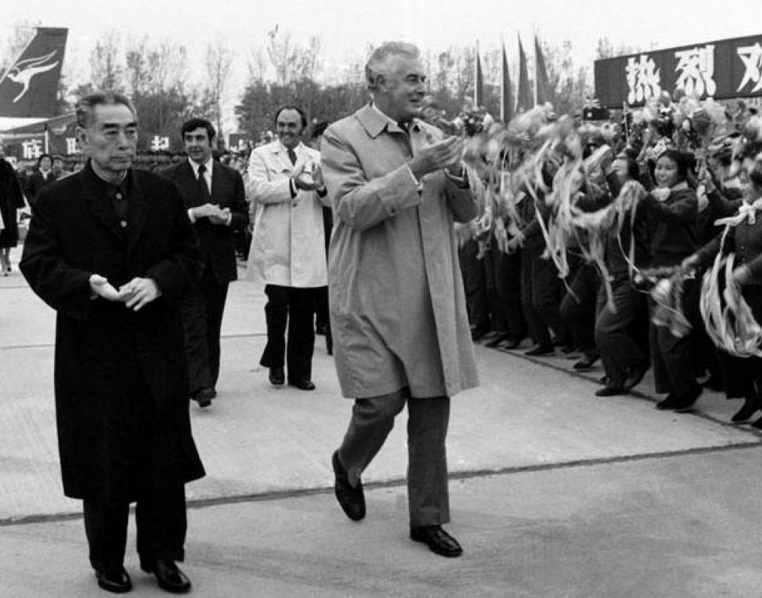 I am a pioneer of Sino-Australian relations. I make that declaration to get your attention, to establish my credentials, and because that’s what was said to me by a member of the Chinese department of foreign affairs during my last visit to China about fourteen years ago.

In 1971 I was assigned by the Australian Associated Press to cover the visit of an ALP dele­gation to China headed by Gough Whitlam. The Cultural Revolution was in full swing. The Chinese chairman, Mao Tse-Tung, was close to death and Gough got Chou En-Lai instead (above).

Some decades later, my wife Prue Goward attended the annual meeting of the Chinese national federation as a commissioner of the Human Rights Commission. She was entitled to take a spouse, which was a mistake. I sat in a corner, the only, and not welcome, male present, and stayed quiet until it got too much and I spoke up, mentioning Chou. I had their attention. You met him, said the federation president. Not only had I met him, but he had shaken my hand, which I held up. The president took the honoured hand between her own two hands, and held it reverently. The next morning at breakfast the observer from foreign affairs greeted me with, “You are pioneer of Sino-Australian relations.” They keep an eye on you. I had looked back after we went through passport control and saw the officer lifting a telephone.

I had transcribed the conversation between Gough and Chou, word for word, and it ran in full in the Australian papers and around the world and on the Reuter wires. It did both men a lot of good.

Now it was time to go, and by then I was sick of being told the May 20 cadre schools, really no more than concentration camps, were a bracing experience, and about the iron rice bowl, which meant everybody had enough rice to eat. I was avoiding yet another briefing from the head of the People’s Congress but he cornered me on the plane to Canton, taking the adjoining seat.

See also: The Trials of a Junior Diplomat in 1970s Beijing

Britain, Australia and two or three other countries whose names I have forgotten were mistaken if they thought they were going to get the same terms for recognition as Canada, he said.

China is a land united by its script but divided by its many languages. Equipped with my portable typewriter and a scrap of paper on which was written for the benefit of a taxi-driver, “Take me to the central post office”, I hit the ground running and in a few minutes had my last story out of China on the wires.

They might have known how to use me, but I could play the same game. After Gough had become prime minister, the Chinese were giving us a hard time in negotiations for a recognition agreement. I wrote a piece saying that Gough had been placed in an embarrassing position, having stuck his neck out in Peking. In hardly any time at all the difficulties vanished.

A yacht had inadvertently sailed into Vietnamese waters and its crew, two men and a girl, had been seized and were confined. I thought it was wrong, as I still do, and wrote that. They were released shortly afterwards. I was enjoying the power of the printed word.

My last moment was when I wrote that Prime Minister Whitlam had arrived in Washington to what I described, accurately, as a low-key welcome. That was played back and appeared in the Washington Post. The next day, when Gough was received at the White House, he got the lot: red carpet, ruffles and flourishes and an honour guard.

One by one the reporters who had accompanied Gough were invited to dinner at the Canberra embassy. My ostensible host was the bureau chief of the Chinese wire service, but the real host was the political counsellor. It was he who asked the questions. I forecast accurately the result of the next election and asked my own question: “Why do you care, Liberal or Labor?” Both were friends of China, I said.

The political counsellor became suddenly emphatic. I was wrong. The Liberals were friends of China and the Labor Party’s friend was Russia. When I applied to work for Malcolm Fraser the relationship with China was about the only question he asked me.

I looked for the right words, and came up with: “If Ginger Meggs lives next door to Tiger Kelly, he doesn’t lean over the fence and shout abuse.” Fraser was amused by the illustration, and clearly was of the same view. He hired me on the spot, and I became his first staff member. 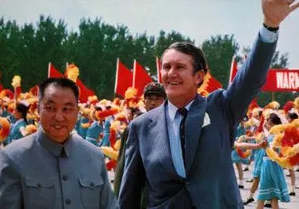 Once elected, Fraser visited China and got the full treatment (right). After the parade in Peking we went to Urumchi in the far west, drove up into the Tien Shan and were received in a huge yurt, a marquee made from felt, and were offered cheese. I may have been the only member of the party who ate it. It wasn’t easy. The banquet was at the airport, where we were served a roasted sheep, which nodded its head as it was borne past the guests.

Then we visited Xian, where the buried warriors were still waiting to be found but where the Qin emperor Huang Ti had begun the unification of modern China.

When I returned to China some years later for the Bulletin I encountered officials we had met on Fraser’s first visit. It was not, of course, coincidence. I learned that the agriculturists who Fraser had offered to help modernise Chinese sheep husbandry in Urumchi had arrived and their contribution had been welcome. Over the years we were at other times a useful friend.

The one I remember is Australia helping China become a member of the World Trade Organisation, but our help in the region is enormous, ranging from Interpol to aviation. Foreign affairs is not a press secretary’s responsibility, but we seemed always to know what we were doing. We do not send civilian airliners into conflict zones, and we spent a lot of money looking for a Malaysian airliner whose pilot flew it into unknown seas until it crashed.

Chou was succeeded by Deng Xiao-ping and a succession of presidents who got on with lifting Chinese living standards, and in the process turning China into the manufacturing centre of the world.

Xi Jinping is different. He should more properly be seen as Mao Tse-tung’s successor, and perhaps in his mind, the successor of Huang-Di who 1000 years ago became the first emperor of Chu Goku, the Central Kingdom, as the Chinese style their country. China is a Western corruption of Huang-di’s dynastic name, Qin.

It’s an entirely new ballgame, and we do not seem to understand it. The recent foreign minister Julie Bishop, now mercifully departed, was the Ginger Meggs of her day. She thought we were still fighting the Cold War and every time she opened her mouth was sharply critical of either Russia and China. It was populism. It was not the way to address a proud people, a proud country and in Xi Jinping a proud leader.

We have crowned this by calling for an inquiry into China’s role into the outbreak of the coronavirus epidemic. I do not know what Malcolm Fraser would have thought of this further insult.

We both signed the condolence book at the Chinese embassy when Chou died. It makes a lot of sense to respond to the Belt and Road international assertiveness by gearing up our own activity in the Pacific. Heading them off at the post is the way our diplomats put it.

In the meantime, I can only hope, in Australia’s interest, that the Sino-Australian relations, to which I would seem to have made my small contribution, still exist and that the Chinese do not proceed with their canvassed suggestions that they cease buying Australian barley (worth $1.7 billion a year) and beef (worth $2.4 billion), while we wait for Xi Jinping to be succeeded by another Chou or Deng.

David Barnett has been a beef producer for fifty years. He has a high regard for our two biggest purchasers of Australian beef, China and Japan, after two years as Reuter correspondent in Tokyo, while being aware that these two countries are not all that friendly with each other.

The Willingness to Be Hated