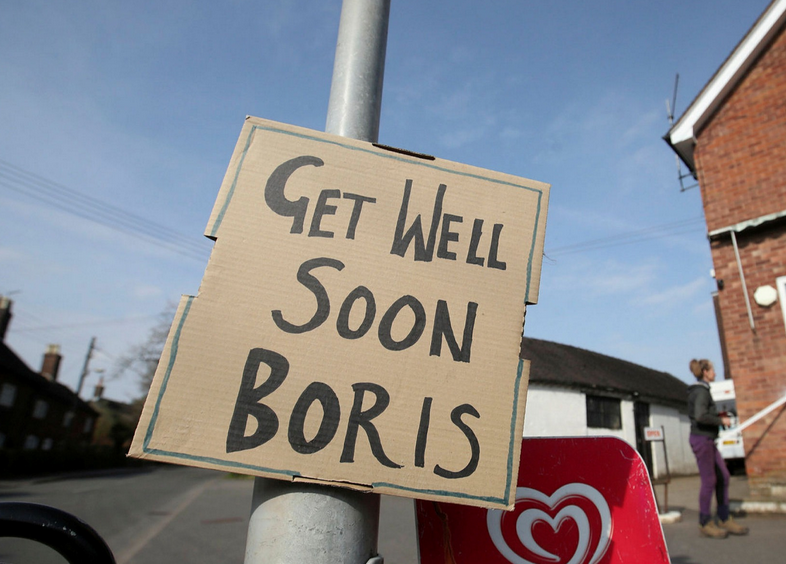 In one remarkable week Boris Johnson was rushed to hospital suffering from the COVID-19 virus, was moved to intensive care when his condition worsened the next day, came near to death, then began to recover and was reported to be “walking about” after six days, and was released the next day to convalesce at Chequers, stopping off on the way to give a powerful emotional address warmly thanking the National Health Service, in particular doctors and nurses who had treated him, several by name, and urging the nation to stay safe at home to defeat the virus. It was a gripping drama, combining Darkest Hour with Emergency Ward 10, and it left people limp with relief and surprised to find that Johnson’s plight had made them realise how much they liked him.

In a year almost as remarkable—May 2019 to April 2020—the Tory party went from its worst defeat in history in the European elections when it won a mere 8 per cent of the popular vote to the weeks before Boris’s medical misadventure when it scored 52 per cent in several opinion polls and could reasonably look forward to its best election result since the National Government’s victory in 1931.

Let me fuse both tales of near-death and resurrection into a single narrative in which the hero, an outcast Tory rebel, ends up as a Prime Minister who dominates British politics more completely than anyone since Margaret Thatcher after her Falklands victory.

The story begins a month before the 2019 European elections when Tory constituency associations began passing motions of no confidence in Prime Minister Theresa May. That rebellion, which spread rapidly, signified that the Tories were a party with a clear Leave majority—something like 70 per cent of activists and 55 to 60 per cent of Tory MPs (if the latter had taken a truth serum).

Those no-confidence votes were important, but national political correspondents treated them as marginal. That was partly because they’re overwhelmingly Europhiliac. Also, they shared a deeply rooted collective sentiment that Tory activists shouldn’t be important, which slid imperceptibly into thinking they couldn’t possibly be important. As a result they were consistently mistaken in predicting that May would eventually get her non-Brexit bills through the Commons and, more generally, that Brexit would be lost in the quicksands of a Remainer House of Commons.

Those calculations, like much else, were shattered by the European elections, in which the triumph of the Brexit Party under Nigel Farage could only have been achieved with the support of both Tory voters and Tory activists. (When a Tory canvasser asked my sister to vote Tory in local elections, she agreed to do so but added she would vote for the Brexit Party in the Euro-elections. He replied: “So will I.”) But the 8 per cent national vote, amplified by more association votes of no confidence and the looming prospect of one by the National Conservative Convention of 800 senior Tories, led in quick succession to May’s resignation, a Tory leadership election, and Johnson’s clear victory on a promise to achieve a real Brexit.

Johnson now had to make a strategic choice. Should he unite the national conservative vote, divided between the Tories and the Brexit Party? Or should he unite the Tory party, divided between Leavers and Remainers? It would be hard to do both, but that’s what he decided to do. He expelled twenty-one hardline Remainers, approved a strong manifesto commitment to Brexit, and rebutted media attempts to weaken it with escape clauses. On the other hand, he wasn’t about to lose Remain-voting Tory seats without a fight. So he also made clear that there would be no general “de-selection” of Remainers, and he invited penitent rebels to stay on board (which they almost all did). This balance established his authority over the Tories, and it hinted that uniting the party was more important to him than uniting the broad conservative vote.

The crunch came in the general election campaign when the Tory and Brexit party managers discussed possible electoral pacts. Farage wanted a simple deal—we’ll stand down in your seats if you stand down in some seats where the Brexit Party came second to Labour. But the Tories never want to have another conservative party to their right, however minuscule. So they refused a deal and threatened to put the blame on Farage for the loss of Brexit unless he withdrew his candidates in Tory-held seats. What would he get out of it? He’d get Brexit. And that, in the end, is what he got, plus 2 per cent of the national vote and no seats. Boris got a majority of eighty-one.

Johnson’s new cabinet reflected this decision to prioritise Tory unity. But long-term electoral trends were pushing him to prioritise broad conservative unity. In the five elections before 2015 the Tory percentage of the national vote had hovered in the mid-thirties. It stayed there in 2015, but Farage’s UKIP took 12.6 per cent. Taken together they won 49.4 per cent that year, just over 45 per cent in 2017, and 49.2 in 2019. The electoral logic was clear: those shifting percentages of non-Tory conservatives, now augmented by northern working-class blue-collar votes repelled by Labour’s progressivism, were the key to long-term Tory dominance. If the party wanted to add both to the Johnson’s new Tory coalition, it would have to do things they wanted, including Brexit of course.

In fact, as Jonathan Foreman documented in our last issue, the Johnson administration mainly dithered—until the coronavirus epidemic struck, when it quickly embarked on a bold policy of massive state spending to carry both industry and citizenry through hard times of a mass epidemic and economic lockdown. By chance almost, these policies reflected what its new supporters wanted—which won’t always be the case—and its opinion poll ratings rose above 50 per cent.

It was at that point that Boris was rushed to hospital. His popularity has since risen to even greater heights. How durable is that likely to be?

The late Ben Wattenberg, who founded the magazine Public Opinion in Washington, summed up why Boris’s new dominance is likely to prove long-lasting even if that of his party fades. There were “moments of political nakedness” in the lives of leaders, he wrote, when the world thought it saw what they were truly made of. Ronald Reagan’s gallant behaviour after the attempt on his life—cracking jokes to his doctors when he arrived badly wounded at their hospital to reassure the public that he and his presidency would recover—was one such moment. It determined how people thought of him, and that had political consequences. Two days later in the Washington Post, David Broder wrote that as long as people remembered the President joshing his doctors, “no critic will be able to portray Reagan as a cruel or callow or heartless man”. Since that was exactly how the Democrats intended to attack Reagan in order to block his tax-cutting budget, they found themselves disarmed and his budget passed with significant Democrat support. Given that Boris enjoys a parliamentary majority that Reagan lacked in 1981-82, he has political clout at least equal to The Gipper’s.

That frees him to change his mind on some of the issues that Jonathan Foreman identified as mistakes made by the May administration but that Johnson shrank from confronting. Much the most important is whether to cancel the government’s commitment to Huawei’s participation in building Britain’s 5G network. That was already opposed by Britain’s allies in the Five Eyes worldwide electronic “eavesdropping” system and opposed by a strong minority of Tory backbenchers. Now that China has shown bad faith in its concealment of the COVID-19 outbreak until it had spread abroad, it’s more or less impossible to justify a Chinese company with a legal obligation to obey China’s rulers on national security matters having direct, if partial, involvement in the UK’s most advanced communications network. Cancelling that should be a slam-dunk.

That’s not true of any of the three long-term problems facing the Johnson government.

Managing an exit from the post-pandemic recession, though much the most important crisis, is too vast for this essay. Handling the pandemic itself means choosing the right balance between a policy that accepts deaths from the virus and one that accepts deaths from economic distress when the numbers of both are unknown. Neither choice nor a mix of them can possibly be popular. But as de Gaulle said, “To govern is to choose.”

That leaves ending the Brexit transition, which also means choosing—this time between risks. Remainers stress the risks of leaving the EU without a free-trade deal when we have to surmount so many other economic obstacles. But we’ll be spending the next few years cultivating new export markets, rebuilding supply lines, creating a regulatory structure to match, and seeking non-EU trade deals. All these tasks will be easier if we don’t need to get the advance consent of Brussels—and many risks in one if we do. Inside the EU we would also have to pay our share of cleaning up the looming Euro-crisis. It’s unlikely to be a fair share. Altogether the balance of risk favours a quick and clean exit.

Boris now has the political capital for the long haul. Will he risk investing his popularity in an independent Britain—and therefore in himself? Or watch it slowly shrink—which is what happens to popularity when it’s put into other people’s banks?

One thought on “The Party of Lazarus”

Lessons from an unfinished war