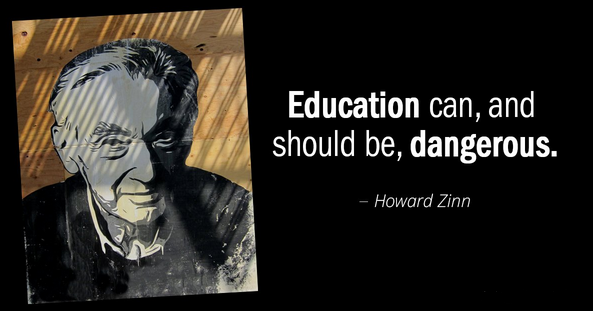 In recent decades Howard Zinn (1922–2010) became probably the best-known radical historian of American history, almost exclusively through the book he published in 1980, A People’s History of the United States, 1492–Present. This gained for Zinn what Mary Grabar describes in her introduction as “Icon, Rock Star” status, making him nationally known outside narrow academic confines. He is also one of the few historians who has generated a comprehensive refutation of his errors and biases, which Mary Grabar ably sets out at length in Debunking Howard Zinn.

Since Zinn’s work is unlikely to be known to most Australian readers, something must be said about his background and historical methodology. He was born in New York in 1922 to Eastern European Jewish parents who were (literally) dirt poor, his father working as a ditch digger and window cleaner during the Depression, and later as a waiter. In his teens, Zinn attended a Communist Party rally in New York, where he was knocked unconscious by charging police, apparently a traumatic event for him. In 1940 he worked as an apprentice in the Brooklyn Navy Yard, where he and others lost no time in organising an Apprentice Association, already demonstrating his outsider’s propensity for radical activism. After the war (in which he was an Army Air Force bombardier, an experience which made him into a lifelong near-pacifist), Zinn attended New York University and Columbia University. He has been widely accused of being an active member of the American Communist Party (which he denied), the FBI taking him seriously enough to compile a 423-page dossier on his activities.

In 1956 Zinn landed a teaching job at Spelman College in Atlanta, Georgia, an institution established in the late nineteenth century for black women. Unsurprisingly, Zinn fails to discuss the college’s background in his autobiography You Can’t Be Neutral on a Moving Train (2002), since the college is named for its chief benefactor, Laura Spelman Rockefeller, whose husband was John D. Rockefeller, in real terms the richest capitalist in American history. The Rockefeller Foundation continued to fund Spelman College: in other words, Zinn the Marxist was being paid at least a part of his salary from the legacy of America’s first billionaire, a man who once owned 80 per cent of America’s oil. Spelman College existed to educate women from the small but growing black middle class that emerged after the Civil War; an influential institution, both the mother and grandmother of Martin Luther King attended it. At Spelman, this white carpetbagging radical, Zinn, lost little time in fomenting radicalism among the students, and was sacked from his teaching post by the college’s (black) president, Dr Albert Manley.

Zinn then went to Boston College, where he became deeply involved in the radical movements of the 1960s, and in 1980 published the book for which he is best known, A People’s History of the United States. Before that book appeared, Zinn was virtually unknown as an academic historian, or as a figure outside radical circles. His book became a best-seller for a work of history, selling more than two million copies. It set out a pervasively radical view of American history in a crudely simplistic way, which has been widely criticised by mainstream academic historians. It was described by one reviewer as a “crusade built on secondary sources of questionable provenance”, while another commented that Zinn “reduces the past to a Manichean fable”. Its very crudity has almost certainly helped to sell the book to an audience looking for black-and-white reasons to hate America, although Zinn’s approach has also left the way open for Mary Grabar’s effective reply.

To be fair to Zinn, his left-wing version of American history has a long lineage. His best-known predecessor was Charles A. Beard (1874–1948), whose An Economic Interpretation of the Constitution of the United States, published in 1913, argued that the capitalist economic interests of the authors of the US Constitution affected the document they produced. Written at a time when the American Founding Fathers were widely perceived by conservatives as demigods, Beard’s book generated fury, and was in part the cause of his resignation from Columbia University in 1917. During the 1960s a new school of left-wing American historians emerged, such as William Appleman Williams, Eugene Genovese (who later made a total reversal in perspective, becoming an extreme conservative) and Eric Foner. Like Zinn they had been heavily radicalised by the Civil Rights and anti-Vietnam War movements, although they were also far more sophisticated, lacking Zinn’s populist crudity, and were well aware of the ambiguities and subtleties of writing academic history, something Zinn totally failed to understand. These left-wing historians also have their parallels in Australia, via a strand which included Brian Fitzpatrick in the 1930s and Robin Gollan and, more eccentrically, Manning Clark in the 1960s, a strand that is currently the dominant school in Aboriginal and women’s history.

The tendentious mendacity implicit in Zinn’s work begins with the title of A People’s History of the United States. To be sure, there are times when the American people can be said to have spoken with a clear voice. For instance, during the past half-century, two presidential elections have been won by landslide majorities. Both were won by conservative Republicans against liberal Democrats, by Richard Nixon in 1972, who trounced George McGovern—for whom Zinn almost certainly voted—winning 520 of 537 electoral votes, and by Ronald Reagan in 1984, when he won 525 of 538 electoral votes. Despite this clear evidence that “the people” had spoken, Zinn mentions Nixon’s win in one sentence. This is indicative of the fact that for Zinn “the people” are credited with asserting their views only when they seem to advocate a left-wing position, never when they support a conservative stance. Zinn devotes many pages to the socialist and radical movements in America between 1900 and 1925 or so, and especially to 1919 when, as elsewhere, it seemed to many as if Bolshevism was sweeping the world. Contrary evidence is, as always, simply ignored, as for instance a year later with the 1920 presidential election, at which Warren G. Harding, the conservative Republican candidate, overwhelmed his Democratic opponent by 60 per cent to 34 per cent of the popular vote, and at which Eugene V. Debs, the Socialist Party candidate, received only 3.4 per cent of the total vote. For better or worse, Harding’s win totally ended the ascendancy of Woodrow Wilson’s liberalism and was, to Zinn’s way of thinking, contrary to History’s unfolding progress, and therefore something to be ignored.

Another pervasive feature of Zinn’s work is his insistence that thorough reform in America towards progressive change, civil rights and greater equality must only come about through a revolution, and that democratic reform measures brought about by legislative action are always half-hearted. Yet his own life experience vitiates this notion, which, like everything else in his retinue of ideas, is simplistic, and taken directly from Marxist-Leninist dogma. According to his autobiography, Atlanta, when he arrived in in 1956:

was as rigidly segregated as Johannesburg, South Africa. Peachtree Street, downtown, was white. Auburn Avenue … was a five-minute ride away from downtown, and was black … If a white person and a black person walked down the street together as equals, with no clear indication that the black was a servant of some kind, the atmosphere on the street suddenly became tense, threatening.

At the time, the entire South was segregated in the same way by law, the rural areas more comprehensively than in a big city like Atlanta. But by the time Zinn retired as an academic in 1988, this had utterly changed, with all legally-prescribed racial segregation swept away by Supreme Court decisions and by the Civil Rights Act of 1964, enacted under Lyndon Johnson’s liberal presidency, coincidentally at the same time as he was fighting the Vietnam War. Between 1907 and 1962, there were no black elected members of the Georgia state legislature. Today there are sixty. Nor can Zinn, or other Marxist radicals, explain why so many tens of millions of hopeful immigrants, including Zinn’s own parents, migrated to the United States throughout its history, with a wall now being built on its southern border to keep illegal immigrants out, in total contrast to the Eastern Bloc states under communism, where walls were built to keep their citizens in.

Mary Grabar has devastatingly set out what Professor Harvey Klehr termed “the lies, plagiarism, violation of academic standards, and simple-minded platitudes” found everywhere in Zinn’s book. Her book is a model study of the egregiousness of the Left. Zinn may have become best known for his attack on Christopher Columbus, who according to Zinn was responsible for the genocide of the indigenous peoples of the Caribbean islands on which he landed. In the United States, many things are named for Columbus, including America’s capital district, the District of Columbia, and Columbus Day, in October, which is a national holiday. Zinn’s attack on Columbus caused great controversy, and also became the template for claims by radicals of America’s allegedly appalling treatment of its Native Americans. But Columbus was almost certainly not responsible for the great decrease in the native populations of the Caribbean. And he never set foot at any time in any part of what became the United States—Sebastian Cabot was the first European after the Norsemen to do so, probably around 1504. Moreover, the American historian Russell Thornton estimated in 1982 that while 53,500 American Indians were killed by whites between 1775 and 1894, this number constituted only 3.7 per cent of the estimated decline in the total Native American population, the great majority of deaths being the result of the introduction of diseases to which they had no immunity, and similar causes. The conclusions of valid historical research of this kind are completely lost on Howard Zinn, ever the propagandist.

Debunking Howard Zinn: Exposing the Fake History That Turned a Generation Against America
by Mary Grabar
Regnery History, 2019, 326 pages, US$29.99

William D. Rubinstein held Chairs of History at Deakin University and at the University of Wales.

Seamlessly through the Quatrains

The Mind of a Mass Murderer