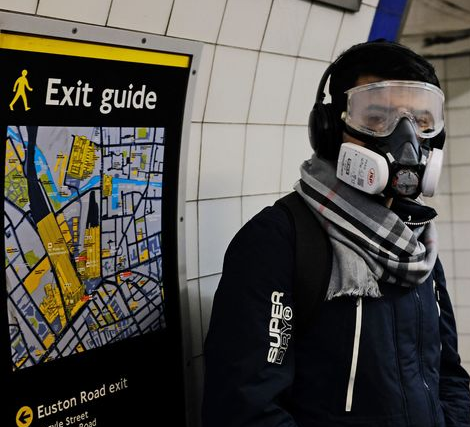 There was a rare cheerfulness in much of the country over Christmas and the New Year. It would be hard to exaggerate the relief that many Britons felt after December’s unexpected election result. Thanks in large part to the people of the traditionally Labour-voting cities of the north of England, the country (and by extension the NATO alliance) had just been saved from a Corbyn government. The Tory prime minister Boris Johnson had won a large enough majority to avoid the political paralysis that had marked the previous six months. It seemed at least possible that, so equipped, this clever but transparently flawed chancer with a talent for winning the affection of ordinary people might achieve great things, or at least things that his more conventional predecessors and rivals had not.

In March, things felt rather different. There have been any number of reminders of the deep problems in British governance and society that recent governments have failed to grapple with. On February 2 for example, only two months after the London Bridge terrorist stabbing incident, yet another Islamist terrorism convict who had been released from prison “on licence”, attacked random citizens in the streets of Streatham. There could hardly have been a better illustration of the disastrous inadequacy of the country’s probation system, its under-staffed, overcrowded, poorly-run prisons, its laughable sentencing laws, its hopeless de-radicalisation programs and its failure to confront the ideological roots of Islamist terror.

Many of these are under the overall control of the Home Office, a department already notorious for mismanagement thanks to a string of astonishing fiascos and scandals going back at least to the beginning of the century that suggest institutional inadequacy of various kinds. The most recent of these was the Windrush scandal, which saw Home Office officials detain, mistreat and even deport hundreds of British subjects who had been in the country legally for more than half a century. The official in effective charge of that debacle, Sir Philip Rutnam, has since become famous as a result of what another civil servant called “going to war” against Boris Johnson’s reformist Home Secretary Priti Patel. The latter found herself confronting a barrage of hostile leaks and anonymous briefings by Home Office sources. It may be true that Ms Patel is a difficult boss and even a bully, as the civil servants claimed, but there is no doubt that Rutnam and some of his civil service colleagues hoped to see her off as they have seen off other ministers who have trespassed on “their” turf and tried to get the civil service to carry out government policy rather than departmental policy. (In the last government, Amber Rudd as Home Secretary and Michael Gove as Minister of Education were both deliberately given incorrect statistics by their civil servants in a successful effort to embarrass them and undermine their agendas.)

Dealing with challenges like the dangerously failing prison system, the schools that fail to educate hundreds of thousands of children, and a Home Office migration and visa machine that combines incompetence with cruelty and occasional corruption would require energy, determination, open-mindedness and the courage to stand up to entrenched interests. Unfortunately, the Johnson government has not shown much sign of such qualities. On the contrary, its hallmarks seem to be inertia, lack of imagination and a kind of fearful sloth.

As for the Prime Minister, after the middle of January he seemed to shrink or even disappear from view. Johnson’s absence from the public stage, including a much-noted failure to go the scene of disastrous floods, seemed so uncharacteristic that some observers of the Westminster scene wondered about his health. Had reaching the top of the greasy pole prompted a nervous breakdown of some kind? Had Boris got what he had always wanted only to discover that he had no idea what to do with it?

To the extent that the Prime Minister has made any important decisions they seem to be the product not of an innovative approach or careful thought, but rather the careless inattention to detail for which he was often criticised as a foreign minister, as a mayor, and as a magazine editor.

Rather than look for fresh, intelligent alternatives to the delayed, hugely over-budget and widely discredited HS2 rail project, the Johnson government limply gave it the go-ahead. For a variety of reasons, including incompetent management of a kind all too common in modern British infrastructure projects, it looks set to cost about £105 million per kilometre. By contrast France’s LGV Méditerranée line cost £17 million per kilometre. HS2 is likely to be so expensive—costing at least £100 billion before it is completed or cancelled—that desperately needed, and politically more urgent improvements to east-west and commuter lines in the neglected north of England will not come about.

The new Johnson government proved even more unimpressive in its handling of the Huawei question. As discussed previously in this space, the British government, under pressure from the country’s ailing telecommunications companies, has been planning to use the Chinese Huawei company to build much of the new 5G mobile phone network. The United States, the other members of the Five Eyes intelligence sharing system, and several of Britain’s European allies are excluding Huawei from their 5G networks because of a well-founded fear that the company, with its close links to China’s equivalent of the KGB, could “weaponise” the system on behalf of Beijing.

A Huawei-built system would be relatively cheap and quick to set up, and so the Johnson administration has decided to go ahead with it, with the Prime Minister mumbling assurances that appropriate precautions will be taken to prevent Huawei installing bugs. Whether the rapid building of 5G wireless networks is really as economically important or urgent as technophile proponents and technologically ignorant politicians assume, is a question that gets little or no airtime.

As I write, the Covid-19 coronavirus has come to dominate the news. Perhaps fearing to promote panic in a population that had already stripped supermarkets of toilet paper, pasta and Ibuprofen, the government has so far been loath to say much about the approach of the epidemic, except to encourage thorough hand-washing. However, there are troubling indications that the British state is simply hoping for the best while failing to prepare for the worst.

A day ago, the government of Italy announced nationwide quarantine measures to limit the spread of the disease, including a ban on public gatherings. Italy is said to be the worst-affected country after China, although it is possible that Iran has more cases. Nevertheless, airline passengers arriving in UK airports from the locked-down areas of Italy were not checked or monitored or met by officials. (One such passenger, a surgeon returning from a family skiing trip in Italy, is believed to have since infected hundreds of people at the teaching hospital where he works.) It could simply be that the authorities have decided it is too late to contain the illness and therefore not worth bothering with new arrivals from countries where the illness has been especially widespread and virulent. However, when the emergency first emerged in China’s Hubei province in January, and there was a genuine opportunity to limit or monitor the importation of the virus, Public Health England and the other relevant agencies also did not trouble to monitor or meet flights from Wuhan and other cities in the region.

In general, public health authorities in the UK seem so far to have been almost as complacent and slothful as those in the United States, where the Centers for Disease Control not only botched the manufacture of test kits but also issued criteria for testing that were so strict that even nurses who cared for coronavirus patients could not be tested. You could be forgiven for wondering if Anglophone democratic societies have a particular tendency to be slow to wake up to major threats to their well-being, whether political, military or biological.

Some of the latest social media reports from northern Italy describe overwhelmed hospitals in which all routine operations have been cancelled, triage decisions have left older patients untreated, frontline staff are falling to the disease and vital oxygen supplies are running out. With luck these alarming reports will turn out to be false or exaggerated, but it would come as a relief to discover that Britain’s NHS is stockpiling emergency supplies of ventilators, oxygen and hazmat suits just in case.

By the time the next issue of Quadrant is on the newsstand, it may be clearer how dangerous the virus really is, if some strains are much more infectious than others, and which countries have chosen the most sensible ways to deal with it. Even if the virus turns out to be less awful than the more frightening projections for its spread and effects, responsible governments should invest in preparations for future epidemics as they once invested in fallout shelters and civil defence plans for a third world war.

There is a science-fiction chill to the name “Covid-19” although it may be a slightly less frightening name than SARS, the last major lethal disease to come out of China. In an earlier age it would probably have been called the Wuhan Virus, in the geographical tradition of the West Nile Virus, Japanese Encephalitis, Spanish Influenza and even MERS (Middle East Respiratory Syndrome).

The British media has tended to shy away from any discussion of why frightening respiratory diseases seem to emerge in China more often than elsewhere, and specifically how and why Covid-19 crossed from the animal world into the human population. The US media, and the New York Times in particular, have been less reticent. Their reports suggest that, like SARS, the disease travelled from bats to carnivores such as pangolins, civet cats and snakes that are considered delicacies in certain parts of China and which were sold in the live-animal “wet meat” market in Wuhan.

Zoonotic diseases, which jump from animal to human populations, have of course been common throughout history. The pigs that the Spaniards carried to the new world were apparently the source of some of the epidemics that devastated the Americas. Ebola and HIV seem to have passed to humans from African animals, most likely thanks to the consumption of “bush meat” in the form of bats and chimpanzees. The human variant of “Mad Cow Disease” or BSE was caused by eating cows sickened by farmers who gave them meal made from ground-up cow and sheep carcases. It is also not a new thing for a deadly disease to spread from China along international trade routes: the Black Death did so in the fourteenth century, although it took decades rather than days to get to Europe.

Still, when the Covid-19 pandemic is brought under control or peters out, it might be a good idea for the so-called international community to ask the Chinese leadership to use its power more effectively to stamp out the culinary fetish for exotic and dangerous carnivorous animals—said to be the heart of a multi-billion-dollar industry—and to enforce higher standards of animal hygiene. After all, it should now be more than clear that, thanks to globalisation, subcultural culinary and “medical” practices in relatively obscure places have the potential to adversely affect the lives of billions of people around the world. Various animal species have already been brought to the edge of extinction by a specific regional human appetite for tiger-bone wine, ground-up rhino horn and similar delicacies that are believed to have quasi-magical powers (in particular to restore male virility); we may now face a costly struggle to prevent our own species from paying a terrible price for such superstitious indulgence.

Jonathan Foreman is a journalist based in London. His previous London Letter was in the December issue

2 thoughts on “Maladies and Diseases”