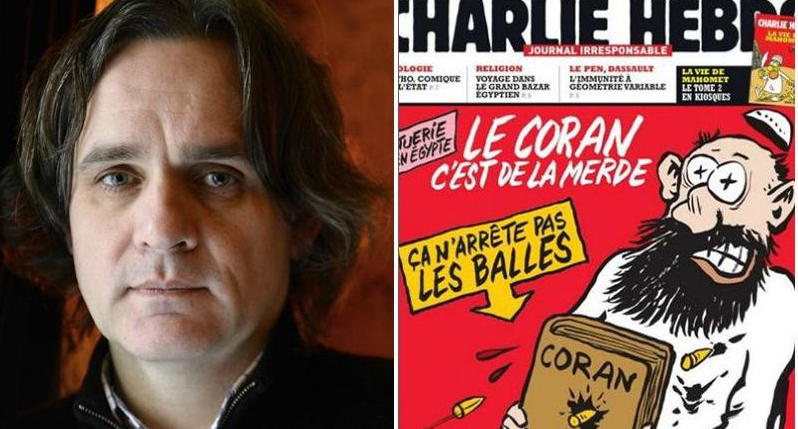 Islamic terrorism is a tunnel with no way out. It’s Wednesday, January 7, again. A door opens, again. Two black-clothed figures holding weapons enter, again. The balaclavas they hide behind have owl-shaped eye slits: popular knitting with motorbike riders. One hundred and nine seconds later they have fired sixty bullets into the Charlie Hebdo offices and, from religious motives, have murdered eleven people—on the floor their broken bodies lie over, on and between the wounded. Later, it will be widely accepted on the French Left that the dead and mutilated brought their fate upon themselves because the magazine had published a cartoon of Mohammed.

Line drawings are displayed on a wall in the cramped office, proposals for the current edition of the magazine. Among them is Charb’s last picture, a sketch of author Michel Houellebecq. His novel Soumission is published the morning his caricaturist is murdered. Months later the office, most of the blood stains cleaned away, is briefly unsealed to allow Riss (above), an artist and magazine editor, back into the room to collect his belongings. He notices that Houellebecq is still pinned to the wall, and then the portrait disappears. When Riss has file copies of the publication transferred to their new office some copies are seen to have been ripped by a bullet, and in an unused wooden box, one side punctuated with a clean round hole, a bullet is found resting peacefully inside.

Riss’s account of the magazine and the massacre, Une minute quarante-neuf secondes (One Minute Forty-nine Seconds), was published late last year. The cover illustration, chosen by the author, is a single, staring, stressful eye—a detail from the magnificent horse portrait in Théodore Géricault’s painting of a Napoleonic officer on his rearing charger. In 2018 Philippe Lançon, the magazine’s theatre critic, published the best-selling Le Lambeau (see Quadrant, December 2018), his account of the massacre and the surgical hell and miracle of having his face rebuilt. Riss in turn talks of his own life, and the massacre, and offers portraits of his murdered friends and colleagues.

When Riss reflected on his situation he noted the obvious: “It seems impossible for many Muslims to admit that Charlie Hebdo was not guilty of any crime in publishing the caricatures of Mohammed.” And he is rightly critical of the “collabos”, from his own Left side of French society, who submit to, or encourage, or politely turn their gaze from the continuing destruction of free speech and traditional French freedoms by Islamic fascism.

On a fine day in January the magazine’s normal weekly editorial meeting was taking place. The writers and illustrators who made the satire sat, slightly cramped, around four white tables. From outside came the sound of two bangs. The shooting of Simon, the webmaster—crippled in 2015 because of a cartoon published in 2006. Riss thought the noises may have come from several heaters he had recently bought for the outside office. The policeman protecting Charb, who had drawn the Mohammed caricature, stood up saying, “That isn’t normal.” And then the office door swung open:

The text continues, second by second, across four pages until:

I am not dead

Riss is wounded, his shoulder shattered, but he refuses to call himself a victim. For a time his life is occupied with the doctors until it is time to return to work in loaned space offered by the daily newspaper Libération, where the Charlie Hebdo editorial team had previously sheltered after their offices were fire-bombed in 2011.

“I thought of coming back to an editorial office talking of terrorism, of fanaticism, of caricatures, of satire, of drawings, of freedom of expression. Everything that happened to us was the result of these burning questions,” says Riss. Instead, many of the staff are more concerned in sharing in the sudden financial success of the magazine. The first post-attack edition sold 6 million copies.

Before the massacre the magazine was financially struggling. After the massacre there were two new problems—too much money, and the satire-makers had been murdered. Subscriptions bounded ahead, from people who hardly knew what they were buying and would ignore future pleas to re-subscribe. Charlie Hebdo, an old 1968 generation magazine, is not to everyone’s taste.

At his first staff meeting, after being warmly welcomed back, a new employee made a speech suggesting the magazine be reformed and shares distributed between them. Then, lowering his voice to a suitably confidential level, he turned to Riss and asked the real burning question, “Is it true that you are paying gift cheques into your personal accounts?”

Riss’s most angry pages, in a passionate and sometimes funny book, deal with the post-massacre events within the magazine. The caricaturist discarded his drawing pen and used a blunt keyboard on his new and surviving colleagues: “Before me burst into the open, like very ripe boils, the true personality of these good people: without the slightest editorial idea to revive the paper, but driven wild by money.”

While Riss was painfully recuperating, a new party line had developed and he found himself on the outside. Three shareholders were dead and only two remained alive. “I was one of them and I had the unbearable impression of being one too many.”

The magazine where he had spent twenty-five years had changed. The dead cartoonists represented the history and tradition of the magazine and their weekly dose of élan that had kept it going was gone. It is hard work being a satirist. “The truth is that there was hardly anyone left in this editorial room strewn with debris [pens, papers and junk emblazoned with Je suis Charlie] to bring the satirical spirit of the magazine back to life.”

Distribute it to all the victims? This question helps to better understand the actions of some. Four years later, I have to make up my mind to admit that within the journal the disappearance of Charlie Hebdo would have satisfied more than we imagine.

Confronted with office back-stabbing and the constant leaking of magazine matters to other Paris papers by his colleagues, Riss contemplates murder. Four months after the massacre, while broken bodies are still suffering, one journalist suggests, “The time for tears is ended.” Riss also recalls colleagues who freely describe themselves as “survivors” when they were nowhere near the office on the day of the massacre. The office infighting had a happy ending: “They had to go. They left. This is what saved them. So I won’t end up behind bars for the rest of my life. And them in a hole.”

Putting his life together was impossible: “Before had disappeared. Before would never return. Before was dead.” Seeking to build a life, Riss takes a holiday. He would make a delightful travelling companion:

Hitler has magnificently painted the Austrian capital. Vienna really is as ugly as it is in the bad paintings of the future dictator …

Warsaw is perhaps the worst place in the entire solar system …

Prague, the city that turns its inhabitants into cockroaches, became repulsive …

The present year began brightly in France. In the traditional auto-da-fé New Year celebrations 1457 cars were set alight—an enthusiastic high score over the previous year’s 1290. Early in January the media slightly remembered the five-year-old massacre and then moved on with the continuing pension strikes and demonstrations which were disrupting their daily commutes.

Less than two weeks after the Charlie anniversary, sixteen-year-old Mila recorded an Instagram video in her bedroom. A fearless homosexual, she was furious when a young Muslim man she had rejected online called her a “dirty lesbian”. Her video reply asserted her detestation of religion, and especially Islam. She was as crude and insulting in her language as a Charlie Hebdo cartoon.

Her outgoing video was shared and exchanged on social media and brought back thousands of incoming hate messages—up to 200 a minute—as anonymous supporters of the religion of peace threatened to rape and kill her. Mila’s home address was published, her school was named and she was warned that the writers of violence were coming for her. She complained to the police and the French justice system opened two inquiries—one looking at the authors of the threats against her, the other investigating her for “provoking racial [sic] hatred”.

An editorial by Franz-Olivier Giesbert in the weekly magazine Le Point asked a pertinent question: “France, the new Pakistan?” Noting that the mainstream media was avoiding dealing with the case and once again avoiding discussing fundamental questions of free speech, he asked if his country was still a secular state.

At the time of writing there have been 255 deaths from terrorism in France since the beginning of 2015, and it is highly likely that this figure will have risen by the time you read this. Islamic terrorism is a tunnel with no way out, and extremism flourishes in the darkness. Abdallah Zekri of the French Council for Muslim Worship and a tireless campaigner against “Islamophobia” says of Mila: “She asked for it, she got it.”

2 thoughts on “How Freedom Dies”