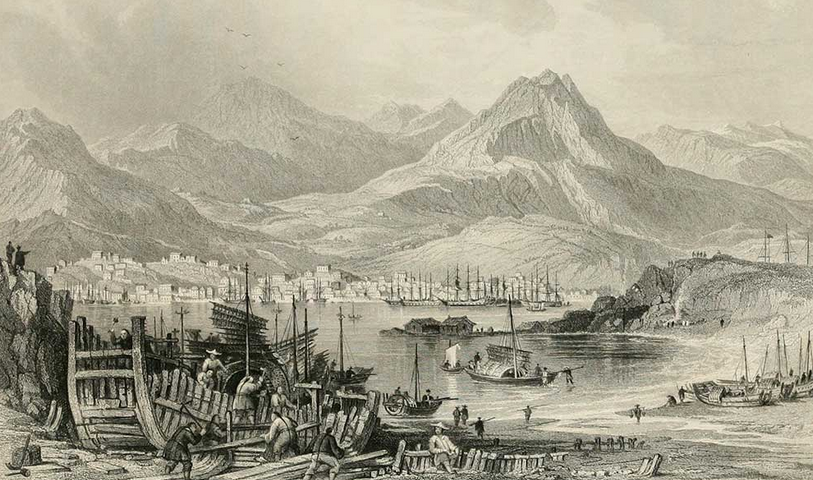 Following the planting of the Union Jack at Possession Point on Hong Kong Island by Captain Charles Elliot on January 26, 1841, the British Foreign Secretary, Viscount Palmerston, dismissed the new crown colony as a “barren rock with hardly a house upon it”.

Forty-two years later in 1883, the seventeen-year-old future Chinese national leader Sun Yatsen was stunned by what he saw when he set foot on Hong Kong for the first time to attend secondary school: “Foreigners had done such marvellous things with this barren rock during only seventy or eighty years whilst China with 4000 years of civilisation had not even one place like Hong Kong.” While he was still a student in Hong Kong, he recalled, “My decision to overthrow the Manchu regime and to establish a republic was made in the year 1885 when the Sino-French war took place.”

But nobody in China at the time felt that way. Censorship then, as now, meant that very few people in China knew about the war. Those who did dared not talk about it. At the favourite haunt of the Chinese elite, the Confucian temple, there was invariably a warning cast in stone: “Scholars must not discuss politics.” That stone tablet was made to lie flat on the ground. Anybody who dared challenge the warning would find himself similarly lying lifeless in no time.

But Sun Yatsen was in Hong Kong and did learn about the war. Witness this question which he had to answer in one of his exams at the Central School in 1886: “State the past and present relations between China and Annam, with special reference to Tonquin.” He was also there to witness the dockyard workers refusing to repair war-damaged French battleships, and watch the boat people and coolies resisting the riot police who wanted to force them to work for the French.

A huge gulf was created between China and Hong Kong when that barren rock was colonised in 1841. This gulf has widened each day since.

Back in 1841, possession of the rock did not ensure the security of the Victoria Harbour. Thus, added to the rock were Kowloon Peninsula (ceded in 1860) and the New Territories (leased for 99 years in 1898) to form what is now Hong Kong.

Now, almost 180 years since its British creation, how likely is Hong Kong to become a barren rock once again because its inhabitants have fled, or died in violent clashes with the police, or jumped off the skyscrapers, or set themselves on fire?

And why does Beijing insist on doing something which is so obviously counterproductive? Are there overwhelming reasons which have left the Chinese leaders no choice but to do what practically everybody in the West seems to think is unwise?

On October 31, 2019, the Chinese Communist Party Central Committee of some 200 members completed its four-day deliberations on China’s future direction. It decided to put into practice the August 31, 2014, People’s Congress Resolution “to exercise comprehensive rule over Hong Kong”. This decision was taken entirely in Beijing, over a thousand miles from Hong Kong, and did not include any significant Hong Kong representation among those deliberating.

The New China News Agency reported this October 31 decision verbatim: “The CCP Central Committee herewith announces that henceforth China must rule Hong Kong strictly according to the Chinese Constitution and the Hong Kong Basic Law.” The means to this end were to “establish and strengthen a legal system and enforcement mechanism”.

The August 2014 resolution had sparked off the almost concurrent Umbrella and Occupy Central Movements in the last quarter of 2014. The failure of those movements to achieve their expressed aim—universal suffrage to elect the Chief Executive of Hong Kong and members of the Legislature—led indirectly to the anti-Extradition Amendments Bill protests of 2019 which endanger the Hong Kong we know.

The reaction of the Apple Daily in Hong Kong to this Party Congress decision was to point out that for the first time the Chinese Communist Party declared that it would not leave Hong Kong alone as hitherto. One of the observers whom the paper interviewed confidently predicted that Article 23 of the Basic Law would be legislated within a year.

Radio and Television Hong Kong quoted a mainland Chinese expert as saying that the security of Hong Kong was now highest on the agenda of the Chinese Communist Party. His rationale was that Hong Kong’s security directly affected China’s national security. He did not explain why this was so.

Local media showed scenes of a fire in the lobby of Xinhua’s office in Wan Chai district, broken windows and graffiti sprayed on a wall. It was unclear if there were people in the building.

Teargas was also fired to disperse a huge crowd in nearby Victoria Park after protesters unearthed a goalpost from a football pitch and metal railings to block the park’s entrance. Several protesters were detained.

Others quickly regrouped in the vicinity, using plastic cones and metal railings to block roads in preparation for possible further clashes with police.

A Hong Kong member of the Chinese People’s Congress Standing Committee, Tam Yao-chung, has confidently predicted that the anti-sedition Article 23 of the Basic Law will be enacted. Another member of that same Congress from Hong Kong, Ip Kowk-him, has emphasised that it is the inescapable responsibility of the Hong Kong SAR government to make sure Article 23 is enacted.

I believe that these are not the personal views of two individuals. I suspect that these views were aired to test the water in Hong Kong.

Sure enough, when no revolution broke out after a few days, the head of the Hong Kong and Macao Affairs Office in Beijing, Zhang Xiaoming, announced on November 9 that “the city’s inability to implement Article 23—a law that prohibits acts of treason and subversion against the Chinese government—and its failure to set up the mechanism to follow through were the main reasons separatist movements are on the rise”. Treason? This is a declaration of war on Hong Kong!

It was the proposed anti-sedition Article 23 legislation which led to the first-ever mass demonstration in post-handover Hong Kong on July 1, 2003, when half a million protesters took to the streets. There were over two million on the streets on June 16, 2019. In the latter demonstration:

The mass of people, many sporting the distinctive yellow umbrellas of the Pro-Democracy Movement, and carrying personal electric fans, braved the thirty-two-degree heat and 80 per cent humidity to march tightly-packed down through the CBD of Hong Kong island from Victoria Park to the government offices in Tamar.

The government’s doubling of its ultra-high-handed pressure on the people of Hong Kong will almost certainly hasten the premature death of the place as we know it. On November 11 a police officer shot a protester in the chest. If a student is prepared to be shot, there must be something worse than death that has propelled him to go on spree after spree of destruction, “fouling his own nest”. What is it?

One cause lies in the “widespread use of torture in China in order to obtain confessions to crimes, especially where the accused were political dissidents”, writes Matthew White in the September Quadrant. The “methods of torture used include beatings, electric shock, submersion in water or sewage, deprivation of sleep, food and water, prolonged solitary confinement and the enforced holding of stress positions, things that do not happen in Hong Kong”.

Hard on the heels of Matthew White’s article, a former employee of the UK’s Hong Kong consulate told the BBC that he was tortured in China and accused of inciting political unrest in the city. The victim, Simon Cheng, said:

I was hung (handcuffed and shackled) on a steep X-Cross doing a spread-eagled pose for hours after hours. I was forced to keep my hands up, so blood cannot be pumped up my arms. It felt extremely painful … I was blindfolded and hooded during the whole torture and interrogations, I sweated a lot, and felt exhausted, dizzy and suffocated … I was seriously bruised on ankles, thighs, wrists and knees.

When the “Two Systems” become one in 2047, the young students of today will be in mid-life. They don’t expect to survive the One System, so they have escalated their violence, hoping against hope that the Hong Kong SAR government will listen. They occupied the campuses first of the Chinese University and then the Polytechnic University.

Beijing’s urging the Hong Kong administration to proceed with the district council elections in November exposes its complete lack of understanding of the people under its care. Noting that such elections are usually contests over livelihood issues, it offered an economic solution to a political problem. But the Hong Kong people see it as a political battle, and more than half of the 452 seats in the district council elections flipped from pro-Beijing to pro-democracy candidates. People of different persuasions simply want to have their voices heard.

Should the central government also insist on repression, both parties will eventually push Hong Kong over the cliff. As Geoff Raby recently wrote in the Australian Financial Review: unless China stops pushing, “the year 2046, the last of the 50-year transition, will begin once the streets are cleared”.

This is an edited introduction from the forthcoming book Hong Kong, 1841–2019: From a Barren Rock to a Barren Rock? by John Wong, Emeritus Professor of Modern History at the University of Sydney.

Portents of War Between China and Japan

A New Chinese 1989 is Nowhere in Sight