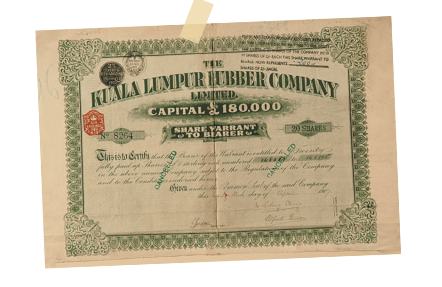 We have all seen news clips of the frenetic activity on the floor of the New York Stock Exchange. Maybe we have even visited Chicago’s Commodity Exchange and learned about the breathtaking, elaborate dynamics by which the spot prices for soybeans or the quotations for “lean hog futures, fob” (free on board) are determined and communicated around the globe within seconds. Fascinating stuff, at least if you are an economist.

Now let me take you back almost fifty years to the strategically important world market for natural rubber. It was determined in Kuala Lumpur, Malaysia, the world’s biggest producer. Back in the early 1970s, pound sterling prices for smoked sheets of rubber (RSS 1 fob) were the world’s key reference indicator for this important strategic raw material, that smelly, gooey stuff from which tyres, condoms, chewing gum, surgical gloves and much, much more are made. This was an era before many different qualities and grades of natural rubber—an alphabet soup of SMR, STR, SIR and so on (Standard Malaysian, Thai, Indonesian rubber)—were published in fine print at the back of the business section.

In 1971, when I went to Kuala Lumpur to serve as economic adviser to the Malaysian Finance Minister, I expected to find somewhere in town an air-conditioned, noisy trading floor where daily transactions were haggled over and recorded, if not by electronic displays, at least on a blackboard with a fast-moving piece of chalk. I was mistaken. All trading, including of the supplies from diverse smallholder plantations, was conducted within a small group of clannish Hokkien Chinese traders, an insider group bound together by trusted traditions. They communicated mostly by hand signs and shunned paper records.

The crucial price information reached world markets through the office next to mine in the garret of the Secretariat Building, in which the Malaysian Treasury was housed in those days. Daily quotations were eagerly awaited by the purchasing managers at Michelin in Clermont Ferrand, France, Goodyear in Akron, Ohio, and Bridgestone in Kyobashi, Japan, as well as eager speculators around the world. Rubber prices fluctuated widely and were an important cost element in many lines of production. Fortunes were made and lost in this breathtaking market.

Every day around eleven o’clock, a sun-tanned, wiry old Chinaman in a yellowing singlet, his spindly legs sticking out of a wide, worn-out pair of British Army shorts—definitely not Civil Service attire—would come up the stairs, trailing a whiff of raw rubber. My colleague, Shan, met 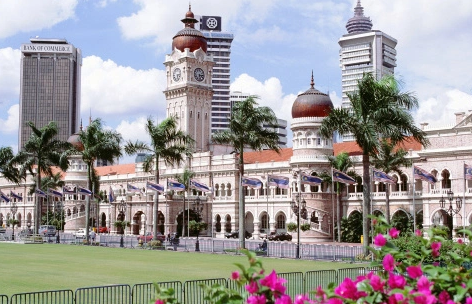 him in a small room near my office located almost directly under the clock tower of the ornate, neo-Mughal Secretariat Building (above) on Kuala Lumpur’s medan, which every tourist to Malaysia must have photographed. Soon, loud voices in Hokkien Chinese amidst laughter could be heard through the walls, several decibels above normal. Our visitor was apparently a bit hard of hearing.

Key information of great commercial value about this morning’s market trends was shouted, so loudly, I sometimes thought, that it might be heard as far away as London. But the information was safe. Nothing would have been understood. Spying profiteers and speculators would have had no chance, as that particular Hokkien dialect was virtually incomprehensible to outsiders. My colleague Shan, though a Malaysian of Tamil heritage, had in his boyhood picked up a working street knowledge of various obscure Chinese dialects, including gutter Hokkien, the language of the tightly-knit rubber-trading fraternity. He was therefore uniquely able to communicate with our mysterious informant, whom most Treasury staff of Chinese origin could not understand.

Immediately after this daily high-decibel and linguistically obscure comedy—or possibly by a mysterious process of osmosis—the key global reference price for natural rubber was transmitted to the world. The Treasury’s tele-ticker spread the news, awaited by financial newspaper editors. If analysts overseas conducted elaborate analyses of markets, based on changing technologies, political manoeuvres and business cycles, the rubber traders probably had no more than an instinctive understanding of it all. The real information was passed under the roof of the Secretariat building, when my colleague jovially coaxed the latest market trend out of the unkempt old fox who apparently had a flair for reading the secretive whims, stratagems and transactions of the obscure, clannish rubber-trading fraternity.

In my day, Malaysia’s government respected free markets and confined its role in the important raw-rubber market almost entirely to recording and communicating the rubber price. Only in the early 1980s, when the overheated raw-material markets of the Vietnam era had simmered down and the second oil shock hit, did international experts, politicians and bureaucrats arrive on the scene. They pretended to know better, and the Malaysian government intervened to “stabilise” the rubber market. Usually, that meant they bought rubber when prices fell and were deemed “politically too low”, but hesitated to offload stock when prices were high. Even well-entrenched politicians fear being accused of spoiling a booming market. The result was that the Malaysian government accumulated massive stockpiles of raw rubber at the taxpayers’ expense. Despite of this—or because of it?—the price of natural rubber slipped between 1980 and 1983 by 40 per cent. Some of the stockpile had ultimately to be thrown away because raw rubber is a perishable commodity. Even Russian buyers, who were normally not fussy about quality and had purchased a consignment, rejected the superannuated stuff. It was dumped at the border.

The Malaysian Exchange, incorporated in 1962 based on colonial legislation, still functions, but after it was used to distort the trend in world rubber prices it lost the lead in determining the price to the Singapore Exchange.

Any reader smirking about the costly political cack-handedness in Malaysia is referred to the history of the Australian wool market, where ill-advised interventions had similar costly consequences. Prices are best left to the complex interplay of buyers and sellers, in whose heads dispersed, ever-changing knowledge is stored, which no official can ever understand or properly interpret.

Wolfgang Kasper, an economist, wrote about immigration policy in the September issue.

The Role of Economists in Causing Economic Stagnation

Money Printing in the Age of COVID-19