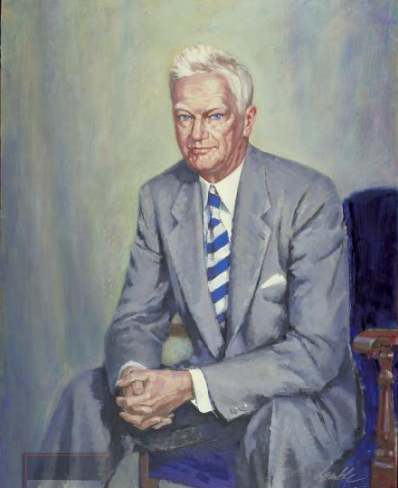 In  a garden not far from where I live stands a steel sculpture representing a small house with a tree trunk rising from its roof. The house and tree are a rusty brown, the nine stylised leaves an olive green. A plaque beside the sculpture describes two themes. The work embodies the fusion of the urban and the wilderness. The house symbolises the head, that part of us which is a retreat for contemplation, and the tree, its branches and leaves, the growth of the thought process.

“The tree of man was never quiet,” wrote A.E. Housman. But here we see no turbulence in nature: apart from birdsong, all is peace. Set in a small bushland valley, the garden, with its stone terraces, nooks and paths, its creek, its plentiful native shrubs, ferns and shady trees, is a sanctuary in suburbia, providing respite for the visitor from “the thoughts that hurt him”.

In this setting, a sculpture combining ideas about the life of the mind with the notion of home and the natural world is well chosen. If ever there was an Australian Literary Garden, this is it.

To gain access to the garden, the suburban wanderer enters by a steeply descending pathway, with clumps of giant bamboo, thick and high, on their left and, on their right, where the slope becomes less pronounced, a brick bungalow, cream-painted, with veranda and olive-green window frames. The house was built by Frederick Lindfield, who lived there with his family between 1915 and 1921. The Lindfields named the house “Kingsfold” after a village in Sussex.

From 1921, the property was owned by Henry Mackenzie Green (above). In that year, Green succeeded John Le Gay Brereton as Librarian at the University of Sydney, following Brereton’s appointment as Professor of English.

For Green, living at Killara meant he could indulge his love of the bush and outdoor activities. He renamed the house “Karral” and with his family he developed the first garden at the property, set in bushland on Shot Machine Creek. The garden was extensive: the creek was reclaimed from wild blackberry, a lawn was established, stone seating nooks and paths were created.

Like Brereton, Green was prominent in Sydney’s literary circles, and belonged to the Casuals Club. His friends included Hugh McCrae and Robert Fitzgerald, and he knew Christopher Brennan, Miles Franklin, Mary Gilmore, Arthur Adams, A.G. Stephens and Bertram Stevens. On Sundays Karral was a regular meeting place for poets and novelists, academic colleagues and students.

In 1928, a few doors away, a family home was built by Arthur Newling “Mick” Swain. In 1895, his father Harry had established a bookshop and stationers, H.C. Swain & Company, near Sydney’s General Post Office. Mick and another brother joined their father in the family business, Mick becoming a principal and managing director. By the 1940s, the business was known as Swain & Co Pty Ltd, and in 1960 merged with Angus & Robertson.

Mick Swain was a keen gardener, bird-watcher and photographer. Having the bookshop meant access to gardening books and publications. From the 1940s to the 1960s, he bought more land in the vicinity and created a terraced garden. The Swain Garden (above) is now in the hands of Ku-ring-gai Council and open to the public.

Due to road construction in the 1930s, only remnant stonework, some steps and paths have survived from the garden created by Henry Green and his family. The bamboo was planted there to veil a large concrete culvert. The idyll in the bushland valley at Killara was to cede to a new chapter in Green’s life. Karral was sold in 1942; Green divorced (as reported at left by the Sydney Sun)  and remarried in 1944, and eventually settled in Victoria. He died in Melbourne in 1962.

The full title of Green’s magnum opus is A History of Australian Literature Pure and Applied: A Critical Review of All Forms of Literature Produced in Australia from the First Books Published after the Arrival of the First Fleet until 1950. It was first published in 1961 and is in two volumes, Volume One covering the period from 1789 to 1923.

The opening sentence of his preface is candid: “It seems worth explaining why so much time and space have been spent upon a subject which even some Australian readers may consider scarcely deserves them.” The project, he writes, had begun nine years before:

The primary reason for undertaking this work was the grave need for serious and systematic criticism, not merely of individual Australian literary works but of Australian literature as a whole: for the presentation of a true picture of it … It is particularly necessary that a young and developing country, especially when it is receiving large additions to its population from without, should become conscious of the national ideas and characteristics that it is developing.

The book is much wider in scope than is usual with histories of literature. In the preface, Green refers to a distinction drawn between “pure literature” and “applied literature”. Pure literature includes poetry, drama, fiction and essays. He quotes from Oliver Elton in A Survey of English Literature (1920): 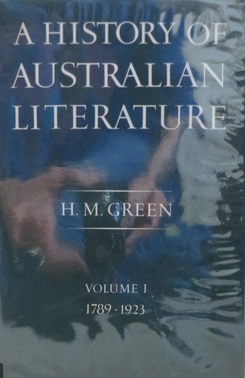 Pure literature creates, or exhibits, or simply muses and converses: it does not strive, or seek to convince, or to harry us into good behaviour (except by the way), or to give even the most valuable information, or to swell the sum of knowledge, or to make a system. Applied literature does all these things: its chief departments are philosophy, science, theology, history, affairs, and scholarship. Its aim is to establish truth of fact, or truth of law, or to influence action directly.

Green’s survey of Australian literature, therefore, encompasses not only the usual forms of creative writing, but also works about education, philosophy, religion, history, science, economics, law, politics and anthropology. He examines criticism, oratory, biography, journalism and the development of a free press from the early days of censorship. Turn to the contents pages and, among the hundreds of names, some are immediately recognisable, but many are not: convict memoirs, children’s stories, industrial surveys, magazines and newspapers, works about exploration in Australia and without: Charles Sturt’s account of his South Australian explorations, Ivan Champion’s record of his expedition along the Sepik and Fly rivers. To name just a few of the cavalcade of writers whose achievements are assembled and analysed: Tench, Harpur and Barron Field, Lawson and Furphy, Ogilvie and Boake, M. Barnard Eldershaw and Henry Handel Richardson, Neilson and O’Dowd, C.J. Dennis, and the emerging author Patrick White with his 1939 novel Happy Valley.

In this Australian treasure chest, Green preserved our intellectual inheritance and chronicled the evolution of our nation’s written word. With painstaking thoroughness, he set to work to create a record of our record-keepers. Taking the rough with the smooth, he methodically worked his way through his subject in all its aspects. He must have worked with gritted teeth at times, as he ploughed through mediocre material. But staunch to his task, he read it, made his assessment, and was as assiduous and fair in his account of it as he was eloquent, perceptive and enthusiastic in his description of the exceptional. I dips me lid to this stout-hearted man of letters. 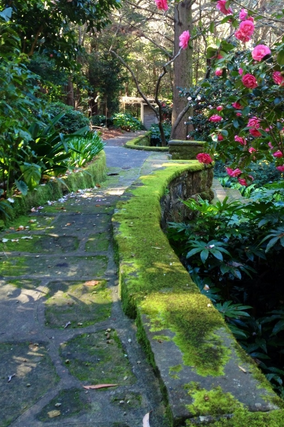 I quite often visit Mick Swain’s garden. I stroll down the sloping path (left) at the entrance, bamboo to my left, bungalow to my right. I look up at the veranda and imagine a group of visitors enjoying each other’s company there on a Sunday afternoon in the 1920s. Which members of our Australian literary pantheon are among them—Victor Daley and Bertram Stevens, perhaps, sitting there comfortably, immersed in an interesting discussion about recent works, or perhaps setting up a game of tennis or golf?

Like fellow wanderers in the garden, we make our way past the house, following the path winding down the slope, shaded by towering gum trees and cold-weather conifers, crepe myrtle and crab apple. A kookaburra on the wing flashes past, the scent of boronia is in the air, the tinkling of a bellbird sounds as down, down we go, continuing along the path as it wends its way beside the creek, through the graceful curves of the sandstone walls, the tiers of flower beds—camellias, roses, rhododendrons—to the lowest point in the garden.

The crack of a whipbird rings out as we start the ascent to the other side of the garden, past more terraces, past fern trees lit by shafts of sunlight. Then up a narrow stone ramp to the summit, a flat area with a lawn, two benches on opposite ends of a rose garden, and a sundial proclaiming: “Some tell of storms and showers / I tell of happy hours.”

There is no fence between the edge of the lawn and the terraced flower bed below: the land falls away, and we are standing on an elevated platform looking out over another aspect of the valley. We can see the tops of the old bushland trees far above, Henry Kendall’s “far forest rafters”, as they dip and sway gracefully in the breeze.

Very shortly after my father died, I had a dream of green and undulating parkland, with a few trees off in the distance dotting the horizon. In the foreground stood a bench on which my father was sitting with his back to me: he was turning his head to me as I woke up. My initial visit to Mick Swain’s garden took place very soon after the dream. When I first caught sight of the sundial lawn, I could see only one of the benches, and my vantage point matched the one in the dream. I had a notion that this was familiar territory. Dream and reality had merged; it felt quite natural to imagine my father sitting on the bench and turning his head towards me. In the course of my bereavement, the sundial lawn became a place of contemplation and consolation.

I feel a peace fall in the heart of the winds
and a clear dusk settle, somewhere, far in me.

Brennan the wanderer, Kendall and the host of other poets who have contributed to the story of Australian writing—Henry Green gathered them all into the leaves of one literary work. He planted the first seeds of a lovely garden in an Australian city. He welcomed people into his home to share its beauty, people who wrote books of fiction and non-fiction reflecting Australian life. His was the first garden to be established in this happy valley, to be succeeded by a very beautiful garden created by a man in the business of selling books. An Australian literary garden indeed.

Diana Figgis lives in Sydney. She will have an essay, reflecting on aspects and interpretations of “Waltzing Matilda”, in the January-February issue

Australia and the Post-Colonial Novel

Hanging On to the Bitter End

A Brief Note on Poetics in Cormac McCarthy