The Unique Theatre of Stanley Walsh 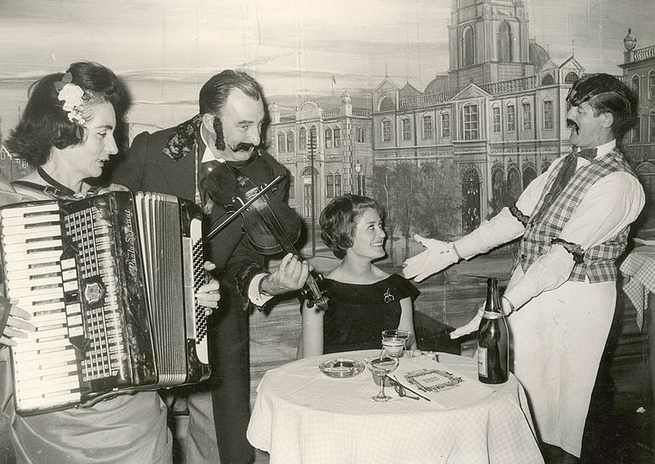 Stanley Walsh is Australia’s least-known most successful playwright. Between 1970 and 1979 he wrote and directed seven melodramas which each ran from almost twelve months to an amazing eighteen months—yet when he died in 2008 he was probably best known for having been a producer of Neighbours.

Born in England in 1938, Walsh was an actor in Z Cars before migrating to Australia in 1964. During the 1970s his plays were performed six nights a week for record-breaking runs at the Music Hall in Sydney’s Neutral Bay until what had seemed like a permanent home for popular culture vanished when the theatre closed down in 1980, a victim of stringent new fire restrictions created after the deadly Ghost Train fire at Luna Park. Walsh moved on to acting, theatre and television production. His theatrical legacy is obscure because the plays were not taken up by professional theatres or amateur groups, and the scripts were unpublished until after his death a friend and colleague, Charles Hambling, set up a website to publicise the works and make the texts available for production.

The emigrant author, drawing on his memories of English stages, produced and directed plays which connected strongly with Australia’s own theatrical traditions. Combining story, music and audience participation, he produced lively entertainments which were not recreations of Victorian melodramas or a send-up of the old theatrical form but a modern innovation. The Music Hall seated 500 people and was furnished with Victorian bric-à-brac. Diners ate well as the play was performed. Fighting for their attention, young actors learnt their craft and old players showed they still had it. The stagings were lavish with a revolve that allowed for rapid and impressive scene changes. Stanley Walsh’s plays raced along on strong story lines, familiar and new music, highly praised performances, dancing, singing and audience participation.

If the ancien régime word melodrama is dropped, Walsh was creating a modern theatrical form that was neither strictly a musical nor a play but a controlled though seemingly freewheeling audience-involving entertainment. He wrote:

The audience is an active participator in the action of the play. In fact their contribution must be taken into account and plotted as carefully as any of the reactions between the characters created on stage. True to convention, and in accordance with the “house style”, actors will address or question the audience, seeking advice or vocal support as equally as they would other characters in the play. In this way it is possible to achieve the maximum audience participation … If the play is successful, the audience’s responses will have been provoked and cajoled from them as clearly as if they were marked in the prompt copy.

In our own theatres audience participation means preventing playgoers filming, texting and posting online during the performance by putting their mobiles into secure Yondr cases that can only be unlocked when leaving the venue.

Stanley Walsh’s Music Hall plays, and their heretical teaching that theatre is about un-boredom, were a 1970s art form that has not lasted, though revivals may prove otherwise and the mechanics of their construction and presentation could still be relevant to the creation of contemporary popular entertainments. Like the English playwright Alan Ayckbourn, Walsh was both writer and director and when he created his plays he fused these two viewpoints. Typically, directors are employed to bugger up a playwright’s text, but Walsh made his plays through a creative schizophrenia in which writer-Walsh collaborated with director-Walsh in a partnership which placed the director at the creative beginning. A story was to be told and the first step was for director-Walsh to start work on a floor plan and scaffolding of acts and scenes, and the distribution and usage of his large cast throughout the play that was still to be written:

Before adding dialogue to the play, the rough storyline is expanded into a comprehensive synopsis, detailing all the character and action to ensure the play works in a traditional form and the series of highlights and climaxes, upon which melodrama thrives, are all correctly placed throughout each act.

When he wrote this in 1974 Walsh could have been talking about his work on Neighbours decades later. In this work plan the bad cop, writer-Walsh, had to ensure that no character escaped his control, creating an impulsive life of its own, interfering with director-Walsh’s careful planning and taking over the play.

The Trials of Hilary Pouncefort, Walsh’s first melodrama in 1970, ran for almost twelve months. (The far better known mixture of musical and vaudeville The Legend of King O’Malley by Bob Ellis and Michael Boddy opened later that same year. Bob Ellis was a good self-publicist.) It is set in Sydney in 1850, with seventeen speaking parts including a hanging-judge villain, a bushranger, a lecherous vicar, assorted ladies of the night, good-hearted convict, pure heroine, and an equally pure (you can tell by the spectacles he wears) military officer hero whose role is made clear when he enters exclaiming, “Unhand that lady, sir.” The villain’s devious plot to marry the heroine is thwarted:

Villain: You vile monster, you may possess my body, but you will never have my heart.

Judge: Who cares about your heart, that’s not what I’m interested in.

That director-Walsh was able to prevent his actors turning dialogue like this into pure ham suggests his skill as a director. All ends happily. Along the way some of the audience may have noted certain resemblances to well-known public figures of the time and reacted accordingly.

The Australian’s drama critic Katharine Brisbane was there:

the audience was happy, and it occurred to me that what was distinctive, even unique about this form of entertainment was its egalitarianism and disorganised anti-authoritarianism … There are not many Australian theatres which offer fare you cannot get anywhere else, but the Music Hall is one of them.

In 1971 not only critics and hungry audiences attended Walsh’s next play, Exposed to Danger or Little Nell in the Klondyke. ASIO agents dropped in for a night out and the play, which ran for almost thirteen months, became a footnote to one of their incomplete spy stories. Preserved in the National Archives, in Volume 2 of the ASIO files on Sydney businessman Henry Fischer, is a copy of the theatre program. The security agency was possibly interested in Fischer’s close friendship with the Music Hall owner George F. Miller. Before moving to Sydney and opening the Music Hall, Miller had been assistant secretary of the Musicians’ Union in Melbourne and the ALP candidate who stood against Robert Menzies in the seat of Kooyong in the 1954 federal election (Miller lost). The curious spy catchers, their own ranks possibly Soviet-contaminated, may have wondered why left-wing Miller invested $50,000 in a right-wing political magazine set up by right-wing Fischer, who also appeared to be a left-wing Soviet agent. Whatever that was all about could make another successful melodrama.

After Exposed to Danger came The Spring Heeled Terror of Stepney Green—long titles were a Music Hall speciality—which ran for thirteen months.

In all the talk about Australia’s burgeoning drama and heroes—Williamson and Hibberd, Buzo, Boddy, Blair etc—one name is being persistently overlooked: a curious omission, because if popularity is the test he is the most successful of them all.

He was right then, and now, for Walsh continues to be overlooked. Sold in Marriage went on to play for fourteen months and Kippax’s review suggests why it pleased audiences:

beautifully judged acting, cleverly inviting audience responses without ever falling into self-indulgence, affectionately exploiting the conventions of last century’s most popular art forms without ever coming within a cooee of high campery.

The acting under Walsh’s tight direction must have been sincerely good.

Sold in Marriage opens in a London seamen’s club with music and dancing. When Jamie, the curate hero, makes his entrance he stands for a moment in the doorway and takes off his parson’s hat: “He is framed in the backlighting from the hallway giving him almost a halo effect.” Scenes change rapidly from seamen’s club to between decks on a sailing ship furnished with convicts en route to Sydney, and harbourside dives and mansions. By the time he arrives in Sydney looking for an innocent young girl sold in marriage to a villain at the age of thirteen she has grown into the play’s third villain and has committed bigamy by marrying again into the upper reaches of Sydney society. Walsh has obviously acclimatised to Sydney and chooses Point Piper for his genteel second villain’s residence. The marvellous ending has the rough colonial whip-cracking first villain picking up his now dead bigamous wife (he was her first husband) and carrying her into the scene-framing doorway of a burning building. After the colonial barbecue comes the happy ending.

Two audience members had an interesting conversation in 1974 at the opening night of The Spectre of Wycombe Manor, the tale of an heiress being driven mad by an evil guardian inside an ambitiously ghostly set inspired by Luna Park and Disneyland’s Haunted House. In her newspaper review Katharine Brisbane wrote:

My friend from the Reader’s Digest says Australia has found a real theatre at last … By real, of course, he means the ultimate make believe with which Sydney’s Music Hall Restaurant has made its name … The aims and taste of the Music Hall are very like the Reader’s Digest Australian edition: family entertainment aimed at as wide a following as possible, with strict rules about being clean and upbeat … In short an honest and developed art form of which the material is the pabulum of the ordinary man.

I thought that Stanley Walsh’s Music Hall melodrama to be more like “real” theatre than most of the performances of Australian plays I have seen, because Walsh has such fine command of basic theatrical technique and structure. As both writer and director he creates a momentum that makes you want to know what happens next: he measures his entrances like a chief of protocol at, say, the Imperial Palace, Tokyo: he handles transitional characters in a masterly way to maintain continuity from scene to scene: his set-piece confrontations between major personages genuinely advance the narrative. And so on.

The message overwhelms and sometimes malforms the medium elsewhere in Australian theatre. If Australian directors and writers attempting more ambitious projects than Stanley Walsh could match him in audience-attentive technique, more people would go to their plays and they would all become rich and famous and live happily ever after.

Devine had picked a winner. It became Walsh’s biggest success and ran for a year and a half.

Two other plays followed, The Beast of Belgrave Square and Lost to the Devil, each playing for about twelve months in a dying theatre building whose audience accommodation and stage machinery had been severely reduced by the new and finally crushing fire regulations. Frank Devine was unfortunately wrong in one point—even though audiences went to Walsh’s plays they didn’t make him famous.

Michael Connor adds: Thanks to Charles Hambling for supplying me with copies of Stanley Walsh’s plays. Play details can be found at his website, stanleywalsh.wordpress.com. An excellent account of Stanley Walsh and his theatre is to be found in Peter Pinne’s five-part series “The Magic of George Miller’s Music Halls”, published in the theatre magazine On Stage in 2010 and 2011.

Theatre is dead, not

Life without the lot