The Silliest Ned Kelly Movie Yet 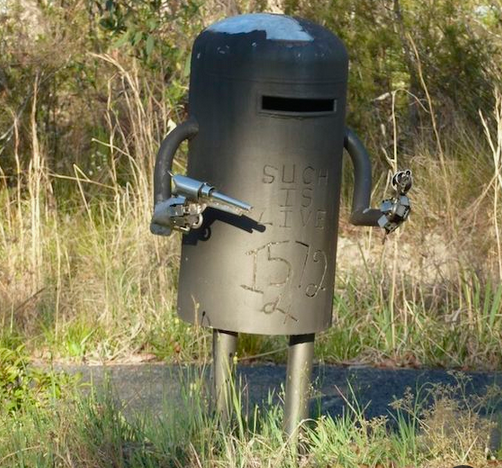 Justin Kurzel’s True History of the Kelly Gang premiered at the Toronto Film Festival on September 6. From the beginning, “true history” became irrelevant, as a written message appeared on the screen declaring, “Nothing you are about to see is true.” The film went on to base its fantasy story on a “memoir” written by Ned Kelly to his fictitious daughter professing to be a “true account of my life”. This sham muddle of truth and fiction is pure make-believe, masquerading as a psychological insight into the criminal mind—the narcissistic mind of a predatory criminal, horse thief, robber of banks and killer of policemen. This flawed film incorporates Ned’s many lies and distortions, expanding on the excuses he used to exonerate himself.

The production company publicity surrounding the film is about as silly as it could possibly be:

Set against the Badlands of colonial Australia where the English rule with a bloody fist and the Irish endure, Ned Kelly (George Mackay) discovers he comes from a line of Irish rebels called the Sons of Sieve, an uncompromising army of cross-dressing bandits immortalised for terrorising their oppressors back in Ireland. Nurtured by the notorious bushranger Harry Power (Russell Crowe) and fuelled by the unfair arrest of his mother, Ned Kelly recruits a wild bunch of warriors to plot one of the most audacious attacks of anarchy and rebellion the country has ever seen. Loved by the people, feared by his enemies and carved in history, Ned Kelly is more than a Robin Hood, he is a f***ing legend.

Kurzel’s “gothic western” opens with a turbulent scene of a man dressed in women’s clothing madly dashing on horseback through a panoramic bush landscape. Why is he dressed in women’s clothing? Because, we are told by Ned’s lawless associates, “Nothing scares a man like Crazy”. “Craziness,” a reviewer writes, “of an elemental, even operatic nature is what gives this film its intensity.” Another reviewer sees only “a nasty crime drama with plenty of grimy characters to keep the stakes compelling throughout. Imagine Bonnie and Clyde in the Australian outback—a disturbing glimpse of criminality.” Craziness and down-and-dirty law-breaking dominate Kurzel’s film.

The plethora of falsehoods is based in Peter Carey’s Booker Prize-winning book of the same title (2001), as interpreted by screenplay writer Shaun Grant’s literary imaginings. Carey said at the time of receiving the award, “It’s the most invented, made-up book I’ve ever written.” In a 2003 interview with Magdalena Ball, he said:

I do have a certain level of anxiety to be writing about Australia, but at the same time writing about Ned Kelly and the late nineteenth century, I felt I had captured the time and place. I wouldn’t call Kelly a murderer despite his killings.

Ned was a self-confessed murderer of three policemen at Stringybark Creek. He recklessly took their lives and stole their watches as trophies to wave before his captive hostages.

Peter Carey’s book always felt like the true spirit of Ned Kelly. Unsentimental, brutal, raw and visceral. His story is one of the great odysseys in history, and I feel excited to be bringing it to the screen with a fresh cinematic eye. I feel privileged to be able to film this audacious and original screenplay.

The film is brutal, raw and visceral in a calculating, myth-endorsing way. To describe Ned’s sordid story of crime, murder and attempted mass murder at Glenrowan as “one of the great odysseys in history” is to pay homage to a violent criminal who would be better forgotten.

Carey invented an Irish rebellious group called the “Sons of Sieve”. One film critic writes that the Kelly Gang take to the bush “calling themselves the Sons of Sieve in a nod to their Irish (rebel cross-dressing) roots”. In his book Carey portrays this type of agrarian protest as widespread and a daily occurrence:

Among social bandits in Ireland cross-dressing was part of the business and not so much disguised. I wanted to shape the story with [Ned’s] mother to make it almost Oedipal, so I changed history to make Ned secretly responsible for his father’s death. The advantage of the dress is that when Ned sees this it unmans his father in his eyes.

Carey is using Freudian posturing and his authorial sense of postmodern relativism to create and tell a Ned Kelly story that was never there to tell in the first place.

Ned and his mates would have been scathing of this queer questioning of their Aussie manhood and would have laughed at the notion of altering their gender identity. How many male pioneers were parading around bush communities in women’s clothing and blackface? To suggest such an outlandish reordering of sexual roles in colonial days would have invited a bloodied nose or worse. The modern obsession with gender issues transposed to a radically different past obscures and distorts people’s lives. Why do it?

Gender-bending and sexual promiscuousness weave their licentious way throughout Kurzel’s film. The dialogue is said to possess a “queer, witching-hour energy”. Costumes transcend period definition and Ned “in tight, androgynous silhouettes, discovers the enemy-startling powers of genderqueer battle garb”. Of course, none of this is true, beyond Kelly Gang members Dan Kelly and Steve Hart occasionally disguising themselves in women’s clothing to gather information on the movements of the police. The rest is Peter Carey fantasy with a bow to modern-day notions of queer sexuality.

In Kurzel’s movie, Constable Alexander Fitzpatrick (Nicholas Hoult), the arch-villain and Kelly nemesis of the bushranger’s story, is yet again falsely portrayed as a corrupt policeman, an inveterate drunk and sexual abuser of Ned’s sister Kate. Kurzel’s film shows a bawdy scene in a brothel, where the friendship between Fitzpatrick and Ned is said to “pack a playful homoerotic frisson”. Nicholas Hoult’s performance as the scapegoated Fitzpatrick is described by one reviewer as “serpentine malignity and silky sexual ambivalence”. He is also referred to as “a sneeringly patrician bad ’un with a suave vocal delivery that appears to channel Hugh Grant”. 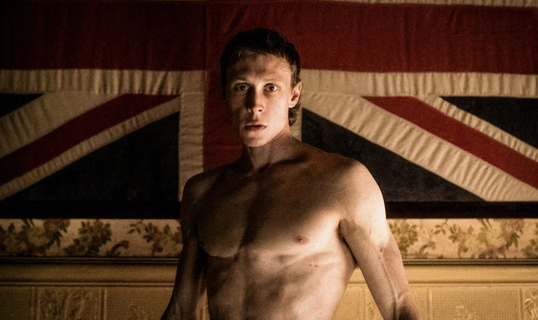 A moment of a “playful homoerotic frisson” from True History of the Kelly Gang.

She’s a survivor, an incredibly powerful woman, who endured the hardship of the land and the weakness of her own husband. She raised her children to learn how to survive and did what she had to do to survive, including sexual favours to predators. She’s this lioness, who loved her children fiercely.

All pioneer women faced uncertainty and hardship in their tough life on the land. They all loved their children fiercely and wanted the best for them. Ellen Kelly’s promiscuous and reckless behaviour was of her own making. She was not the victim of sexual predators; nor can she be seen as a role model for pioneer women. The respectability and decency of most bush women stand in marked contrast to Ellen Kelly’s shanty rowdiness and survival through crime and dishonesty.

Russell Crowe’s Harry Power plays a seminal role in Ned’s villainous descent into bushranging, bank robbery and murder. The real Harry Power said of Ned, “He was with me for a time, but was no bloody good.” Crowe’s Power is overpowering, solidly stout, slovenly in appearance with a scraggy grey beard and ever-present pipe sticking out of his mouth. He is a movie caricature of bushranger Harry, who as far as we know was not Ellen Kelly’s lover. Uncle Harry and the Kelly kids singing an anti-police refrain around the dinner table is clearly a film-maker’s indulgence. It was unlikely to have happened, given that Power disliked young Ned, regarding him as a coward for turning pale and freezing up during a roadside hold-up.

if the law is not lawful then what is truth? This idea of writing your own truth and the only thing that is true is what you stand by, then you can stand by anything. We take the idea and spirit of [Ned] and just sort of blow it open. What Justin wanted to do with the character, I was happy to run with it.

Mackay’s muddled version of truth, where all truth is relative and only your own version matters, plays into Carey’s fantasy world.

Ned’s bushranging story of thievery and murder is set in a larger narrative of colonial repression and cultural genocide. Race subjugation and class struggle are said to dominate every unsavoury aspect of colonial life. Ned courageously rises up as a social bandit saviour: “We are stolen men in a stolen land and we are going to take back what is rightfully ours.” Ellen denounces the oppressors for “trying to bleed our culture out, like they did the blackfella before us”. In the colonial reality of the time, Ned and his lawless family were estranged from most Irish and other pioneer settlers. They showed no respect for traditional values, moral propriety or decent behaviour. They were the shanty ne’er-do-wells of the Greta district and everybody knew it.

Guy Lodge of Variety gave a rousing thumbs-up to the movie:

After multiple failed attempts to capture the legend of Aussie outlaw Ned Kelly on film, Justin Kurzel’s enthralling, unruly vision finally gets it right. Kurzel’s roughhousing, ripely acted interpretation does full justice to the book’s rugged dirt-poetry vernacular and rich biographical particulars. The famous climactic shootout at Glenrowan is envisioned as a fevered nightmare sequence with little sense of spatial reality. The screen is multiply pierced with white-hot beams as bullets penetrate the darkness of Kelly’s hideout, building to a near seizure-inducing lightshow. It’s the high-impact pièce de résistance in an otherwise earthy, blood-and-mud-smeared view of the lawless Outback.

David Rooney of the Hollywood Reporter said of Kurzel’s extravaganza of movie violence and creative mayhem:

The thrashing, uncontrolled quality of the blood-drenched climactic action, while it doesn’t always make for narrative clarity, does fit with the doomed anarchic crusade of the antihero. The Bottom Line: You can practically smell the gunpowder and taste the blood.

Kurzel doesn’t seem to know what to do with the legend of Kelly. The closer we get to Kelly, the less we see. The facts are muddled as hell, and their depiction doesn’t tell us anything about the characters. Kurzel has a cast of strong actors at his disposal, but they’re all stuck in a grimy, dingy movie that doesn’t seem to know what it wants to be about so it settles for some half-baked notions about colonialism, criminality, and family loyalty. True History of the Kelly Gang didn’t need to be a completely accurate account of Ned Kelly’s life. It just needed to be compelling, and it fails.

Kurzel’s film is a movie fantasy pretending by visual effects and fake history to illuminate the man above the legend. History and truth are trashed in the interest of “operatic and expressionistic film-making” fixating on the outlaw anti-hero with a gun in his hand. Ned Kelly would have been personally offended by Carey and Kurzel’s ridiculous portrayal of his life.

My advice is to forget about this whizz-bang dud of a movie. Spend the price of a theatre ticket on a good book and learn about the true history of the Kelly Gang.

An Epic of Ideas

Traditional American Cinema at its Best