Pick a side: Bureaucratic Imperialism or Democratic Nationalism 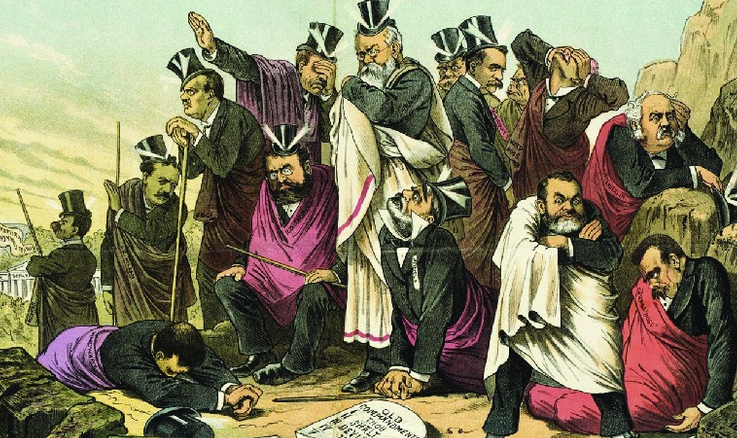 One oddity about the conference on national conservatism held by the Edmund Burke Institute in Washington in July, at which I was a panellist, was that the media treated its central theme of nationalism and nation-states with wary suspicion, as if it were some risky innovation, when it is in reality the status quo of international relations. There are 190 states in today’s world whose sovereignty is undisputed, and only a handful of others. Opinion polls in the great majority of democratic sovereign states show very low levels of support for secessionist movements. And where they are serious political forces—as in Catalonia and Scotland—that usually reflects recent histories of national difference institutionally or linguistically.

Most people still have a mental framework of a world divided into nation-states held together by loyalties called, variously, love of country, nationalism and patriotism. Since the end of the Cold War, however, this framework has been challenged by a very different one given to us by the cultural revolutionaries in our universities, media and cultural institutions. This depicts a new world of global governance and alternatives to nationalism. Maybe nation-states have to be accepted as a fact of international life, they concede. But they deplore love of country as the gateway to evils like racism, war and imperialism almost as if they would deplore romantic love as likely to lead to jealousy, divorce and murder. But they very rarely subject their alternatives to the same kind of scrutiny.

Let me make a stab at it. The largest alternative to any particular patriotism is cosmopolitanism—a patriotism devoted to all mankind and serving a united world without borders. This has recently become a popular left-wing cause under the slogan “Open Borders”, embraced by most of the US Democratic Party candidates in a recent television debate. But cosmopolitanism suffers from a severe disability. In what sense can one love the world? One can love mankind in the sense of trying to advance peace and prosperity. But if we are honest, we’ll admit that some parts of the world have customs and practices which the most tolerant among us find distasteful or alarming. So a love of mankind is at best a somewhat theoretical and even arid love.

Of course, if the world were to be invaded by hostile aliens, we might then develop a kind of Earth patriotism. Our differences might then shrink to very little. After photographs of the Earth taken from space were published, there was an attempt to promote a collective affection for Our Blue Heaven. As an argument for environmental responsibility, it has had some effect. Yet as its partisans complain, it has achieved very little. It’s not hard to see why. When we assert our cosmopolitanism, we are expressing affection for a polity that doesn’t exist—or at least a polity that doesn’t yet exist—and that therefore can’t do things. In other words, the nation for which a cosmopolitan feels patriotism is Utopia.

Utopia might be described as a blueprint for an ideal polity, ultimately a global one, that would replace existing nation-states. An obvious problem with such a global entity is that it lacks most of the things that bring patriotism down to earth and restrain its potential vices. It has no voters, no constitution, no courts, no critical media, no interest groups, and above all no method of throwing the Utopian rascals out. In such an environment of total freedom, the planner and the bureaucrat can design a better society without accountability to anyone but themselves. That kind of politics is what has become known as “vanguard politics”—the politics of a small group of intellectuals who, as Marx hopefully predicted, would understand where history is going and guide the lesser classes to get there faster. That cannot be a democratic politics, even if it has some of the trappings of democracy, because the people cannot be allowed to reject the inevitable future. After all, it’s perfect. Love of a real, if imperfect, nation will always be a better friend and ally to democracy than even the most well-intentioned cosmopolitanism.

In his essay on nationalism, Orwell pointed out that the devotee of this kind of politics—which he called a transferred nationalism—is able to be “more nationalistic, more vulgar, more silly, more malignant, more dishonest than he could ever be of his native country or of any unit of which he had a real knowledge”. And the temptation to yield to such vices will be all the greater when the unit to which he feels his ultimate loyalty is as irreproachable as the whole of humanity.

As a mere blueprint, however, Utopia is not enough. Cosmopolitanism, like Marxism, is a parasitic idea that must occupy a real body if it is to act in and on the world. In Europe that body is the European Union; in the United States, it is the multicultural state.

The established rhetoric of the European Union is deeply hostile to nationalism, which it repeatedly argues is responsible for such evils as war and the Holocaust. Yet the EU has gone to great lengths to create an EU anthem, an EU flag, EU citizenship, an EU currency, an EU diplomatic service and an EU court system, and it plans to create an EU fiscal government, EU taxes, and a host of other EU institutions of governance. These are all the usual attributes of nationhood, nation-states and national governments.

At first glance it seems that the EU is a project to make a new nation out of its twenty-seven member-states even though it lacks the prior sense of common loyalty that usually underpins political nationhood. They cannot surrender their hostility to nationalism—it’s part of the EU’s DNA—but they cannot deny at least some resemblance to nationalism in the EU’s commitment to ever-closer union.

As a result they play uncomfortably with various definitions of the EU and its future. Sometimes they flirt with federalism. But their arrangements are tighter and more centralised than, for instance, those of American federalism. Sometimes they argue that the EU is an entirely new kind of entity in international politics which can’t be confined within traditional categories—such a powerful innovation that it poses an ideological challenge to nation-states like the US. That analysis has some merit, since as several legal authorities have found, the EU combines the institutions of both a nation-state and an international organisation—one cause of its semi-permanent “democratic deficit”.

But a third definition of the EU is more plausible than either. As Yoram Hazony argues in his book The Virtue of Nationalism, which was the inspiration of the Washington conference: combining as it does twenty-seven different nations with different languages, traditions and political cultures under an undemocratic bureaucracy and a centralised metropolitan government, the EU meets the classic definition of an empire. Several European political leaders, including the French Finance Minister and the leading Dutch liberal in the European parliament, have recently conceded exactly that. They are very comfortable with the idea and with the implication that the EU should be governed imperially.

Cosmopolitanism in America has taken on the different form of multiculturalism, the religion of diversity, which was defined by the late Samuel Huntington in his book Who Are We? as “the deconstruction of America”.

As it expands, multiculturalism undermines the institutions of America’s democracy. By denying the legitimacy of the nation-state, it undermines the only polity in which democracy flourishes without prescribing an international system of law-making that is accountable either to the people or to “peoples”. By asserting that a national common culture is oppressive to minorities, it denies the possibility of a national community to which people of different ethnic and cultural backgrounds have assimilated and in which they can understand each other in free political debate. By declaring majority rule obsolete, it not only attacks the central democratic idea, but it does so on the spurious grounds that minorities are doomed to be perpetually out of power. And in practice it is employed to justify applying ethnic proportionalism to all aspects of life, and most dangerously to the political process and the electoral system.

Ethnic power-sharing on these lines is not a new idea. It has been employed in conditions like those of Lebanon and Northern Ireland where there really was no common culture or national community; where cultural, ethnic and religious groups were separated by murderous antagonisms; where simple majority rule might well have resulted in the expropriation or worse of the defeated opposition; and where the constitution was therefore designed to restrain warring groups rather than to make democratic debate possible.

Multiculturalism sometimes looks like this logic run backwards. Since the problems that might justify ethnic power-sharing do not dominate prosperous Western democracies, it fosters those problems as best it can. To the extent that such policies succeed in aggravating group tensions, however, they create a need for a class of bureaucrats to smooth them out with policies of redistribution and opinion management.

By a curious symmetry, America and Europe seem to be moving from opposite situations to a similar political outcome. America today is still a single continental nation-state united by a common culture; Europe is a continent divided into a number of culturally distinct nation-states. Both seem to be evolving into continental states, politically united but culturally diverse, in which under cover of democratic forms, remote bureaucratic elites govern electorates divided into mutually incomprehensible and perhaps hostile linguistic tribes. Of course, like all such grandiose schemes of social engineering, multiculturalism cannot ultimately succeed. But it can cause a lot of damage in the course of failing.

And if bureaucratic imperialism is the alternative, democratic nationalism looks pretty good.

8 thoughts on “Pick a side: Bureaucratic Imperialism or Democratic Nationalism”

How to Win Elections without Getting Most Votes