A New Chinese 1989 is Nowhere in Sight 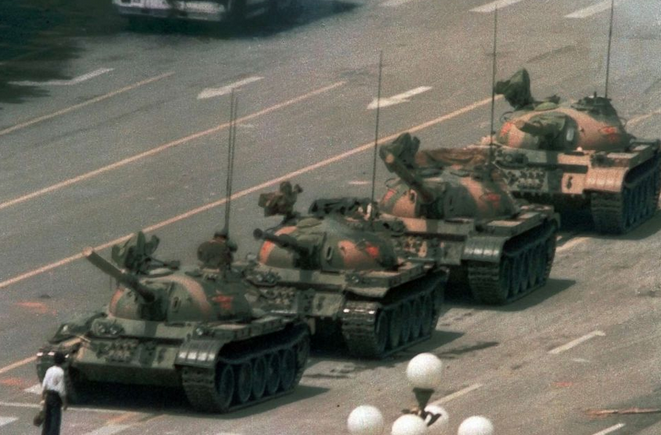 In 1989, protests engulfed the communist world. In China, there were demonstrations for further liberalisation in more than 300 cities. For weeks, students occupied Tiananmen, the colossal Beijing parading square. At first, the army did not succeed in breaking through the barricades set up by sympathising Beijingers. But on the night of June 3 and 4, the army was under orders to break through at all costs. Hundreds of thousands of soldiers moved upon tens of thousands of students and workers, who had armed themselves with sticks, stones and Molotov cocktails. Tiananmen fell. The bodies of young people—workers, students, soldiers—lined the boulevards leading to the square.

Now, thirty years later, nothing of that lost fight for freedom is visible at Tiananmen. Tourists take selfies under the watchful eye of police officers and surveillance cameras. And while the Western media commemorated the events of 1989, Chinese public life avoided the subject; though Chinese internet users could notice that connections slowed in early June due to the temporarily intensified censorship—more filters and manual censorship.

The contrast between now and thirty years ago is sharp. Whereas the Chinese Communist Party had almost fallen apart in 1989, its control is now tighter than ever.

On the mainland, that is. The rebellious Hong Kongers bear the flame of 1989. They can only do so, however, because Hong Kong falls outside the real Chinese censorship system under the “One country, two systems” framework. The protests cannot easily spread to the mainland, not only because the Hong Kongers have a haughty reputation and therefore fail to inspire mass sympathy among mainlanders; but also because the censorship and control of the Party are too strong on the mainland for liberal democratic ideology to spread there.

Of course, it is not that mainlanders never hear anything they are not supposed to hear. Even most youngsters know “something” happened in 1989. And news of the Hong Kong protests has for months been trickling in through informal channels. The mainland state media eventually admitted, albeit tersely, that there had been some unrest in Hong Kong—instigated by “foreign forces”, of course.

The foreign-forces card may be effective, but the CCP’s real power lies in its structural control over public attention. The CCP cannot control all information flows, but it has enough resources to safeguard the mainland from any organised counter-voices.

Why is the CCP’s censorship so effective? Western media invariably highlight the latest technology: algorithms scan social media for forbidden words; street cameras connect to face-recognition software; a planned national social credit system will put a score on people’s behaviour. Yes, the technology sounds scary, but it nonetheless receives disproportionate coverage. The decades-old, structural elements—the propaganda in education and the media and the millions of party officials keeping an eye on all sectors of society—still carry most of the weight.

These structural, more “societal” elements receive little attention in the Western press, and outsiders easily overlook them. I only began to understand their significance after I had lived in China for a few years.

Take daily news broadcasts, which traditionally have three parts. The first is items about Chinese politicians who are somewhere for some meeting or ceremony. Mentioned is a general theme, such as “the economy” or “anti-corruption”. But what exactly was discussed? Which questions were on the agenda? That is missing from reports. As a result, you know too little to be able to reflect on anything, but you do get the impression that the leaders work hard. After all, they were somewhere again, doing something.

The second and third parts of the news are, respectively, positive domestic items and negative items about foreign countries. In China, the numbers are up again; abroad, there was more trouble. Terrorist attacks in Europe and the Middle East receive thorough coverage. And if protesters abroad clash with the police, as in Egypt in 2011, the news describes the violence, but not the ideological motives. Because of all the graphic images and figures on casualties and material damage, you can no longer see the forest for the trees. That is, you forget to ask yourself what it was people are protesting about. Stripped of context, the picture you get is that of a chaotic outside world full of meaningless violence, versus an orderly China. You’re lucky to be governed by the CCP.

When I was working for the Sociology Department at Peking University, I was also once pacified a bit, though it concerned a rather trivial issue. On my WeChat timeline, I had complained that “the boys of the CCP” had closed the convenience store in my apartment complex. The shop-owners had unexpectedly been ordered to close down immediately. Such things occasionally happen. As the Chinese bureaucracy is a nightmare, many shopkeepers and cafe owners operate based on informal agreements with (and payments to) individual Party officials. These agreements can, however, expire at any time, for example, because the officials get transferred. Anyway, I had written bad things about the CCP on my WeChat timeline. Boom—a reassuring message from the research co-ordinator of my sociology faculty: a new convenience store would open up just around the corner.

Great, but how did the faculty’s research co-ordinator, who lived somewhere else, know so much about shops in my apartment complex? She was a Party official. I imagine that after seeing my grumpy post, she informed herself through her Party contacts of the situation and then heard about the new store with which she could reassure me. I was surprised by her intervention, though I had known of her political function; I had seen the Party manuals in her office. Part of her job was to keep researchers like me happy and on track. As trivial as the matter was, it shows that she would probably be the first station on the pacification train if I were to become persistently troublesome. But I’m not so difficult; I just went to that new store for my fruit yoghurt and kimbap.

A Beijing artist told me she had been in trouble years earlier with a satirical video about Chinese students abroad. A group of agents treated her to a series of semi-voluntary dinners, during which they overwhelmed her with compliments. The men told her she had so much potential; if only she stopped choosing the wrong subjects. They offered a deal: if she would erase the old video and make a new—positive—one about Chinese students abroad, then they would finance it. She took the money, but she didn’t make a new video. Instead, she used the money to go backpacking in Latin America. When she flew back to China two years later (broke, I imagine) she feared the worst—but no, she was not taken aside at the airport. It turned out everyone had lost interest in her case.

One condition, though: to be leniently pacified, it helps to be highly educated, live in a big city, and belong to the Han majority. The CCP has little patience with Uighurs, Tibetans and the rural poor. If you are a Muslim man in Xinjiang, any minor infraction can get you interned. The CCP can also be quite cruel.

This is the convenient separation suggested by former Trump adviser Steve Bannon. Bannon argues for an escalation of the trade war and demonises the Party, while claiming to have nothing but sympathy for the Chinese people. In an interview in March he said: “The CCP has absolute total control of China. This is not about the Chinese people. The Chinese people are the most decent, hard-working people in the world. They are enslaved now by a totalitarian dictatorship.”

In reality, the Party builds in part on a broader political culture; the political system and cultural values interact. Many Chinese people who would want to be fully informed themselves, nonetheless judge the censorship good for most of their countrymen, reasoning that those simple souls would otherwise only worry about things. In personal conversations, my Chinese acquaintances often draw an analogy with the parent-child relationship: you would not unnecessarily burden your children with troubling information.

This argument echoes the traditional understanding of leaders as “parents” of the people. The Confucian idea was that the state is a kind of large family (Aristotle, by contrast, on the very first page of the Politics, explicitly rejects the family-state analogy). Hence, subjects were to practise filial piety towards their parents and ancestors and, in parallel and extension, towards Confucian officials and the emperor. The emperor had to honour his ancestors in an exemplary manner. In this way, filial piety was both the foundation of a harmonious society and a mode of governance. The Classic of Filial Piety has Confucius assert that, “The wise kings of the past ruled their kingdoms with filial piety.”

This traditional understanding of harmony and authority, though diluted, continues to shape the political imagination, bolstering the perceived legitimacy of a Party whose official socialist ideology had, ironically, once sought to effect the strongest possible break with the Confucian past. Older Chinese people sometimes, tellingly, describe Party officials they appreciate as fumuguan, “parental officials”—a compliment from the Confucian-imperial era. And many young Chinese, especially young women, cultivate a “cute”, childlike habit.

That the parent-child relationship is so crucial for the political imagination means that it is also politically relevant how people think about children; parent-child relationships are not all alike. Chinese parents are generally more protective of, and less communicative towards, their children than Western parents. In China, toddlers are cute little dolls. Once they get a bit older, they must become study machines. Children are not readily involved in serious conversation.

Now, the paternalistic imperative, “Protect the childlike other against troubling information” is not set in stone. It could lose its influence within one or two generations, because cultures evolve. Illustrative are the rapid cultural transformations that Hong Kong and Taiwan underwent, as well as the liberalisation movement on the mainland in the 1980s. Still, the fact that the future can bring cultural change does not mean that the present is not what it is.

Behind China’s censorship system stand the world’s most powerful political organisation, all the structural advantages and technologies mentioned, and a broader culture of paternalism. No, a new 1989 is nowhere in sight.

Eric C. Hendriks is a researcher in political sociology at the University of Bonn. Previously he worked for Peking University.

Dealing with China’s Turn to the Dark Side

Beijing’s Old Summer Palace and the Nature of Cultural Destruction