In September 1866, a boy walking his dog found a severed head on waste ground between Bathurst and Liverpool streets in Sydney. A piece of burnt torso was found nearby. The victim was a woman, and she had been dead two or three weeks. The Sydney coroner, Henry Shiell, convened an inquest.

Catie Gilchrist’s Murder, Misadventure, and Miserable Ends is the story of such inquests. Shiell, as Sydney coroner from 1866 to 1899, had the responsibility of investigating all unnatural, unexpected or violent deaths. He also investigated all deaths in hospitals and jails. This kept him busy, sometimes heading to several deaths in one day.

The inquest would be held in a nearby hotel or tavern, as was also the case in England. In New South Wales a publican’s licence required him to make such space available. A jury would be assembled of local citizens, and curious bystanders could also attend. Inquests were (and still are) public in New South Wales.

The coroner could request an autopsy, although pathology was in its infancy, so results were not always conclusive. This was all in a world without refrigeration, so in a Sydney summer, a corpse got pretty ripe while the death was investigated. Still, the civilians of the coroner’s jury would clasp their handkerchiefs to their noses and troop into the dead house to see the remains. For the inquest to be valid, the jury had to see the body. 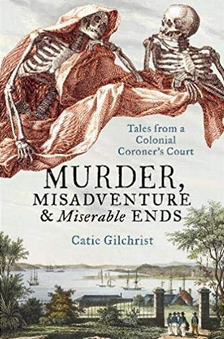 After assessing the evidence, the jury would decide whether the death was by misadventure, illness or foul play. The coroner would issue a verdict.

Gilchrist leads us through some of Shiell’s cases, and the criminal trials that resulted. These cases reveal the variety of issues faced by the coroner. He was never “off duty”, and could be summoned at any hour to deal with a death. (This was a point of contention for Shiell, who regularly petitioned—largely unsuccessfully—for a pay rise.)

Each case offers us a glimpse of life in Sydney in the second half of the nineteenth century. Gilchrist has used reports from the coroner’s investigations, court records (if there was a prosecution) and newspaper accounts to lace together the stories and illustrate the landscape in which they occurred.

Shiell himself was a prototypical son of the empire. A scion of a planter family in Montserrat, he may have been educated in England (although precisely what and where he studied is unclear). His father was a younger son, so no money trickled down to his branch of the family tree. In 1853, like so many younger sons, he emigrated to New South Wales. Taking the path of the connected-but-broke, he found his way onto the ladder of civil service, first as a district registrar, then a police magistrate. He was appointed Sydney coroner in 1866.

The role of the coroner goes back to the Middle Ages, and the public inquest and coroner’s jury form part of the transparency of common law. In nineteenth-century Sydney, the coronial inquest was also a tool of social improvement, with juries able to issue “riders”, or advice for legislation to prevent similar deaths. These could include mandating drain covers, or cow-catchers on the front of trams. Such riders were not always followed, but showed how members of the public (on the jury) felt that lessons should be learned to avoid future fatalities.

Sydney was a lively place back then. The city was growing rapidly: from 90,000 residents in 1861 to 225,000 in 1881. Its residents faced the risks common to all Victorian cities—tuberculosis; poor sanitation; runaway horses; all manner of industrial accidents. They also faced dangers from one another—although as Gilchrist points out, murder was rare. The annual homicide tally was in the low single digits during the 1870s.

When a murder did happen, it was a focus of interest. Particularly ghoulish cases would always draw the public’s attention. The severed-head case was covered exhaustively by all the papers, in lurid detail. The victim turned out to be Annie Scott, murdered by her husband William, who was eventually hanged for his crime. A hundred people watched his execution. For those who couldn’t make it, William Scott was displayed in effigy in Sydney’s waxworks, along with other local villains.

But Sydneysiders then, as now, were more likely to end themselves than each other—and all apparent suicides also came within the coroner’s purview. The harbour took the lives of many, and some suicidal Sydney residents had also discovered the cliffs at the Gap. People jumped (or fell) in front of trains and trams, or used a cutthroat razor literally. In 1869, the Spanish Consul General leapt naked from the upstairs window of a house on Macquarie Street. Doctors attributed the tragedy to mania and temporary insanity (better that than a verdict of felo de se, “self-murder”).

One of the saddest cases is that of Alice Buckland. In 1875 this unfortunate young woman took her life by drowning. She was pregnant and discovered that her lover (who had courted her under an assumed name) was already married. She travelled to Bondi and walked into the sea.

A series of such deaths led to public outcry and calls for changes in the law—to punish the crime of “seduction”, particularly with a promise of marriage. This effort got nowhere (something Gilchrist attributes to many politicians’ own peccadilloes). But there was a growing sense that suicides were to be pitied rather than condemned, and particularly that young women and girls could be victims of society’s moral code. Alice Buckland’s death led to a change in the law regarding suicides, in the removal of the felo de se designation. A verdict of suicide would no longer render the deceased guilty of a felony.

Other women in similar situations to Alice took a different path, and wound up on the coroner’s table as victims of botched abortions. They either died quickly from loss of blood, or a few days later from infection. (Given that a common technique was to shove a spike blindly into a woman’s uterus, it is remarkable that anyone ever survived.) But the loose regulations of the era facilitated such quackery. There was no law in New South Wales against using the title “Doctor” without credentials, and there was money to be made butchering desperate girls. (Fraudulently claiming a medical degree was not outlawed until 1900.)

The other desperate remedy, infanticide, was epidemic. Small bundles were found in alleys and parks, and under trees. These deaths all came before the coroner too. But it was hard with the medical knowledge at the time to prove a child had been born alive and died later, rather than having been stillborn. So barring obvious signs of violence, the mother (if she was ever found) was more likely to be charged with “concealing a birth”—and these small lives didn’t make it into the murder statistics.

Some of the cases covered are not criminal, just tragic. The toddler who drowned in a privy. A publican’s daughter who slid down a banister and hit her head on the landing, dead age seven. Two boys, eight and nine, dead from eating a toadfish at Coogee. Death by fire was horrifically common, often of women and girls when their skirts caught a spark from a fireplace or candle.

In adopting the nineteenth-century style for much of her writing, Gilchrist produces prose more purple than a Prince tribute. An industrial accident is a “melancholy occurrence”. After a pilot boat sinks in a storm, “The ravages of nature’s fury plunged Sydney into a melancholy gloom”. Nobody is in financial trouble but they are in “pecuniary distress”, or succumb to the “demon drink”. We even learn that a market was a “sensory olfactory wonder to watch and behold”. (If you are a stickler for typos and grammar, this probably isn’t the book for you—HarperCollins should have secured the services of a copy editor.)

Nonetheless, each case unfolds like a mystery story, and I found myself gripped. We get glimpses of the kind of people who ordinarily leave only light traces in the historical record. The working class, the uneducated—people whose lives would never make the newspaper, but whose deaths were brought to the attention of the coroner. The testimony from these cases reveals these hidden members of the community, and the manner of death gives us insights to their life. As Gilchrist writes, “it is both curiously strange, but also sometimes, strangely familiar”.

Katrina Gulliver, who has a PhD in history from Cambridge University, reviews books regularly for the Spectator, and has written for the Australian, Reason, the Atlantic and other publications.

The Atavistic Assault on Liberalism