I could start this little observation with a nice comfortable cliché like “It was a more innocent time”, but of course it was no more innocent than the world is now or was a thousand years ago. It was a time when the whole world was at war and the world certainly needed a little innocence and gentle laughter. Perhaps the difference between then and now is that we’ve lost so many more layers of innocence in the years between.

Screen and theatre actor Ginger Rogers was working on the feature film Roxie Hart when the Japanese bombed Pearl Harbor on December 7, 1941, finally forcing America to join the Allies in their battle against fascism and totalitarianism. Even writing that last word is problematic. After all, among those allied against fascism was a totalitarian of the worst order, Joseph Stalin. Nevertheless, America was at war and Hollywood was inevitably going to become a part of the effort to win that war.

This essay appears in a recent Quadrant.
Subscribers had no need to wait for the paywall to come down

Screenwriter Samuel “Billy” Wilder (above, with Rogers) had every reason to feel the need to be a part of that effort. Born into a Jewish family in the penultimate decade of the Austro-Hungarian empire, he’d grown up in Krakow and Vienna and had become infatuated by the cinema and the products of Hollywood in particular from an early age. In 1927, aged twenty-one, he left Vienna for Berlin to work as a journalist but soon moved into scriptwriting. By 1933 he could boast screenwriting credits on thirteen features—his fourteenth credit, on What Women Dream, was removed from the final cut before it screened, as it happens, on Hitler’s birthday.

The rise of the Nazis signalled a prudent departure, first to Paris, where Wilder directed his first feature film, Mauvaise Graine (Bad Seed), and then to board a ship bound for New York, where his brother was already living. Wilder arrived in Hollywood aged twenty-seven and within five years had re-established himself as a screenwriter, his first major success being his collaboration on the script for Greta Garbo’s first foray into comedy, 1939’s Ninotchka.

His co-writer on Ninotchka was Charles Brackett, with whom he would collaborate until 1950. Brackett had served with the Allied Expeditionary Force in the First World War and had been awarded a French Medal of Honour. Going into writing on his return from the war, among other things he was the New Yorker’s drama critic for four years and published five novels before beginning his next career as a screenwriter. He was president of the Screen Writers’ Guild in 1938. As he watched Europe descend once again into war, Brackett was all too aware of how important keeping up the morale of the troops and those waiting at home would become.

The producer of Ninotchka was Arthur Hornblow Jr. An aspiring playwright, in 1927 he’d been hired by Sam Goldwyn to work at Paramount Pictures as a production supervisor and was soon producing what Hollywood seemed to do best in the 1930s, light, frothy films in that witty little genre dubbed screwball comedies.

While Ginger Rogers was on the Roxie Hart set she was approached by Hornblow and Brackett about a film in which they hoped she would take the starring role. It was titled The Major and the Minor. “I loved the story the moment I heard it,” she tells us in her 1991 autobiography, Ginger: My Story:

I told Charlie and Arthur that I had had similar experiences as a child on the Interstate circuit: when Mother and I didn’t have enough money to ride the train at full fare, I used my stuffed-doll Freakus as a ploy and a pillow. The story they were telling me was, in a sense, the story of my life.

Hornblow put Wilder’s name forward as his choice for director. As he had yet to direct a film in 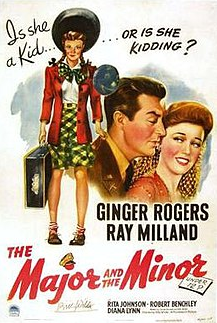 Hollywood, there was no way of knowing if he was up to the task, but Ms Rogers agreed to meet him. They met, got on just fine, and Wilder got to make his directorial debut on a feature film starring Ginger Rogers and Ray Milland. She was already a star, thirty-one years old, and The Major and the Minor would be her forty-seventh movie.

The premise of the film is pretty much as Rogers sketches out in her recollection of that meeting. Her role is that of Susan Applegate, who works in New York City as a scalp massager. While she is working on a client, Albert Osborne, played by the wonderful character actor—and sublimely comic writer in his own right—Robert Benchley, he delivers a line that for some years afterwards became part of the American lexicon in certain kinds of conversations—“Why don’t you slip out of that wet coat and into a dry martini?” Naturally offended, Applegate promptly decides to quit New York and head home to her mother back in quiet, leafy Middle America—Stevenson, Iowa. Her problem? She hasn’t the full fare—so she poses as a child, “Susu”, in order to travel half-fare.

Spotted smoking by a suspicious conductor, she takes refuge in the carriage of Major Philip Kirby, played by Milland, who somehow doesn’t see through either her flimsy story or her barely credible disguise as twelve-year-old Susu, and agrees to let her share his compartment until the train reaches his stop. Kirby teaches at a military academy, though he’s keen to get an overseas posting and see some real action, something his scheming fiancee is keen to ensure doesn’t happen. As luck and a tried and tested plot twist would have it, the train is delayed by a flood and the fiancee and Kirby’s commanding officer drive out to rescue him and inadvertently discover Susu asleep in his compartment’s lower bunk.

It’s obvious where this is all leading, but the light, witty script carries the viewer along with all the usual elements that made Hollywood screwball comedy such great escapist fare during those years, the upshot being that Susu is obliged to continue her ruse, accepting an invitation to join them back at the college until the railway lines are repaired and she can continue her journey home.

Susu inevitably becomes the object of desire for the full complement of cadets at Kirby’s academy. There’s a lovely moment during the graduates’ ball when Susu looks across at the girls from a neighbouring school attending the evening, all sitting in a row opposite, all sporting the current craze in hairstyles, the Veronica Lake, each girl with one side of her face partially obscured by a resplendent sweep of hair. Just five years before, the “pageboy bob” that stylist Louise Mehle had designed for 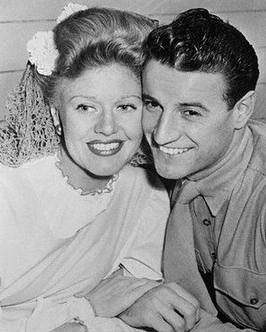 Rogers had similarly swept the nation’s secretarial pools. As it happens, it was Hornblow who had given the aspiring young actress Constance Ockelman her new name—Veronica Lake.

The other inevitability of The Major and the Minor, of course, and the one the audiences expected, was that Kirby and Susan would finish the film happily in love and that Kirby could go off to war knowing someone was “back home” waiting for him, as patriotic a conclusion as anyone in 1942 could have hoped for. Within a year, Ginger too became an actual war bride, marrying Private First Class John Calvin Briggs II  (left) in January 1943.

The Major and the Minor was a critical and commercial success and established Wilder as a director, and he went on to win Oscars for 1945’s The Lost Weekend, for which its star, Ray Milland, also won an Oscar, and 1950’s Sunset Boulevard. As Rogers says of The Major and the Minor in her autobiography, “I believe I had more fun playing this role than any other, with one exception … Kitty Foyle. A lot of my enjoyment had to do with Billy.”

As the September 17, 1942, New York Times review by Bosley Crowther noted, “Never once does either [Milland or Rogers] permit the suggestion of a leer to creep in.” And here’s where all that preamble about more innocent times and the loss of so many layers of innocence comes into this narrative. I’ll let one of Ms Rogers’s biographers make the point. Sheridan Morley in his 1995 book Shall We Dance: The Life of Ginger Rogers writes:

What, of course, Wilder was making, just twenty years ahead of time, was his very own Lolita; but so subtly was it disguised, so slavishly did it follow the Hollywood-comedy conventions of the time, that the code was never cracked.

Raised a practising Christian Scientist, Rogers would have been mortified if for one moment she thought that she’d made a film that even remotely suggested that a sexual relationship with a minor was anything other than abhorrent. It’s also quite plain from her recollections that there was never a moment she thought she was making anything other than a screwball comedy based on mistaken identity, as eternal a plotline as anything from Shakespeare to, well, a good many Hollywood movies before and since.

The problem is that perceptions have changed, and quite rightly. Throughout the film, the original audience—and the contemporary one, viewing it on television—is “in on the subterfuge”—we all know Susu is not twelve!—but contemporary eyes bludgeoned with the revelations of decades of institutional abuse—why, even the more “liberated”, “rebellious” generation growing up with rock ’n’ roll found Jerry Lee Lewis marrying his thirteen-year-old cousin hard to accommodate—cannot fail to be aware of the fact that Milland’s character becomes more than a little smitten by the “child” Susu, just as Humbert Humbert does with Lolita, the difference of course being that Lolita is a child. No matter that the real intent of Nabokov’s novel—a scathing allegorical indictment of the America that the Russian émigré had come to know—has been lost in the scramble to extract every ounce of possible salaciousness from the text.

Then again there’s the issue of Morley’s suggestion that Wilder worked to a very dubious subtext. Wilder was directing a film co-written with Brackett, which must therefore implicate Brackett in that “code that was never cracked”. But their script for The Major and the Minor had actually been taken from a successful play titled Connie Goes Home, written in 1922 by American playwright Edward Childs Carpenter, for which Paramount owned the screen rights. Does that then mean Carpenter too was somehow a co-conspirator to this “unbroken code”?

There’s no going back to any mythical more innocent time, of course. It’s far better that iniquities, abuses and injustices are exposed and that those against whom those iniquities, abuses and injustices were meted out receive the justice that is their right. It’s just a pity that, as a consequence, that universal loss of innocence must impose a subtle sense of discomfort that diminishes something made long ago to bring a smile to a population facing forces that quite possibly could have spelt the end of the free world as it was known, before Lolita.

Michael George Smith is a Sydney-based freelance writer with a background in literature, history and contemporary music. He wrote on the pleasure of reading books in the April 2018 issue.

One thought on “When Ginger Met Lolita”

The Return of Terence Rattigan