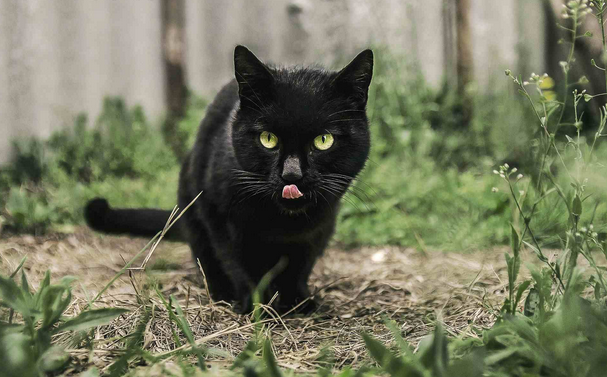 It was during the time that our family suffered a series of misfortunes too numerous and dismal to mention that we and our mother found ourselves homeless and living out of our car.

As chance would have it, a farmer in our district who had recently built himself a vanilla-coloured brick monstrosity, and was feeling uncharacteristically generous, offered us rent-free a derelict outbuilding on his property to live in.

This was not only a farming district, it was coastal, and the old house, which had no doors or windows with glass intact, was beside the ocean. The tide came up close to its timber walls, a prime reason it had been abandoned as a residence years ago.

We could not drive our car down the rutted and heavily treed track that led to the house. We left the car ten minutes from the house and, loaded up with our belongings, we set off on foot through spotted gums, the air fragrant with tea-tree blossom and the salty ocean.

It was here that we met the cat.

She stood in the doorway, large and black all over. She had no idea that she was a cat. She did not move to let us by. She stood her ground. Her shoulders filled the doorway. She looked us over. One large, four small, she seemed to calculate. Moments passed, we held our breath, and then the cat lost interest and walked regally away into the bush.

The cat did not accept any food from us, though we offered her milk and in our monthly buying trip to town we bought cat food. She declined all our offers.

She slept inside the house, always on our beds. Over the next year we were given two other cats, but she showed no inclination to befriend them. She did, however, like dogs. All our friends had dogs and they always brought them along on visits. She greeted them, sat amongst them, and overpowered them. It was obvious they thought her one of their species, a superior dog.

We stopped being curious about what she ate. She never brought home a catch and the old house was free of rats and mice. Since our mother was concentrating on feeding us, she was anxious to get her garden going and pleased that the cat needed only a bowl of fresh water from the tank.

At first we called the cat Colette, blinded by her theatrical feline presence. She never answered to this name and ceased all eye contact when we tried to make it stick.

Finally, we called her Mrs Black.

She became famous in the district. They even talked about her in town. Mrs Black sightings were a major topic of conversation. She was the cat belonging to that odd writer woman who lived with her four children in the old house with no electricity right on the ocean.

Mrs Black. She wandered widely and had other homes that she would stay in for days at a time. If she was walking near a homestead and someone called out, “Hey, Mrs Black!” she would stride into the house and stay a while.

Once she was away for a couple of weeks. We missed her badly. When she came back she walked through our house—still with no doors—and settled herself in the back bedroom where my mother slept. That night she had kittens. Eight of them fought for space at her belly and for the first time she accepted the milk we collected each day from our farmer neighbour.

When the kittens were a few days old she started disappearing again, often during the night. In the morning she would be cleaning herself in the sun until every square inch of her black coat shimmered. Our mother would whisper as if to a lover, “What an exquisite, beautiful cat you are, Mrs Black.”

The cat would arch her head against our mother and they would both stay a while, locked together, eyes closed in the morning sun.

One morning at dawn, down the track, now made wider by constant use, came a group of farmers on horseback, a few of their sons on motorbikes at the rear.

Our mother recognised a posse. “She’s not here,” she told them. “What’s the matter?”

“She’s killing our chooks and now she’s started on the sheep.”

They all had guns. They came into the house, saw the kittens, and waited for Mrs Black’s return. My mother started the fire and made them endless cups of tea. We did not have enough cups so the men passed the cups between them. We children were excited by their fervour.

“Mrs Black’s a killer,” they told us with authority. The sensitive ones tried to break it to us gently that they were here to shoot her.

Mrs Black did not return. The men rode off; they had other chores to get on with, they told each other.

After the sun had gone down, Mrs Black came home. We children saw her go to our mother’s room, stepping lightly over the timber floorboards. Our mother removed the tiny bell she had fixed around Mrs Black’s neck.

Next day at dawn the men returned. Mrs Black and the kittens were gone. The men were angry. They were fed up, they said, with the cat and us. They shook their fists at our mother then they turned their horses around and went home.

Mrs Black did not return.

Our house was comfortable now. We children were doing correspondence lessons from the education department every day. Our mother wrote a story that won a major newspaper short story contest; the prize bought us new doors for the house. The garden was full of tomatoes and lettuces and herbs that we watered from the tank.

“We made it,” said our mother every now and then in the middle of everything.

One day, after we had been to town to buy supplies for the next month, we returned as happy as we’d ever been. But as we came upon our house we got the shock of our lives. Men with a bulldozer were knocking the house down.

“It’s not your house,” reminded the farmer who had given us the house rent-free. He stood there and allowed us to load our car with our life. “You can get a caravan in the caravan park real cheap.”

We piled our belongings onto the roof rack and filled our washing basket with food from the garden before the bulldozer wiped it out.

Our bad times didn’t last. Our mother bought some land in the mountains in the middle of the state forest. There we lived in a house we built ourselves from river rock. Our garden was filled with fruit trees and sunflowers, asparagus and strawberries, and we were richer than anyone had a right to be.

We were about seventy-five miles from our old home that had been bulldozed, but even so everyone in this new district knew our story.

One day our mother was on her knees in the marjoram, freeing it from the grasses that were strangling it; the sun was warming her back.

She felt a slight pressure against her hip and, thinking it was one of us children, she turned sleepily with a smile. She whispered and her voice was lost in the mountain air.

“Oh, what an exquisite, beautiful cat you are, Mrs Black.”

Lin van Hek is a Melbourne writer and artist

One thought on “Mrs Black”