The Advertising Standards Bureau should really get onto the ABC about this book. The ABC has invested taxpayers’ money in publishing a book which fails to deliver what it promises. From the title, one would expect a bit of history or at least some analysis of Islam in Australia. What is found instead is a mish-mash of poorly-thought-out positions on a variety of topics.

Sami Shah (above), recently awarded a prime gig on the ABC, is a Pakistani-born comedian, writer and broadcaster. He has publicly renounced Islam, an act of apostasy which would incur the death penalty or at least imprisonment in many Muslim countries. He migrated to Australia in 2012, becoming a citizen in 2017. This book, like Shah, suffers from a split personality. It is unclear whether it is social and political commentary masquerading as stand-up comedy, or a series of one-liners trying to engage with Islamic history and theology. It seems to fail at both.

The book is not without some merit. Shah is a funny bloke and he applies his comical blowtorch to everything. He says things about Islam that no one else besides Pauline Hanson would. He states that “Islam is simply incompatible with complete freedom of speech”. He notes that the much-misquoted Koranic verse that says “if anyone kills one person it is as if he killed all mankind” is immediately followed by a verse that calls for killing, crucifying and amputating the limbs of others.

Although Shah states that “critics should be able to critique Islam and its followers without accusations of racism and Islamophobia being levelled at them”, and “I am happy to be an Islamophobe”, his refreshing honesty has its limits. He points the finger at the shortcomings of Australia’s Left and Right and their failure to speak the whole truth about Islam. But his left-wing bias shines through. While pillorying those on the Right, naming Hanson, Bernardi, Bolt and Abbott many times, he does not identify a single offender among the “secular Western liberals” of politics or the media. Those on the Left are implicitly shamed but never specifically named, so they escape scot-free with their anonymity intact. 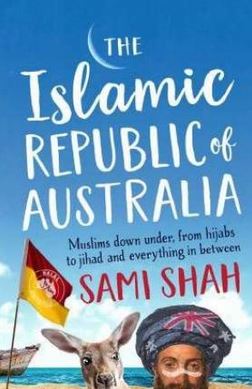 While stating that his goal is to contribute some “nuance” to the discussion on Islam in Australia, Shah acknowledges his failure to do so. He admits, “my simplistic summation ignores the immense nuances and details”, and this becomes a recurring feature in the book. He states that “everything in this book is based on anecdotal evidence”, and it shows. Dismissing the period of British rule of India as “a legacy of oppression and degradation”, he says: “And the first person to offer up a defence of ‘Yes, but they built a railway’ is going to be tied to those train tracks while I run a rusted locomotive over their heads.” Not much nuance there. He hides some intellectual laziness behind another joke: “I didn’t reach out to Cory Bernardi because even I have standards.”

Although he is careful to divide Muslims into a range of different groups according to their political predilections, he does not extend the same courtesy to others. Undifferentiated “Americans” (all of them “are crazy”) are guilty of a myriad of sins, including “dropping bombs over Iraq”. “Muslims are being bombed by America and its allies” and are “bombed to dust in Iraq, Afghanistan, Pakistan, Syria”. The clumsily stated and inaccurate victim narrative is carefully nurtured. In fact, more Muslims have been killed in those countries by other Muslims in terrorist attacks and self-imposed civil wars, but apparently Shah doesn’t consider this worth mentioning because “America” is not doing it. Similarly, there are global statements such as, “the breadth, depth and mendacity of Australian racism is continuously astonishing”—another spectacular failure of nuance. One wonders: where does the ABC’s backing of his book fit as an example of this widespread racism? There is a strong anti-white invective and a jaundiced misreading of history that sounds suspiciously like Marxist Theory 101. All the world’s problems are apparently the result of “Western imperialism” and those running-dog American capitalists.

This review appeared in a recent edition of Quadrant.
Subscribers read it weeks ago

Colonialism was, according to Shah, only notable if it was carried out by Europeans. Ottoman colonialism, which he admits was “brutal”, was longer lasting than anything from the West ever achieved but it is excused because they were “native to the region” and they “managed to yoke together Arabs, Turks, Kurds and many others, and keep the peace for six hundred years”. Really? The ghosts of millions of massacred Armenians, Assyrians and Greeks might have a different perspective. He does concede that there were some serious problems with the Ottomans, but only in a footnote.

It is his absence of perception that is most astonishing. Speaking about the treatment of Australia’s indigenous people, he says: “I still believe we are lucky there aren’t aboriginal insurgents enacting violent revenge on every single one of us.” Yet he fails to ask the question: Why are primarily Muslims involved in terrorism? What is it about Islamic teaching that causes young men and women to rush to join ISIS in Syria and Iraq? Young Buddhists don’t rush to Myanmar to fight against Karen separatists, or young Hindus to fight Muslim insurgents in Kashmir, or young Christians to Nigeria to fight Boko Haram. He is unable to look beyond his own bias.

At times he gets close to gaining some insight, but then flinches and moves away from it. He and his wife fled Pakistan for the sake of their little girl. (He admits that he would have been willing to stay in Pakistan if they had a son, despite what he calls Islam’s “grotesque misogyny”. Isn’t that sexist? Shouldn’t both boys and girls be spared from such psychological abuse?) Yet when his little girl comes home from an Australian Catholic school (where they enrolled her) speaking about Jesus (who clearly valued women and children), Shah feels the need to teach her more about Islam which, by his admission, teaches the opposite. This does not make sense.

His ingrained prejudice against Jews and Christians breaks through periodically. He writes: “I have never been to Israel but I imagine there’s a similar fanatical obsession with defining and affirming its religious identity.” Those who have been to modern secular Israel will find this proposition laughable. Of course, Pakistan and most Muslim countries will not permit their citizens to travel to Israel—despite the Koran’s much-vaunted “no compulsion in religion” verse! Now that he has an Australian passport and can travel freely, Shah needs to see Israel for himself instead of repeating Islamist anti-Semitic propaganda.

Shah makes similar attempts to paint Christianity with the same brush as Islam. He claims that “the Sunni–Shia conflict never reached the intensity of the wars between Catholics and Protestants”. Actually Sunni–Shia fighting began nearly a millennium before the Catholic–Protestant split in 1517. In 680 AD, Sunni soldiers killed Muhammad’s proto-Shia grandson at Karbala. Hussein’s severed head was placed on a tray where the victorious Sunni general played at its nose and mouth with a stick. It was then paraded through the streets of Kufa before being sent to the Caliph Yazid in Syria. Sunni–Shia hatred has continued unabated for fourteen centuries (even Shah jokingly engages in it), finding its modern incarnations in Syria and Yemen. The Iran–Iraq war of the 1980s cost more than a million Muslim lives: by comparison, the body count from Northern Ireland’s Catholic–Protestant “troubles” during the same period was less than Northern Ireland’s road-toll.

Shah claims that “everyone following an Abrahamic religion” is subscribing to “a violent, cruel, repressive and regressive belief system” whose “exit-clauses” are “life-threatening”. This is blatantly dishonest. Only Islamic countries, in the modern era, practise the death penalty for apostasy and cite their religious texts to justify violence, cruelty and repression. Shah engages in sloppy journalism.

Shah gets other facts wrong. A sword taken as evidence in an anti-terrorism raid in Sydney in 2014 is dismissed with: “Oh, and the sword turned out to be made of plastic.” This accusation was also trumpeted in that unbiased publication the Green-Left Weekly. However AFP Commissioner Andrew Colvin, addressing a Senate Estimates hearing later in 2014, said, “I can absolutely guarantee the committee it was not a plastic sword. It was a metal sword. Categorically I can say that it was a metal sword.” AFP Assistant Commissioner Neil Gaughan, speaking on the ABC’s Q&A program that same year, also affirmed it was not plastic. But Shah, a comedian writing three years later, will not let simple facts get in the way of a good one-liner.

He also claims that radical recruitment is not occurring in mosques, at least not anymore. But this is denied by so-called terrorism expert Anne Azza Aly who, on the next page, admits that it is “rogue groups within and outside the mosques”, a theory also subscribed to by Imam Afroz Ali. In fact every Muslim associated with terrorism has invariably been attending a mosque. Man Haron Monis taught at Granville mosque before embarking on the Lindt Café siege, and Farhad Jabar obtained a gun inside Parramatta mosque in order to kill unarmed police accountant Curtis Cheng. Clearly, teaching at or attending a mosque did not deter these jihadis from their grisly acts.

The best lines in the book come from Shah’s wife, Isma Alvi, a psychologist. In her description of the impact of the Koran and Islam on herself and Muslim women, she displays the clearest thinking in the whole book.

Similarly clear was Sarah Awan’s advice to young Muslims, focusing on “trying to make people feel like Australia is their home, trying to make them feel like you don’t need to be looking elsewhere to find somewhere else to fit in. You can fit in here in Australia.” Her affirmative and confident tone is much healthier than Shah’s at times sarcastic dismissal of Australia and Western civilisation. It sounds as if he has been secretly imbibing Maududi and Sayyid Qutb.

Shah’s denigrations are unlikely to make anyone want to call Australia home. It is a shame that he has so little positive to say about the system that has given Australian Muslims the opportunity to live in security, to prosper, to express themselves freely, and to enable Shah himself to rise up to public prominence in five short years. There is an almost complete absence of such hope throughout the book. This is its biggest shortcoming. Australia’s Muslims and the Australian public deserve better than Sami Shah’s ABC-sponsored mockumentary.

Dr Bernie Power is the Missiologist at the Melbourne School of Theology, and a lecturer with the Centre for the Study of Islam and Other Faiths.

The Prose Behind the Poetry

Our Age of Conflict

What Russia Chooses to Forget