It’s a pleasant muggy morning, nine o’clock, at Yokohama War Cemetery, nine kilometres west of the city. We had rain yesterday, but today has dawned blue and clear. This beautiful garden, nestled into gentle hills, was made by Australians in the aftermath of the Second World War as a resting place for our dead, and the dead of our Commonwealth Allies, British, Canadians, Indians, New Zealanders, two Rhodesians and one South African. Crows caw from the trees, melancholy, insistent and strangely homely.

I am here for the Anzac Day service with my partner, Leigh Elliott, and an old friend, Richard Andrews, who is First Secretary at our embassy in Tokyo. We stand on a gentle downward slope in the New Zealand and Canadian section. The Cross of Sacrifice, common to all Commonwealth War Graves Commission Cemeteries, is some twenty-five metres below us, and around it a crowd gathers. We are among the rows of tombstones, here of the tilted plaque variety, exactly 150 of them, each with its own mini-garden plot and message from the serviceman’s family. The garden is landscaped to encircle us in a flattened punchbowl of trees of myriad shades of green. The cherry blossoms are almost over but all around us are splashes of spring colour. Some of the trees and bushes are carefully rounded in the Japanese way, but the flowers have an English country exuberance, so giving us the benefit of two of the world’s greatest horticultural traditions. Somehow it is just right. 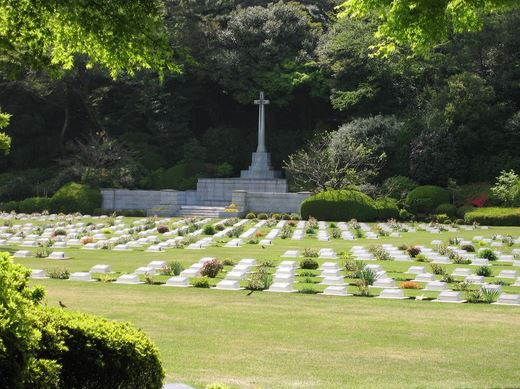 This year’s service is organised by the New Zealanders—we take it in turns with them. There are about 100 of us present, mostly Australians and New Zealanders, but also a sprinkling of British and about a dozen Japanese. It is an official occasion, with nearly everybody in dark suits or military uniforms, though there are a handful of young, casually-dressed Australian and New Zealand tourists. Besides the Anzac ambassadors, the officials include resident representatives from all of the Australian states, a counsellor from the Turkish embassy, a naval captain from the United States garrison in Japan, a Japanese colonel, and the Anzac defence attachés, the Diggers in slouch hats and Kiwis in lemon-squeezers. Like many Aussies and Kiwis, particularly when abroad, I always get a quiet surge of pride when I see those hats. They trigger stories and emotions, and I remember all the men I knew, or know of, who wore them.

The order of service is traditional, as it should be, but with a few local variations. Behind us, from the topmost corner of the plot, a diminutive Japanese naval bugler, Seaman Mamiko Nishimura, sounds the “Last Post”. Then there is a minute’s silence, and she plays a haunting “Carry On”. The calls are perfectly done (after all, wasn’t the Japanese navy, like ours, modelled on the Royal Navy?). Punctuated by the raucous but comforting crows’ calls, we sing “O God Our Help in Ages Past” to a recorded accompaniment.

Then we listen to an address from Ian Kennedy, the New Zealand ambassador. The address consists of a mandatory telling of the Gallipoli story wherein Australians and New Zealanders earned their nationhood by exhibiting their national traits of courage and mateship. After a brief reference to Second World War battles, the Ambassador then jumps to the present and remarks on how Australian and New Zealand rescue teams were among the first to help after the Fukushima tsunami and nuclear catastrophe and how just a month or two earlier Japanese government and businesses were prominent in the international relief effort after the Queensland floods and the Christchurch earthquake.

We exchange “Lest we forgets”. Our ambassador, Bruce Miller, recites Laurence Binyon’s Remembrance Ode, “They shall grow not old …” and we reply solemnly, “We will remember them”. The Turkish diplomat reads Ataturk’s reassuring message of 1934 that our boys now rest with their “dear Mehmets” safely in the bosom of “a friendly country”. This is followed by the laying of eighteen wreaths, nearly all official, and a few from the public, including three from British armed forces association branches in Japan. Up the hill beside the bugler stands a tall piper in full highland dress, Frank Hunter, who plays during the laying: the lament “Flowers in the Forest”, “Amazing Grace” and “Waltzing Matilda” among others. Then we sing “God Defend New Zealand”.

After this, we walk the short distance to the Australian section. Here Seaman Nishimura blows “The Alert”, we observe another minute’s silence, she sounds the “Carry On” and we sing “Abide with Me”. Again to the lilting bagpipes, a further twenty-one wreaths are laid, mirroring those for the New Zealand section, but now with the addition of one from each of the Australian states, and one from the Tokyo Goannas Aussie rules club. The service ends with a rousing “Reveille”.

Afterwards, it’s down the path to the main entrance, where, on a wide lawn, is pitched a marquee with tables spread with Anzac biscuits, lamingtons and sandwiches. Tea and coffee are served, or if you prefer, Coopers ale or Steinlager. I speak to the New Zealand ambassador and discover that their main export to Japan is timber; and I meet the impressive Tak Adachi, the Queensland Trade and Investment Commissioner, who though a Japanese national, was at high school and university in Australia and speaks fluent Strine. Our main exports to Japan, I learn, are coal, iron ore, beef and wool.

Investigating the cemetery further, I later discovered that there were sections for the Australians (277 burials), British (1033), Canadians and New Zealanders (137 and 13) and Indians (46), and a mixed postwar section. In addition, there was a memorial in which was interred the ashes of 335 Allied servicemen cremated by the Japanese, including some Americans and Dutch. Most of those buried were prisoners of war. In the Australian section, the earliest death was in January 1943 and the last in December 1947. The youngest had died at nineteen, the oldest at fifty-eight, and most were in their twenties and thirties.

While we eat our Anzac biscuits, Richard points out a small party of Australian military who are climbing the hill to the postwar plot to pay their respects to Warrant Officer (Second Class) Ray “Simmo” Simpson VC, who had worked in the 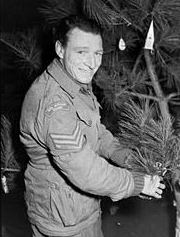 embassy as a security guard and had been a stalwart of the Hodogaya Anzac ceremony each year. Who was he? Simmo (left), it turned out when I did a bit of research, was a hard case; a Sydney orphan who had enlisted in the AIF at the tail end of the Second World War and soldiered on, with a few brief interruptions, through Korea, Malaya and Vietnam, in the infantry, commandos and Special Air Service. He won his VC in 1969 in the mountains on the Vietnam-Laos border when, leading a detachment of local Montagnards, he rescued a fellow Australian Army adviser under fire and saw his men to safety. He had already won the DCM in Korea. Unusually for a Digger, Simmo had married a Japanese wife in 1953, and lived in Tokyo after his retirement from the army, and died there, too young, of cancer aged fifty-two in 1978.

Simmo’s Australian Dictionary of Biography entry reveals him as a quintessentially Australian type. A “complex character”, he was “tough, fit, dependable, but also rude, mischievous and exasperating”, “proud, moral and compassionate”, “free of pretension”, “well-read in tactics and military history”, and his “colourful” language was “legendary”. One of us. 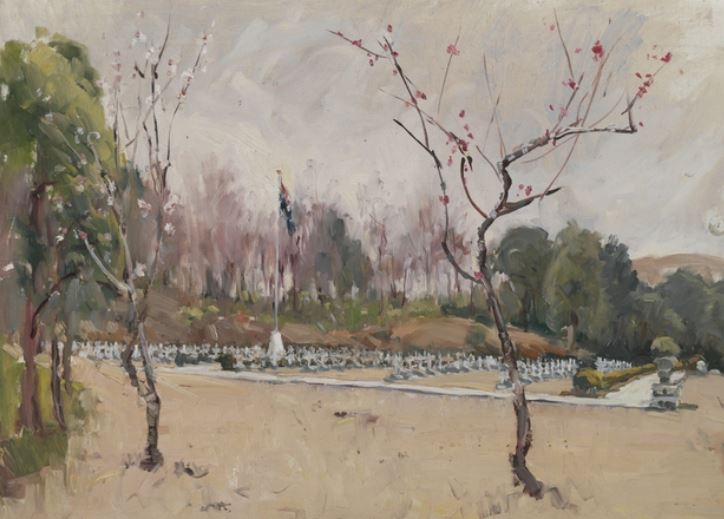 In the Australian War Memorial records, I later came across a painting by George Colville (above) of the cemetery in 1950, neat lines of graves on a bare brown hillside with a few straggling trees, and marvelled at the change to the heavenly Japanese garden that I had seen. It had been made, I found, under the direction of an Australian, Lieutenant Jack Leemon, who had been its first supervisor, from 1948 to 1952. His wife Betsy left an acute diary and memoir, which is in the War Memorial. There, too, I came across traces of a remarkable Japanese diplomat, Kawai Tatsuo.

Kawai had headed the Japanese Legation in Australia, 1941 to 1942, and there had befriended John Curtin, first as leader of the opposition then as prime minister. Together they tried vainly to avert war. He was eventually exchanged back to Tokyo in October 1942 on the Kamakura Maru, bearing with him the ashes of four of the Japanese seamen who had died in the midget submarine attack on Sydney Harbour the previous June. Arriving home, he was sacked for his advocacy of a negotiated peace. But after the war he became Vice Foreign Minister and a long-term president of the Japan-Australia Society. His son later became manager of Mitsubishi Australia.

Kawai attended the Hodogaya Anzac ceremony every year until his death in 1965. I wonder if he ever met Simmo there?

Hodogaya combines much of the best of Japan and Australia. It encompasses sacrifice and tranquillity. How fitting and how humane of the Japanese to allow us, to help us, to create such a place in the heart of their land and with us there to honour our men year on year in this earthly paradise. As the son of a 2nd AIF Digger who fought in New Guinea, I grew up with horror stories about the Japanese, and, though I have had many positive encounters since, I went to Hodogaya with an undefined sense of dread. How wrong I was. This place is life-affirming, uplifting; it contains and mediates stories of war and stories of reconciliation.

The Lost Virtue of Timelessness