The October edition of Quadrant led with a review by Claudio Veliz of the new book by Kenneth Minogue, The Servile Mind (Encounter Books, 2010). We are also leading our November edition with extracts from the same book. Such treatment is unusual but is more than justified because this is probably the most important work of political and social analysis published in our time, that is, in the two decades since the end of the Cold War. 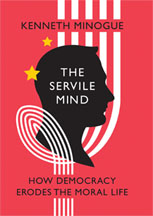 Within a scope no one else has attempted, Minogue identifies how the ruling ideas of our current political classes are predicated upon an inexorable growth of the state and the consequent loss of independence of the people. His underlying case is that we in the West are suffering a gradual but relentless process that is eroding the best of our moral and political character. Our core values of freedom and democracy are under threat from the pursuit of ideals that most of us still regard as largely benign.

The extract we are publishing deals with just one of many concepts within Minogue’s focus, that of “rights”. Elsewhere in the book he argues: “The twentieth century vogue of grandiose declarations of rights is the most influential version of the belief that there is a simple world of moral correctness to which all human beings ‘ultimately’ ought to give allegiance.” This labelling of one of the most currently cherished concepts of Western intellectuals and politicians as no more than a vogue—and grandiose at that—provides some idea of how deeply critical Minogue is of the prevailing ideological climate. Yet his case is persuasive that such a critique is long overdue in a political culture that has ingenuously accepted that those who make claims on the basis of rights are thereby entitled to them.

Minogue argues that rights were originally part of a project, of which democracy was also a part, to create a good, indeed potentially a perfect, society, on the basis of reason alone. However, the concept of rights has a democratic downside. “To codify moral and political life in terms of rights,” he says, “is to remove judgment from the competence of the demos and transfer it into the hands of governments, judges and lawyers.”

Moreover, an inherent inconsistency has emerged within the notion of rights that has further authoritarian implications. Since the Second World War, rights have expanded from a focus on rules and procedures to the granting by the state of entitlements. “Where we are concerned with rights to life, to liberty, to freedom of speech, to free assembly, and other such basic assumptions of a free society,” Minogue argues, “we find firstly that we are dealing with rules and not benefits, and secondly that these are rules responding to dispositions prevalent in free societies.” When rights expand to signify entitlements to substantial benefits, they open the door to the ceaseless advance of government management of the way we live, thereby eroding the very freedom they were originally designed to protect.

In short, The Servile Mind is a not only a book for our times. It is a profound and eloquent exposition of political and moral philosophy by a lifelong practitioner at the height of his powers.

A Plague of Optimists