The myth of a Great Betrayal by Britain during the Second World War has taken root in Australia, not just in the minds of parochial scholars, but in a hazy Anglophobia amongst the general population. Fortunately, an American scholar at Melbourne University (Augustine Meaher IV, The Road to Singapore: The Myth of British Betrayal, Australian Scholarly Publishing, 2010, 268 pages, $39.95) has stripped away the naive excuses and selective use of sources characterising what he calls Australia’s “national myth”. 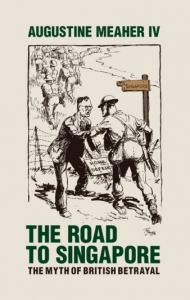 Augustine Meaher IV’s grandfather served with US forces in the South Pacific during the war. Inspired by this family history, Meaher came to Australia seeking an area of study distinct from the American parochialism of US institutions, and discovered a prime example of Australian parochialism instead. Australians can be grateful for his scholarly demolition of our local mythology.

The myth of British betrayal insinuated itself into public consciousness when the then Prime Minister, Paul Keating, needed a distraction from domestic political problems. He latched onto the idea of a republic, promoted it with rabid Anglophobia, and justified it by turning to appallingly parochial historians. David Day must be eternally grateful to Keating, who rescued him from the ignominious critical reception of his dreadful book Menzies and Churchill at War, and promoted his equally contentious The Great Betrayal to an innocent public.

Meaher starts with facts. In 1919 the First Sea Lord, Admiral Jellicoe of Jutland fame, toured the Dominions. He was specifically ordered to avoid discussion of imperial naval defence, and focus on how individual Dominion navies could be improved. But, when Australia’s Deputy Prime Minister, William Watt, asked Jellicoe to formulate an imperial strategy, he readily agreed, proposing a British Empire Pacific Fleet based at Singapore and Sydney.

Meaher’s detailed analysis shows that Australian interwar governments seemingly based their entire defence strategy on the fantasy that faraway bases (which they would not fund) could support a fleet (which they would not fund), so that Australia could pretty much ignore the need for any local defence. They pretended this even after Australia co-signed the Washington treaty making the availability of such a fleet unlikely. They lauded this Fortress Singapore, regardless of many warnings from the British government and Admiralty that, even if a fleet were available, it might not be big enough to guarantee safety, and might not arrive in time to prevent—at least—raids on Australian territory. Australian governments continued this fantasy despite the 1937 Imperial Conference where the Royal Navy revealed its perspective on the fortified Naval Base at Singapore:

Even if Japan captured Singapore, she could not absolutely rely on preventing operations in the Far East by the British Fleet [operating from Ceylon], despite the great difficulties which would be faced in such circumstances.

Meaher makes it clear that imperial defence was not a matter of “somebody else’s problem”:

The concept of a British betrayal in modern historiography rests on two fallacies: a lack of capability to respond to the Japanese attacks, and a lack of intent to carry out promises to Australia. Both are the result of selective reading of source materials.

The British had capability, given that they were fighting a global war. Britain and Australia were unfortunate that the Japanese attack on Malaya came before reinforcements en-route arrived. Three months later, the Japanese assault might have failed. Japanese Army reports on the Malayan campaign detail how marginal their victory was. Even as the Japanese invaded Burma in 1942, the Indian Army was sending most available troops to face a possible German attack from southern Russia into the Persian oilfields, lest it undermine the entire Middle East and threaten India. In the process of winning a worldwide war, Malaya and Burma were expendable. (Churchill suggested evacuating Singapore well before the surrender, which fitted British concepts of a fortified naval base. Curtin called this suggestion an “inexcusable betrayal”, because the excuse for Australia’s lack of local defence was a fortress. The British 18th division, committed as a forlorn hope, joined the Australian 8th and two Indian divisions in captivity. Who really “betrayed” those troops?)

Churchill had always stated that should Australia be genuinely threatened with invasion, the empire would abandon even the Middle East to save Australia. Many modern writers who sneer at this have apparently failed to note that in 1942 British reinforcements, including armoured divisions, headed around the Cape of Good Hope towards the Middle East were designated for diversion to Australia if invasion really threatened.

They also ignore Britain’s delivery of its promise to move the main British fleet to the Far East within six months. In April 1942 the Japanese raided the Indian Ocean, trying to defeat the British Eastern Fleet before it was fully assembled. Admiral Somerville’s force then consisted of five battleships, three aircraft carriers, seven cruises and sixteen destroyers, the biggest Allied fleet anywhere in the world. Planned reinforcements over the next two months—and within the six months the Royal Navy had originally suggested—included four battleships and two aircraft carriers. This assembly required the Royal Navy’s effective abandonment of the Mediterranean for several months (contributing to Rommel’s last advance to El Alamein). The British were hardly shirking on their promises.

Good intelligence meant that—as at Midway—Somerville’s fleet was waiting in ambush for the Japanese on April 1, 1942, but it had returned to base just as the raid actually began on April 5. Inconclusive manoeuvres over the next few days saw the Japanese advance their airpower by day, and the British advance their radar-equipped strike aircraft and battleships at night. British losses included a couple of cruisers, and the unarmed old transport aircraft carrier Hermes with its Australian destroyer escort HMAS Vampire. Japanese losses included more planes and skilled pilots than they like to admit. The British fleet retired to the western Indian Ocean to await further reinforcements, while the Japanese fleet rushed back to the Pacific to attempt to regain momentum on that front. This was Japan’s only attempt to solve their two-ocean war problem. Within months, vital elements of the tired and worn Japanese strike forces would be lost at places like the Coral Sea and Midway, and the capacity of the Japanese Navy for any sort of large-scale invasion was effectively nullified.

Meaher is not a naval historian, and does not detail these events of 1942. The crux of his argument is that Australian interwar elites—social, political, military and industrial—all failed to understand Australian and imperial defence needs in the interwar period, and thus no Australian political party made any useful effort to prepare Australia for a future crisis. Meaher suggests that Australia was too big, too geographically spread, and lacking a functional national city like London to focus these elites. Compared with Britain, Australia’s elite was small and poorly educated. The result was what the British Chief of Imperial General Staff Montgomery-Massingberd described in 1935 as “a national characteristic of self complacency”.

Meaher notes that Australia’s armed services were too busy fighting for funding amongst themselves to conceive, let alone co-ordinate, a common policy. The RAN prepared a navy to protect trade locally and to back the RN internationally, on the sensible grounds that Australia’s population was too small to be capable of “continental” defence. The Army loudly opposed this, on principle, though they had no realistic alternative strategy. The RAAF just fought to survive and, apparently, to spend more of its budget on drinks in the mess than on actual flying. (The biggest splash the RAAF made in the entire interwar period was at the grand opening of the new Parliament House in Canberra when the fly-past plane crashed.) Little of this counted against the failures of Australian governments. Meaher writes:

In 1937, 5.6 per cent of Britain’s national income was allocated to defence, whereas Australia allocated only 1 per cent. Had Australia and New Zealand spent the same percentages as the United Kingdom it would have provided more than a third of the Royal Navy’s annual budget. As the historian G.C. Peden observed: “it would be fair to say that the difference in levels between British and Dominion defence expenditure is a sufficient explanation of the strain placed on Britain by responsibility for Imperial defence”.

Meaher sees the expediency of Australia’s political elites as the real betrayal. Whereas Australia had compulsory national service, and a powerful and expanding fleet before the Great War, the entire interwar period saw one defence cutback after another. All parties acquiesced, and he notes that “conservative” governments—especially the loose coalition United Australia Party of Prime Minister Joseph Lyons (a former ALP minister and Treasurer) in the 1930s—constantly referred to the Singapore strategy as if it absolved them from the need for greater local expenditure.

Meaher points particularly to the Labor Party, which embraced the idea that Australia’s problems must be somebody else’s fault the moment Australia was threatened. (A position Keating smugly resurrected.) As it was, the short-lived Scullin ALP government slashed already minimal defence spending, and abandoned even limited urban compulsory military training in 1929. Meaher is scathing of this pretence.

Meaher also dismisses Stuart Macintyre’s argument that the ALP “in no way constrained the conservative government”. The ALP always argued against defence spending, even after Japan invaded Manchuria and later China itself, or Germany occupied Austria and Czechoslovakia. The conservatives seemed terrified to push the issue, fearing to re-inflame the pro-ALP anti-conscription sentiment of the Great War. Instead they stuck their heads in the sand and hoped, while ALP leaders like Scullin insisted that “politically, militarily, and diplomatically we shall mind our own business”. Curtin went so far as to argue against defence budget increases after the 1938 Munich crisis because “the position is less inflammable than it was two or three months ago”.

Meaher does an excellent job of analysing the fallacies of an Australian mythology, and who really betrayed the Australian people. His interpretation has a few weaknesses: as an American he struggles with the genuine emotion of imperial ties, and his lack of international and naval research limits his analysis of the actual British response to the crisis. However, the main fault of the book is that it is too short. A number of tantalising asides about the responses to Australia’s pre-war and wartime ideas by Britain’s, other Dominions’ and the United States’ governments are, unfortunately, not pursued. Nor is there much space to detail the colourful international contempt when Curtin’s government “lost it”. None of these seriously detract from Meaher’s comprehensive demolition of Australia’s parochial bad scholarship, which he sums up:

The notions of betrayal that inform popular thinking about Australia in the Second World War do nothing to assist our understanding of the past or prepare for the future, based as they are on overly simplistic interpretations.