The Towering Achievement of Les Murray

[Recent video of Les Murray reading his poetry is here…]

How is Les Murray’s new book to be ranked, among his recent collections, or in the context of his entire career? Does it matter? The answer, of course, is that the question is both irrelevant and impertinent. What does matter is the fact that a new book from Murray is a major literary event in Australia, and before so much as opening the collection, any reader must assume that the poems within it add another layer of achievement to a body of work that has long been recognised as the dominating edifice in our country’s literature, a high-rise tower at the centre of a suburb of bungalows. 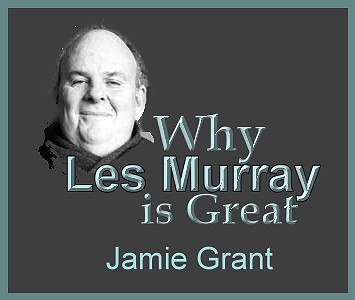 The architectural metaphor, here, is prompted not so much by the opening poem in the book, with its glimpse of the Taj Mahal, as by the fulsome reaction of Clive James, in his review published in the Monthly, to that poem; he too resorts to architecture, yet he manages to suggest that Taller When Prone is a shed, or a satellite, to an enormous building which otherwise resembles the Palace of Versailles. While he means well in making this comparison, and while he has often written perceptively about Murray’s poetry in the past, the clear implication is that this collection is a lesser structure, properly confined to a corner of the palace gardens. The very selection of a European palace as a point of comparison is, when one thinks about it, inappropriate to a discussion of the most Australian-flavoured international poet in the business; its use suggests to me that James has misunderstood the purpose of Murray’s habitual eclecticism.

The implication throughout the James review is that Murray includes pieces of arcane knowledge and information for the reason other poets, such as James himself or Peter Porter, do, which is that the knowledge itself is of intellectual significance and proof of a well-stocked mind. Yet in Murray’s case it seems to me that this is not so: he includes unusual facts for no other reason than his own interest in them. An example, in this collection, is a very short poem called “The Springfields”, which several readers, including, I suspect, Clive James, have found “hard to figure out”:

Lead drips out of
a burning farm rail.
Their Civil War.

The clue is in the title. The Springfield rifle was the main weapon used on both sides in the American Civil War; with that information, it is easy to see the first two lines as a vivid image of an early rifle, firing in the hands of a farm boy. Murray has always liked rifles, as is shown by his fine early poem “SMLE”, a somewhat longer exploration of the same subject as “The Springfields”.

The brevity of the latter poem reflects the tendency in Murray’s recent books towards what his German publisher translates as “Poems big as photographs”. It is possible to suspect his move away from composing expansive works such as “SMLE” or “The Buladelah-Taree Holiday Song Cycle” may be intended to disprove the accusation, directed at him by hostile critics, of excessive verbosity. Murray’s admirers have never wanted fewer words of him, but he has always delighted in showing that he possesses any quality he has been accused of lacking. The (relatively) recent completion of the verse novel Fredy Neptune shows that he is still capable of expansiveness.

Another reason for Murray’s recent output of poems brief enough to swallow in one gulp may conceivably be the fact that for a number of years he has been in constant demand on the poetry-reading circuit. Some well-known poets only read their most famous poems at public performances, but Murray always likes to give an audience something new. Every public reading of his work is a new experience, I have found, and one that can help to elucidate poems that when first encountered on the page may seem obscure or cryptic. Everything Murray writes has a clear and intended content, and his performances can accelerate the process of discerning that content where the solitary reader might otherwise require a dictionary or an enyclopedia’s assistance.

Yet the slighter poems in Taller When Prone can seem more like scripts for public appearances than fully realised works of art; “Fame” is the best example of this, a jeu d’esprit which goes down very well at readings:

We were at dinner in Soho
and the couple at the next table
rose to go. The woman paused to say
to me: I just wanted you to know
I have got all your cook books
and I swear by them!
I managed
to answer her: Ma’am
they’ve done you nothing but good!
which was perhaps immodest
of whoever I am.

This is charming and self-deprecating, but it contains none of the elements, such as rhythm, form, imagery or insight, that we expect to find in a major poem, and its effect is heavily dependent on Murray’s genial personal presence. It is not a major poem; yet who could fail to be delighted by it?

There are slighter poems in this book, as there are in all of Murray’s books; their purpose is to vary the tone and intensity from one page to another. The major poems, which stand out by contrast, take a variety of forms, some similar in appearance and content to the great poems of Murray’s past, and others, as is always the case with a new book of his, radical new departures. “The Conversations”, the poem that includes the phrase “taller when prone” among its haunting lines, is one such departure. At a first glance, it appears to be a variation of the “pantoum” form that became temporarily popular among Australian poets a few years ago, but its repetitions are not so regular.

As one looks more closely into this poem, however, it becomes apparent that it conceals a dramatically experimental idea beneath its tidy five-line stanzas: the idea is an inversion of the deliberately nonsensical surrealism of poets like the American John Ashbery, and his imitators, whereby instead of writing plausible-sounding, conversational sentences that turn out to have no content at all, Murray has assembled a series of seemingly surrealist phrases and sayings to reveal the numinous suggestiveness they contain, and the insight that “A fact is a small compact faith”. It is a poem of deceptive simplicity, beginning as it does with nothing more complex than a rising moon:

Though the poem roams across the world, from China to Finland, and includes such historical figures as Napoleon and the purposely misspelled Isaac Neurone, there can be no doubt that the moon is rising over Bunyah, and is the same moon that hung outside the verandah of “The Sleepout”.

One of the pleasures to be derived from any new Murray collection lies in the way the new poems can draw one back to re-examine his past work. In the process one discovers how little he has repeated himself, even when returning to the scenes of earlier poems; more than any poet I can think of, his work has always moved forward, making new discoveries and trying out new forms even at the stage of a poetic career where others have long since reverted to weary self-parody. The most impressive of the new poems in this collection, including “As Country Was Slow”, “Observing the Mute Cat”, “Eucalypts in Exile”, “The Farm Terraces”, and “Port Jackson Greaseproof Rose”, fit effortlessly into the body of his achievement, showing no sign of diminution.

Speaking strictly for myself, I became aware of the value I attach to Murray’s poetry when I entered into a discussion with him about the price of books. Les, who is always trying to think of ways to widen the audience for poetry in general, and to make it more accessible to potential readers, suggested to me that books are too expensive, and that poets may be pricing themselves out of the market. Would it not be better, he wondered, if books of poetry were available for just three dollars or so? My response was that the opposite is the case. I think he undervalues himself; there would be no price too high to pay for a new Les Murray book. If all the other poets in the country were equal in standard to Murray, they too would be good value at any price; but as things stand there are far too many not worth reading even were they to be given away.

Jamie Grant’s latest book is his selection of 100 Australian Poems You Need to Know (Hardie Grant). More of his poetry will appear shortly in Quadrant.

Anatomy of the Crime Novel