Resonance in the Natural World 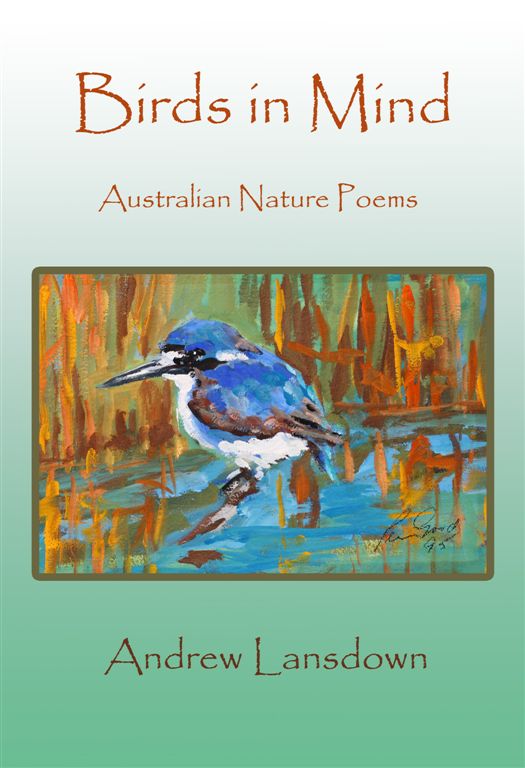 For more than thirty years, Andrew Lansdown has committed himself steadfastly to writing, with poetry a major part of his output. His many books include the popular series of children’s adventures beginning with With My Knife, and collections of essays. He has recently launched a website and has an impressive collection of literary prizes. He has, from his first work, established a distinctive and individual voice.

Birds in Mind, a very substantial collection, consists mainly of “nature” poems, of birds, fish, flowers and animals, often with a Japanese cast to them. “Lansdown spices the world with pinches of finches,” according to Les Murray. However, many of these poems have deeper resonances, such as the grim “Poised on a Premonition” and the equally grim “Blowfish”:

tickles with the tip of her knife

Gulping in the air

that’s killing it, the blowfish

raising his boot high above

“Spring, Alfred Cove” shows his mastery of longer lines in the creation of a landscape. It begins:

This wildlife sanctuary: the last wetland on the Swan

River estuary. How long will it last? Some call it

wasteland, and few notice it at all. A patch of sedge

signals in semaphore to an inattentive world.

Much of his work contains surprising little “packages” of ideas, in some ways reminiscent of the work of the late Bill Hart-Smith:

A eucalypt bud is an incarceration of strong men—

With a conical ceiling-cum-roof. Though they dislike

each other, they co-operate, set their shoulders

to the shelter’s cover. They press and push, crack

the seal that holds the ceiling to the circular wall

then shunt the roof right off. Breaking out, they

The poems cover a wide variety of subjects, from the poetically familiar (“Pelicans”) to the strange: he is one of only two poets I know of who have written poems about daddy long-legs. There is also the wonderful but ruthless life of the sea’s edge. One of the important themes is gratitude for the richness of nature, as with “Almonds”. Simple objects and images become “blessings”:

a pair of parrots have come

to the almond tree.

Give them up, the unripe fruit

And accept the birds they bring.

As well as the many small imagist poems, Birds in Mind also contains longer pieces which fully maintain the high quality of the work. This is a less overtly religious collection than some of Lansdown’s work (he has been a church pastor) but is imbued with a consciousness of the transcendent with seems to enlighten and enrich the world. A hunting hawk at sunset is “buoyed and buoyant with light”.

It fancies shimmers beneath

The world floating at its feet.

This is to some extent summed up in his poem to the tiny luminous creatures seen in the water at night when prawning:

… The path we have trawled

is gone without a trace.

But before us the river

is latent with light and grace.

I do not wish to give the impression that these poems are parochial: while some of their subjects are local, the light they cast shines much further afield. Almost all these poems show the reader new ways of perceiving the world, and should recruit new lovers of both nature and poetry—it is highly recommended for poets and naturalists old and new. He makes the countryside and suburban gardens full of wonders which have always been before us but which have largely been unrecognised. Another West Australian poet, Shane McCauley, has said correctly that Lansdown uses words with masterly precision to show things as we have not previously seen them, but as we may be tempted to see them henceforth: “Sometimes the images are so acutely accurate they have us asking, ‘Why didn’t we see that same similarity, that resonance?’”