Not that I’m a booze-hound or anything, but after reviewing the life story of Madame Cliquot, the champagne tsarina (Quadrant, May 2009), I thought it would be interesting to see what the life story of a man of hard spirits had to offer. My interest was also sparked by reading Alex de Jonge’s 1982 biography of Grigori Rasputin, whose life overlapped Smirnov’s, but who—although consuming a fair quantity of Smirnov’s product—managed to make almost no contribution to the Russian economy or the betterment of the masses. 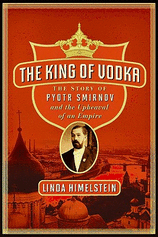 Unlike Rasputin, Pyotr Smirnov (1831–98) was a model of probity, industry and traditional virtues. His life story is fascinating, because it parallels the first great flowering of bourgeois life in Russia under Tsar Alexander II.

At the beginning of the nineteenth century, the Smirnovs were serfs, owned by rich landowners and tied to their home village of Kayurovo, 170 miles north of Moscow. In fact, they weren’t even Smirnovs then, because serfs didn’t have surnames—Pyotr seems to have acquired the family name in his twenties. In one of those delightful ironies that you just can’t make up, it is a derivative of smirnoy, meaning “quiet and law-abiding”.

The family had several things on their side, chief of which was their head, Arseniy, Pyotr’s father. This hard-headed man had big ideas and a work ethic to match, and he was also literate. Arseniy’s younger brother Grigoriy headed off to the local version of the big smoke (a town called Uglich) to break into the business world of seedy-tavern-keeping. He prospered, and Arseniy and two of his sons, including Pyotr, joined him. The Smirnov family thus acquired a foot on the lowest rung of the social ladder which Pyotr was to climb with sheer industry, prudent investment and good business sense. The family purchased its freedom and joined the working class, and at the end of the nineteenth century, Pyotr Smirnov the former serf died a multimillionaire.

Interwoven with Smirnov’s story is the battle of the Russian authorities with vodka. Throughout nineteenth-century Russia’s debating, bureaucratic dithering, autocracy and acrimony over public drunkenness and prohibition, it never seems to have occurred to anyone to ask why so many Russians were so drunk, so often. Could it have been because of the stifling of initiative, the petty bureaucracy, the clogging of the economic arteries, the constant pilfering of the state via taxes and stamp duties, and the sheer wall of opposition which could stand in a man’s way when he wanted to make a better life for himself? This is where the story of Pyotr Smirnov enthrals, because he overcame the constant obstacles, maximised his opportunities, and, importantly, never allowed a setback to reduce him to sitting on the stove all day and complaining like someone out of Chekhov.

Pyotr Smirnov chose his three wives with the same acumen. No hopeless romantic, he married up: first of all Nadezhda Yegorova, a young woman from his home district and a deacon’s daughter (socially a cut above the son of a freed serf who was involved in trade). Barely a year after her death, Smirnov chose Nataliya Tarakanova, an intelligent woman with practical family business experience, who helped him build his empire in between providing heirs. After Nataliya’s death, he married Mariya Nikolayevna, an elegant socialite who ensured that the family home was run along gracious lines, that the Smirnovs were invited to the right parties, and that their children were allowed to develop expensive tastes.

This last proved to be the Smirnov family’s undoing, in that all their children seem to have gone to the dogs as quickly as possible. The boys developed the usual rich-kid hobbies of horse-racing, womanising and gambling; the girls tended to choose fortune-hunters and cads. Practically overnight there were actresses, ropes of diamonds, illegitimate children, multiple divorces and feuding on a grand scale, only interrupted by the Russian Revolution and the loss of all Pyotr’s hard work and industry. Within twenty years of his death, his children either submitted to their new masters or joined the great Russian diaspora, scattered across Europe and making the best (or worst) of their bad lot.

Then the plot thickens. In the distant USA, go-getting émigré Rudolph P. Kunett (born Kunettchenskiy, a family who grew the grain that supplied the Smirnovs with their raw material), bought the Smirnov brand in 1933 from the moribund Vladimir, Pyotr’s son living in exile in Paris, who was absolutely skint and offering the rights to any takers. Through hard work and enterprise, Kunett and his business partner eventually managed to break into the US liquor market with their unusual product, and the rest is history.

But with the downfall of communism, the Smirnov family’s distant descendants started to talk about family honour, proving that if nothing else, they had inherited Pyotr’s shrewd eye to the main chance. Boris Smirnov, Pyotr’s great-great-grandson, argued (unsuccessfully) in and out of international courts that Vladimir had sold the rights illegally, and that the family was entitled to compensation and exclusive rights for the sale of Boris’s own version of Smirnov vodka in the Russian republic. If you want to find out how it has all ended, then read the book (hint: both brands are now owned by vast international conglomerates).

Linda Himelstein is a journalist, and her writing style is awkward and often irritating. Because Pyotr’s early life is shrouded in mystery, she has also made up quite a lot from the available evidence and from museum exhibits (located in the former Soviet Union, where history is a very flexible commodity). Her reconstruction of Pyotr’s personality as nervous and sensitive seems to me to be slightly at odds with the few anecdotes she reproduces from reliable sources—au contraire, he strikes me as a rough diamond who probably learned early on to let his wife do the talking in polite society. There are some other incongruities: Himelstein provides many startling incidences of Russian anti-Semitism but doesn’t comment on this until page 144, and she doesn’t seem to have connected Vladimir’s heirloom mandylion icon (page 295) with the icon purchased, decorated and revered by Pyotr Smirnov years earlier (page 143), showing the face of Christ on a veil—which is exactly what a mandylion is.

The title King of Vodka conjures up images of a cheery Yeltsin-esque figure, dancing about with a bottle in one hand and a cigar in the other. Yet Pyotr Smirnov was nothing of the sort: he prospered by paying careful attention to the quality of his product, not living beyond his means, and using good advertising. Smirnov lived on the premises until his business expanded, kept his finger on its pulse, worked like a Trojan, found out what charities he was expected to give to if he wanted social acceptance, went to church, and paid his workers properly. It’s not glamorous, and it’s not overnight success, but it’s a winning formula in any economy that has a whiff of oxygen in it. Smirnov’s story shows that all a government really needs to do, if it wants a thriving economy, is to remove the more obvious obstacles to prosperity and let human nature do the rest.

Dr Philippa Martyr is a Perth historian. She reviewed The Fall of the West in the April issue.

A Town in Time