Torn Apart is the thirty-fifth book from Peter Corris featuring Cliff Hardy. Older, possibly wiser, bruised and somewhat battered, Cliff has now lost his private investigator’s licence. In the previous novel, Deep Water, he suffered a heart attack. What else can go wrong?

How about being confronted by his doppelganger? “The Doppelganger” features in one of the earliest pieces of crime writing published in Australia, a story by Marcus Clarke published in the Australian Monthly Magazine in August 1867. 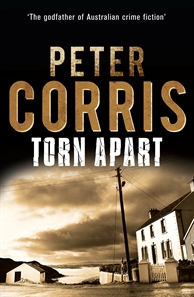 It is cheering to find tradition perpetuated, and well-worn themes refusing, like Sherlock Holmes, to lie down and die. It is part of the appeal of crime fiction, the return of the familiar. The psychiatrist Charles Rycroft theorised that the addictive nature of reading detective novels arose from an obsession with the primal scene, returning to the site of seeing your parents having sex. Though Cliff Hardy is never that much into voyeurism, prurience or weird stuff. In the ranks of contemporary criminal investigators, he remains comparatively clean cut. Not for Corris the serial post-mortems, serial killers and child abusers threatening to colonise the genre.

Even though he has lost his licence, Cliff remains the private investigator. His origin lies with Raymond Chandler’s Philip Marlowe. In a hard-to-get memoir which has now become a collector’s item, Sweet and Sour: A Diabetic Life (2000), Corris confesses to having “at first imitated him slavishly”. Such sweet slavery. Movie-makers and literary critics call it homage. Or even hommage.

There is nothing slavish about Corris now. He writes with a deceptive simplicity and clarity. He records and observes, but this is also point-of-view fiction. Isherwood’s phrase “I am a camera” captures it. The transparent narrator, whose consciousness nonetheless we share. A private eye but not a hard-boiled one. Nor is there anything of the somewhat overwritten aspect of Chandler. We are not overloaded with smart cracks, nor with their corresponding bursts into elaborate similes, lyrical and sardonic. Corris’s writing has developed into a clear, efficient medium. It doesn’t draw attention to itself. It knows the requirements of the genre. He isn’t moaning along with Ian Rankin and Robert Harris that crime writing is not taken seriously as High Art. Crime fiction is not High Art. It is entertainment, and Corris is an accomplished and compelling entertainer.

Importantly, he has done it with a private eye. In the era of wall-to-wall police procedure fiction and television, this is a relief. The original great investigators were all private citizens: Sherlock Holmes, Father Brown, Lord Peter Wimsey, Hercule Poirot. They were independent of the state. Some, like Cliff without his licence, were rank amateurs. They represented a private morality that could operate independently of bureaucratic bumbling, political interference and vested interests.

The shift to police procedure has been a worrying one. It is worse for television than for books: in order to close off the mean streets so that they can be filmed, scripts inevitably have to be submitted for approval by authority, police or governmental. It can lead to a disturbing complicity with the ever-expanding reach of big government. It can all too readily be the mouthpiece of the nanny state. But Cliff Hardy remains incorrigibly his own person.

I must confess to having ignored the earliest Cliff Hardy novels. Back in 1980, when The Dying Trade appeared, I felt that the genre was concluded. Raymond Chandler and Dashiell Hammett had done it all. Ross Macdonald had made a noble effort at revivification, but had turned the 1930s social observations into a depoliticised focus on the family and generational issues. There was nowhere further to go. I was wrong, of course. Robert B. Parker demonstrated there was life in the old formula yet. And when I finally began reading Corris, I realised the rewards were there as strong as ever.

And there was the pleasure of finding familiar settings. I used to enjoy driving along the precipitous coastal road south of Sydney because it reminded me of the settings of so many Hollywood crime movies. It is a setting Corris has used to good effect. But he is probably more closely associated with Bondi and Darlinghurst, Newtown and Glebe, where Cliff’s investigations have led him into an exploration of a unique and characteristic Sydney, in the days before we called such settings iconic. He has captured a particular ambience of both inner city and rich suburban Sydney and made it his own, a familiar, expected and welcome milieu. He has done for Sydney what Raymond Chandler and Robert Crais have done for Los Angeles, Ross Macdonald for Santa Barbara, and Robert B. Parker for Boston. It is easy to underestimate the creative skill here. Yes, those environments exist. The skill lies in evoking what is characteristic, defining, memorable, in the selection and emphasis.

As with another of the great originals, Simenon, Corris’s books are never overwritten. There is none of that endless itemisation and padding increasingly found in the longer tomes of contemporary crime fiction, tedious, obvious and make-weight. The Cliff Hardy novels, like Simenon’s police procedural Maigret series, are readable at a sitting. It is an art in danger of becoming lost, but one that Simenon cultivated. Of course, you don’t have to read the books in one go: you can savour them over two or three days if you are strong-willed.

Torn Apart is an excellent addition to the series. As well as the doppelganger, who claims to be Cliff’s cousin, there are other new features to the old mix. There is an overseas visit to a Travellers’ fair in Ireland—lots of old Micks there. But Cliff soon returns home to his usual stamping grounds. There is another Travellers’ get together in Kangaroo Valley. There is a Blackwater-like paramilitary security operation out in the bush. There is an ex-wife (the cousin’s). The personal and the political are enigmatically intertwined.

The remorseless gentrification of Glebe and Newtown proceeds apace. But not of Cliff. He remains pretty well as rough-hewn and unreconstructed as ever. Despite the depredations of criminals, police and female persons. Which is immensely reassuring.

Murder at the Savoy, One Night Only

Evelyn Waugh and the Fourth Estate