The coming of the Gipper 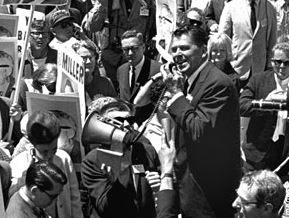 Half a century ago, in 1964 at  the Republican National Convention in San Francisco’s Cow Palace, Ronald Reagan delivered the speech that  led him, ultimately, to the White House. Here is a small part of that address:

“We have so many people who can’t see a fat man standing beside a thin one without coming to the conclusion the fat man got that way by taking advantage of the thin one. So they’re going to solve all the problems of human misery through government and government planning. Well, now, if government planning and welfare had the answer—and they’ve had almost 30 years of it—shouldn’t we expect government to read the score to us once in a while? Shouldn’t they be telling us about the decline each year in the number of people needing help?”

For the rest of Reagan’s speech, follow the link below.