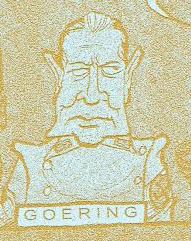 At Nuremburg they would have used a rope and a short, sharp stop to remedy Herman Goering’s inclination to consider himself a prime example of the Master Race, before which he and his kind demanded the entire rest of humanity must prostrate itself. His own solution — a cyanide capsule hidden in a jar of cold cream — saved the hangman any trouble. But that was then.

Today, as Zeg observes via the link below, the preferred cure for those imbued with bloody contempt for lesser mortals is a publicly financed course in “de-radicalisation”