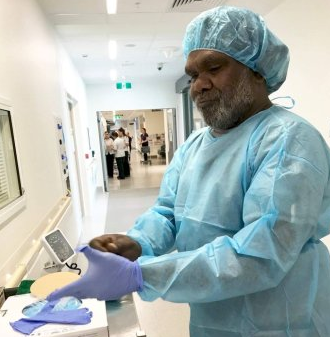 In Quadrant‘s first edition of 2012, Christopher Akehurst wrote of the CSIRO’s embrace of superstition, detailing the body’s guidelines and pay rates for the professional animists it recommended be brought in to cleanse any newly opened laboratory or office of “evil spirits”. This is achieved, as you might have guessed, with a smoking ceremony and incantations:

If the CSIRO does not believe in evil spirits, its endorsement of smoking ceremonies is cynical and insulting to Aborigines. A stronger objection is that it reinforces a patronising perception of Aborigines as quaint curios, picturesque Stone Age relics lost in their own dreamtime, a people divorced from the rest of a nation that ought to belong to everyone who lives in it.

Six years on and the influence of “Aboriginal knowledge” on science continues apace, as the ABC recently reported:

Ngangkari healers were considered the treasure of Aboriginal communities, and now their 60,000-year-old tradition has made its way to South Australia’s Royal Adelaide Hospital and rural clinics.

According to Francesca Panzironi, a former University of NSW lecturer who now heads a flying a squad of healers,

The program is, of course, backed by taxpayers, as a report to the SA Parliament notes in passing:

The Ngangkari program is supported by Country Health …  Ngangkari are Anangu traditional healers, who have received special tools and training from their grandparents.

Anangu have a culturally based view of causation and recovery from physical and mental illness and attribute many illness and emotional states to harmful elements in the Anangu spiritual world. Ngangkari are highly valued for their unique ability to protect and heal individuals and communities from this harm…

To learn more of Aboriginality’s latest advance follow this link or the one below.