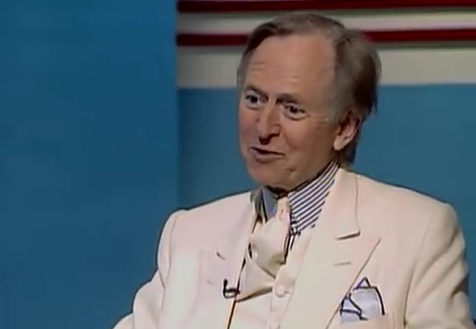 Dead at 88 of pneumonia in the Manhattan that was his home and fascination, Thomas Kennerly Wolfe Jr., was blessed by a sharp reportorial eye, a handy (if sometimes prolix) turn of phrase and, perhaps most of all, the happy accident of birth that saw him enter the world as far from Australia and its literary/artistic herd as it is possible to get. How much poorer would the world of books have been had he been born in Richmond, Victoria, rather than Richmond, Virginia? We can imagine his later days as, perhaps, an Uber driver or somesuch, for banishment from the grant-fed pantheon of taxpayer-supported, lit-fest luminaries and luvvies is the lot of those who decline to follow the bell wethers of our local bleating flock.

Suppose, just as an exercise in imagination, Wolfe’s scathing return of fire at fellow writers John Irving, Norman Mailer and John Updike had been delivered with Strine vowels, rather than the vestigal cadences of a voice raised and broke in Dixie. Transliterate — pardon the pun — that trio of critics, what Wolfe described as My Three Stooges, and you might substitute, say, Kate Grenville, Arnold Zable and Thomas Keneally. Actually, there is an entire groaning smorgasbord of possibilities, as the Australia Council’s list of its disbursements demonstrates. Throw a dart at any year’s list of honoured recipients and it’s a near certainty it will strike the dangling feet of an author whose themes and prose vanish up his or her own fundament with the instinct of a bunny for its bolt hole. That’s the way it works in Australia, where talent is confirmed by conforming, as a genuine literary talent, James McCann observed in his recent Quadrant report on the keyboard ticklers swanning for each other’s admiration at the Melbourne Writers Festival.

In the US it is different. When Wolfe set about the New Yorker ‘s revered eminences in his essay Little Mummies, he could get away with such an assault on a tug-your-forelock institution because the unsubsidised world of American publishing allowed a genius editor like Clay Felker, founder of New York magazine, to thrive on the strength of the reading public’s appreciation of his weekly wares, Wolfe being one of them. Decades later, The New Yorker has still not forgiven the man who took it to task with such acerbic gusto.

Here, well things are different — a tight and incestuous literary priesthood, if you will, of the mutually ordained. Rather than publishers taking their cues from the market, they take them from the grant-givers. Indeed, those who do well in the market are spurned on the basis of an ambient conviction that any best-selling book must surely be, by definition, a work of popular and therefore dismissable vulgarity. Charles Dickens would have been out of luck, next cab off the Uber rank.

By local reckoning real authors write for other real authors. Thus do we get historical confections such as Kate Grenville’s The Secret River, which sticks doggedly to the approved dogma of black purity and white culpability. As Dr Jenny Stewart wrote in Quadrant, in fictionalising her guilt-edged “history” of the Hawkesbury, its settlers and Aborigines, Ms Grenville abandoned the fecund field of fact for victimology’s approved liturgy, thereby throwing away a much better and far more illuminating story of a not-quite-so-secret river’s personalities and events.

Ancient history, that, but what might an Australian Tom Wolfe have made from contemporary Australia’s white/black relations? We can assume he would produce a novel based on actual reporting, always Wolfe’s shtick, of the drunken, violent, child-abusing wretchedness of life in the long grass. There would be pen sketches of the enablers and excuse-makers whose pieties play no small part in keeping the victims of their cliched compassion forever on the outskirts of a white society we are tirelessly told can never entirely shed its inherited guilt. And, of course, Wolfe would play merry hell with careerists who do very well indeed by preaching from the state-subsidised pulpits of unimpeached, but far from unimpeachable, virtue. Make the acquaintance of the race-huckstering Reverend Bacon in Bonfire of the Vanities and you will get the idea what he might have done with any number of feted and fawned-upon Q&A guests.

But just try pitching the above synopsis to any large Australian publisher hooked into the grant mill, as all the major houses are. The reason for immediate rejection would go something like this: “You’ll never get a grant to write that sort of book and we won’t give you an advance. The book review editors will hate it. You won’t be invited to a writers’ festival or the First Tuesday Book Club. And finally, we’ll never get an Australia Council handout to promote it.” It’s a good lurk being a mainstream Australian publisher: the government pays your authors and your advertising bills.

Wolfe’s argument that fiction born of observation and realism trounces in terms of merit and value the neurasthenic navel-gazing of the anointed was laid out some years ago in the course of an extended conversation with William F. Buckley. It can be viewed via this link or the one below. What a pity both men are lost to us.