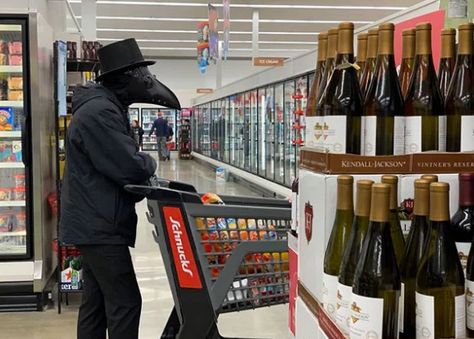 Friend of Quadrant Christopher Carr has had his COVID jabs and wonders why, having done officialdom’s bidding, he is no better off. He writes:

So yet again in this ongoing COVID saga the goal posts have moved. We now read that Scott Morrison hopes Australians will be able to travel overseas by Christmas next year, dampening former expectations the nation’s international border would be open six-or-so months earlier.

This only serves to underline not only the administrative shambles of the vaccine rollout but the absence of any clear roadmap back to normal life, pre-COVID. It is a further damaging disincentive to get the jab as soon as possible.

Apparently, both federal and state governments are only left with episodic fear campaigns to induce the average punter to get vaccinated. Get the jab or risk a horrible death! With the number of infections so small, and not even one patient currently in ICU in all of Australia, I suspect many are getting the jab to get out of jail, rather than from fear of the virus itself.

In case of any misunderstanding, I encourage everyone to get the jab. I have already had my second dose, so I am fully vaccinated. My wife will get her second AstraZeneca jab in July. You are far more likely to die in a car accident than suffer the much feared blood clots as a result of the vaccine.

But the problem is that my fully vaccinated status will make not one iota of difference for, quite likely, the next 18 months. Does getting vaccinated make any difference — grant any immunity, if you will — from lockdowns, border closures and suffocating in your exhaled CO2 while wearing a compulsory mask? Nope!

Despite her urging one and all to get vaccinated, Dr Jeannette Young, Queensland’s chief medical officer and soon to be it’s governor, does not appear to believe in the efficacy of inoculating. How else to explain her refusal to (1) allow a fully vaccinated couple from Qatar to see their newborn baby in hospital and (2) refuse to allow a husband and wife, both fully vaccinated, from the United States, to see his dying father. Some have called Dr Young heartless and cruel. By the appraisal of some a better explanation is that she is officiously stupid.

I notice that the federal government website has sought, in part, to attribute vaccine hesitancy to a belief in some outlandish conspiracy theories. I would suggest that with such a small statistical chance of infection, let alone, serious illness, a great many more will say, ‘why bother?’ when international border openings are so far into the future. My answer, get vaccinated and pile on the pressure, both on federal and state governments, to get our freedoms back.

UPDATE: I had not fully realised how just far the goal posts had been moved until NSW was plunged into lockdown on June 25. Last year, when, to quote a famous aphorism of Donald Rumsfeld, we were dealing with “an unknown unknown”, the policy objective of the Berejiklian government was to “flatten the curve” so as not to overwhelm the health system. It was a sensible aim at a time when footage out of China showed people dropping dead on the street and pop-up hospitals being erected by the day.  Many of 2020’s lockdown measures were excessive and silly, but until now, in stark contrast to the other states and territories, NSW had never espoused virus elimination as either possible or a goal.

Now all has changed. Chief Health Officer Dr Kerry Chant and her cohort of public health officials have seemingly battered the Berejiklian government into submission, with zero community transmission of the virus the object.

New South Wales has now joined with Australia’s other hermit kingdoms. Implicitly, we are promised endless lockdowns, to which end the we must be cowed into servile obedience for the good of our health. It seems citizens cannot be trusted to exercise voluntary common sense. The infantilization of the people is the most disturbing aspect of this sorry saga. It threatens to destroy the linchpin of our liberal democracy.

As for the fully vaccinated, Dr Chant has bad news for you: you can still ‘get it’ and ‘spread it’. How naïve must we have been in believing that getting the jab would be a passport to freedom. Inoculated or not, you must wear your mask indoors, breathing in exhaled CO2, fogging up your glasses. You will obey!

Some will ask how many of the “cases” are really sick? This lese majeste is pure insolence. How dare they even ask!

In a class of their own