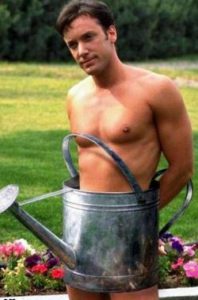 Christmas has come and gone, all the many rich and diverse celebrations of the day proceeding without a single bomb or nasty public word. The Queen and our Prime Minister each endorsed charity and goodwill, many ate far too much and family life, for many, re-assembled itself for a day-long reunion with knife and fork in hand. For most, that is. In the pages of the Fairfax press, novelist Christos Tsiolkas was pondering in no few words the absence of his desire to raise children. They are time-consuming, it seems, and detract from higher pursuits. As Tsioklas writes

My partner, Wayne, has always been clear that he didn’t desire children. Like many of us, he is hungry for more time, and when he gets it, he works on the garden.

You’ll never have to endure a high school production of Iolanthe when your sole progeny is a turnip.

Tsioklas’s The Slap sold well and became, inevitably, an ABC series that introduced the broader Australia to life and anguish in the recently fashionable suburbs of Melbourne. It is a sharply accurate portrayal which perhaps explains why there is not one sympathetic character in the entire novel. They have a way of conducting themselves, you see, the members of this almost-inner-city class of which Tsioklas is both observer and member. It’s a certain bluntness, as when describing his reaction to a sentiment mysteriously common among parents (emphasis added)

…a friend would offer that being a mother was her greatest achievement or another friend would state that his being a father had finally given meaning to his life, and I had to check the unworthy feelings of envy and jealousy that crept up on me. These emotions rushed through me, overwhelmed me, and I had to choke back the urge to retort:

“You just had a f— and got pregnant, what great achievement is that?” Or to repress a poisonous schadenfreude, if, on becoming teenagers, their children had started acting up and were now disappointing them.

Tsioklas can be observed at length, at great length, casting his seed upon the ground via the link below.