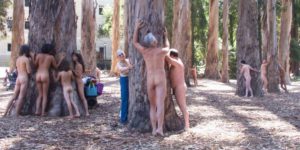 Sometimes, every so often, the widespread incidence of vocal idiocy can be quite heartening, especially for sentient Australians who have endured years of hectoring by deep-green nitwits. One of the chief contributing factors to the Black Saturday bushfires of 2009 in Victoria was the refusal of Greens-influenced local councils and land-care authorities to initiate the prophylactic burning needed to reduce fuel loads and manage fire risk.  It was much the same story a few years later in Tasmania, where the flames ran wild once again.

Surely these people were Australia’s particular curse, it was tempting to conclude, as there could be few, even in less flammable lands, who would find the direct relationship between lethal fires and abundant ground fuel just a bit too hard to grasp?

Well, thanks to a group of Californian activists — that’s them above, naked and cuddly with a stand of Berkeley blue gums — we now know that American fools are at least the equal of our own homegrown variety. Those trees are supposed to come down to reduce the fire risk, and there is good reason for the felling and lopping: Twenty-four years ago, wildfires feeding on the eucalypts’ oil-rich leaves and uncleared ground fuel destroyed some 3,300 homes and claimed 25 lives.

But a tree is a tree is a tree, to your typical green ratbag, and human life not worth much at all, so Berkeley has been witnessing protests aimed at preserving the surrounding terrain as a pyre in need  only of its spark. This puts the Californian crazies on a par with their Australian counterparts — but then they go further. According to protest organiser and photographer Jack Gescheidt, whose grasp of forestry leaves quite a lot to be desired, “native vegetation” absolutists have been spreading “the myth” that eucalypts love to burn. He explains:

“…. all living trees, because of their high moisture content, are considered resistant to fire …”

It is almost a pity Gescheidt wasn’t communing with nature in Kinglake on Black Saturday, February 7, 2009. He might first have noticed that some species are indeed quite fond of going up in flames. Further, like the 173 victims that inferno, he might no longer be around to orchestrate a repeat performance of that holocaust on the other side of the Pacific.

It would beyond Gescheidt’s comprehension, but those interested in learning more of trees, fire and the fatal romanticism of the deep green mind should read forester and fire expert Roger Underwood’s essay via the link below.

Our agile and innovative artistes