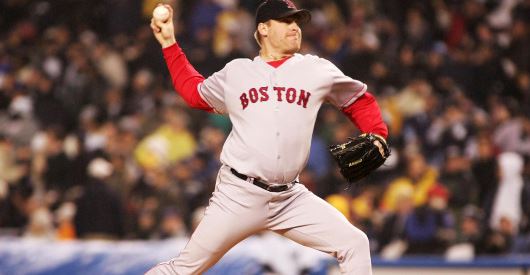 Baseball, a great game and very nearly the equal of cricket, remains a relatively minor code in Australia, so few would be familiar with retired pitcher Curtis Montague Schilling. That is him above, with the Boston Red Sox in the dying light of his heyday, after which he embraced the career of an articulate and insightful sportscaster — an occupation now brought to a premature end by the ESPN cable-sports network. His crime: sharing a social media post that showed, as the New York Times describes it

an overweight man wearing a wig and women’s clothing with parts of the T-shirt cut out to expose his breasts. It says: “LET HIM IN! to the restroom with your daughter or else you’re a narrow-minded, judgmental, unloving racist bigot who needs to die.”

In baseball, they have several terms for the pitches used to intimidate batters. A brush-back is a ball that whizzes past the face, while the openly warlike beanball is meant to lay him flat on the ground.

Schilling, like so many who utter opinions and observations that others wish to silence, has just been beanballed. That he is a conservative had everything to do with it.

As PJ Media’s Stephen Kruiser notes at the link below, ESPN swears it is an “inclusive” company — inclusive, that is, for those who would exclude those with whom they disagree.