A time for truth 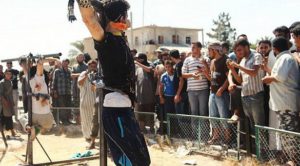 All cultures are equal, don’t you know?

I do not want my children to be Eloi.

I have not been surprised or shocked by another massacre perpetrated by Muslim terrorists in Paris. Sickened, disgusted and angered, but not surprised. I do not share “the deep shock” professed by Frau Merkel, Mr.Cameron and Messr. Hollande.  This trio of  Western leaders has created the right atmosphere and  conditions for the European  jihadis to thrive.

Butchery is what jihadis do, it  is their nature. They destroy, they maim and they kill.  All in the name of  the creed our leaders persist against all evidence in hailing as “the Religion of Peace”. In a sanctimonious rage against their own inability to function in the 21st century, these losers adopted the two most effective weapons of mass destruction: Islam  and the Kalashnikov.  The new barbarians appear suddenly from their underground, like the Morlocks of H.G. Wells’ Time Machine, to kill their Eloi prey — and then they disappear until the next time.

Why should Western leaders feel genuine shock and dismay? They are intelligent people, and they have long known that the real-world translation of the nostrums they sprout amount to “acquiescence”, “prostration” and “appeasement”. They knew as much for years yet dared not deviate from the pablum of their favoured dogma. It is their silence, their craven silence, that has brought on the Paris attacks and so many other similar calamities. Simply put, they found murder and mayhem preferable to facing a thorny truth.

What do we do in response? After Paris, as usual, we maintained a solemn, dignified silence for one whole minute. Wow! We expressed outrage and disgust. Double-wow! We bathe our landmarks in tricolours and put the flowers on the pavement where innocents were slain. Triple-wow!!! Then we feel good about ourselves.  After that, everything goes back to the way it has been — until it is time for the next batch of meek Eloi to suffer the same fate as all those who have been consumed before them.

Sporting our easy, undemanding faux dignity, we endlessly repeat the mantra that the absolute majority of Muslims is peaceful and does not condone killing of innocents in the name of Allah. We nod our collective heads in apparent agreement and take great care not to offend our Muslim neighbours, who seem strangely mute in denouncing their fulminating co-religionists. But not to worry! Multiculturalism is the way to go, don’t you know. Haven’t our leaders told us as much over and over again?

Yet the fear is slowly seeping out and soaking in, and as the politicians prattle we look over our  shoulders.: When will the next attack come? Is it our turn next — our nation, our city, our family, those we love?

Remember the Charlie Hebdo massacre? Remember how Hollande posed himself so strong and statesmanlike at  the head of the throng protesting the murderous assault, which made its target not merely a magazine’s office and staff but freedom of speech itself? It appears that was all he did — lead a parade, pose for pictures and sprout his hollow pieties.  Need we be reminded that he won office in part with the strong support of his nation’s Muslims? Some 2000 of those same French Muslims went off to fight in Syria, and they left the nation Hollande leads without being impeded.  You will forgive me for not believing Mr.Hollande when he promises “pitiless vengeance” for last week’s outrage.

Why are we losing our freedoms to unshaven and unemployed clients of the Western social-security offices? How is it that heirs of the victors of battles at Tours, Lepanto, Vienna and the other locations where Muslim invaders were sent packing now drape themselves in the white flag?

The answer is simple and the jihadis know it: our West is weak and can be subjugated.  Our civilization’s institutionalised self-loathing is the reason for the Islamist proliferation. While the West was strong, when it believed in itself and saw its heritage as worth defending, Islam was kept at bay, left to rot to the detriment of none but itself in the stagnant pool of its own diseased culture.

Regardless of what our leaders are telling us — and they will say anything, parrot any lie, if it deflects responsibility for their own actions — we are at war with radical Islam. Hybrid war, to be sure, but war nevertheless. The bringing down of the Russian plane over Sinai and Paris slaughters are the bitter rewards for the meek and mild half-measures the West has deployed, sort of, against the enemy.  If we lack the very will to win, we must surely lose.

As they mopped up the blood in Paris, laid their flowers and sang their odes to peace, terrorist leaders re-sent the same message they have been broadcasting tirelessly since 9/11. We’re coming for you, they say, and we won’t be stopped.

That is, of course, unless we find the courage and conviction to stop them.

I won’t let my children to be amongst the next batch of Eloi dragged into the Islamists’ darkness. How do you feel about your kids?

Read “Slaughter by Koranic Command” via the link below