‘They all abandoned
professional integrity’ 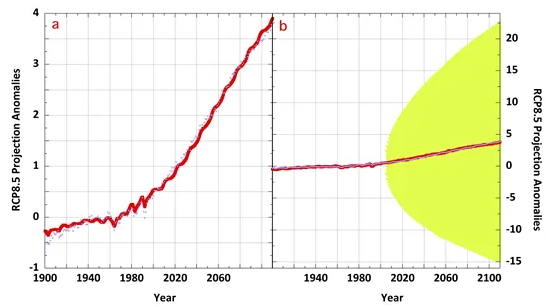 At WUWT, Stanford University’s Pat Frank details the long road to publication of his paper ‘Propagation of Error and the Reliability of Global Air Temperature Projections’ which argues, to make a long paper short, that warmist climate modellers are more notable for the arrogance of their assertive ignorance than accuracy:

In their hands, climate modeling has become a kind of subjectivist narrative, in the manner of the critical theory pseudo-scholarship that has so disfigured the academic Humanities and Sociology Departments, and that has actively promoted so much social strife. Call it Critical Global Warming Theory. Subjectivist narratives assume what should be proved (CO₂ emissions equate directly to sensible heat), their assumptions have the weight of evidence (CO₂ and temperature, see?), and every study is confirmatory (it’s worse than we thought).

Subjectivist narratives and academic critical theories are prejudicial constructs. They are in opposition to science and reason. Over the last 31 years, climate modeling has attained that state, with its descent into unquestioned assumptions and circular self-confirmations…

… From the American Physical Society right through to the American Meteorological Association, they all abandoned their professional integrity, and with it their responsibility to defend and practice hard-minded science. Willful neglect? Who knows. Betrayal of science? Absolutely for sure.

The institutional betrayal could not be worse; worse than Lysenkoism because there was no Stalin to hold a gun to their heads. They all volunteered.

If only Dr Blake were gay