Their ABC, most trusted to get it wrong 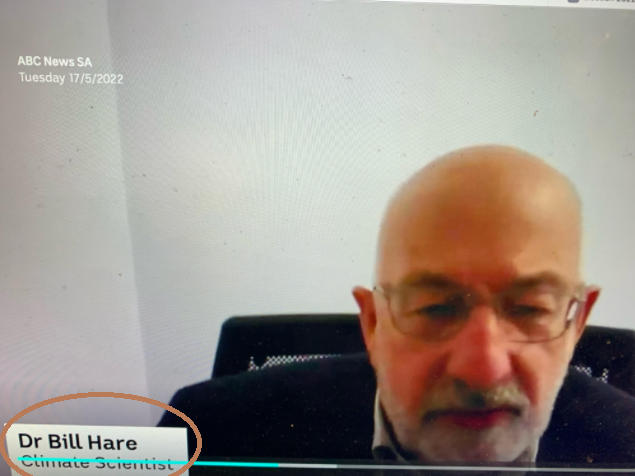 For more than a decade the ABC tribe has been bestowing a doctorate on Bill Hare, we assume to big-up his climate analytics credentials. After multiple complaints from Quadrant, the ABC’s complaints czarina Kirstin McLiesh, Four Corners ex-producer Sally Neighbour and ABC News management honcho Matt Galvin all assured us they’d stop calling him “Dr”. After all, he has only a two-a-penny Honorary Doctorate of Science from Murdoch in 2008 for being “the best climate lobbyist in the world”.

Despite those assurances, the ABC practice continued. We lodged a further complaint to Ms McLiesh a month ago but haven’t heard back yet. Shake a leg, there.

Meanwhile, on June 9, ABC News online ran a further piece, a teaser for that night’s 7.30 report,  with “Dr Hare” spruiking against Woodside’s Scarborough gas project – as if gas is a bad thing. The ABC artfully illustrated it with footage of an electricity plant belching black smoke rather than harmless steam.

Reporter Ms Shine writes, “Dr Hare said the project presented a challenge for the new Labor government, which had committed to reducing Australia’s emissions by 43 per cent by 2030. “The Labor government is going to struggle to meet the 43 per cent target as long as these kinds of projects are going ahead,” Dr Hare said.

Ms Shine is in gullible company on “Dr” Hare with, among others, Kerry O’Brien, Laura Tingle, Stephanie March (Four Corners), the ABC’s climate “expert” Michael Slezak, Sally Sara and, last but not least, Leigh Sales. We tuned in to Leigh’s 7.30 on June 9 and noticed that Hare’s ABC placard now calls him just “Bill Hare”. Oh, the humiliation for Bill, who only last year was awarded a Nobel Prize by WA Museum Boola Bardip’s website (see here).

We’re now lodging another complaint to the ABC. We never give up. Sadly, neither does Their ABC.