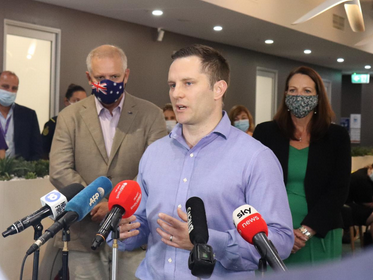 My son, who lives in New York and covers sport for a US free-to-air television network, called the other day with a simple question: ‘What the hell sort of madness is raging over there?’

He was speaking, of course, about the Djokovic debacle, also wondering if Australians realise ‘how you are now global laughingstocks’?

Ned is a dual citizen and has spent large slices of his 32 years visiting, living and working in Australia, so he can appreciate the land of his father through both a local’s eye and an international one, courtesy of his American mum. As someone with one foot on either side of the Pacific he is aware of the cultural differences, especially the Australian trait, perhaps exceeded only by the Germans of stereotype and history, to do as authority demands.

Americans, he notes, have never and would never surrender so many traditional liberties to chief health officers and politicians with their minds on focus groups, polls and the ‘experts’ who have so often proven to be anything but and whose advice relieves those same politicians at state and federal levels of the obligation to, you know, actually lead.

The latest news will only confirm the impression that Australia deserves to be the object of the world’s derisive mirth. It comes from court filings that include an email detailing Immigration Minister Alex Hawke’s (above) reasons for seeking to protect Australians from what the Morrison Government perceives to be Djokovic’s malign influence (emphasis added) on lumpen Australians:

“I have given consideration to the fact that Mr Djokovic is a high profile unvaccinated individual who has indicated publicly that he is opposed to becoming vaccinated against COVID-19,” Mr Hawke writes.

“In addition, I consider that Mr Djokovic’s ongoing presence in Australia may lead to an increase in anti-vaccination sentiment generated in the Australian community, potentially leading to an increase in civil unrest of the kind previously experienced in Australia with rallies and protests which may themselves be a source of community transmission.”

As to the actual threat to public health posed by an uninfected individual who happens to be in superb physical condition and can be assumed to have a degree of immunity as a result of a recent COVID infection, Minister Hawke has the good grace to concede it is below negligble.

But the real infection — the mere possibility that Australians might dare to question officialdom’s COVID policies — well that is the genuine peril as far as Mr Hawke is concerned.

Who knows where it might lead if Djokovic were to be permitted the right to knock balls about Rod Laver Arena? By Mr Hawke’s account, there might be an upswelling of resentment at two years lost to contradictory policies, hollow assurances, closed-border chaos, curfews, lockdowns, fines, false promises, closed schools, shuttered businesses, ruined lives and, especially in Victoria, unrestrained and officially encouraged police thuggery.

And what politician wants all that and worse on voters’ minds when heading towards an election?