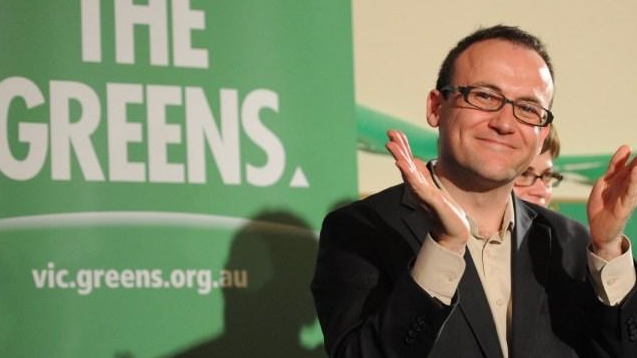 Sympathy for those who are suffering, not to mention good manners, will generally stay the tongues of those whose private thought is ‘Serves you right’. But not if you are a Green, as product of the inner-city Adam Bandt demonstrated yesterday when he popped out from behind the Goatcheese Curtain to announce that the present government’s alleged refusal to acknowledge and combat climate change is tinder for the fires raging in NSW and southern Queensland.

There are two lessons to be drawn from his verdant spite, the first of which might instruct Scott Morrison, who has just handed a billion taxpayer dollars to the rent-seekers’ renewables racket.

Prime Minister, you need to wise up. Such demonstrations will win no favour with likes of Bandt and his fellow Brunswick Street bushmen, so you might just as well come right out and say what you undoubtedly think in private: that anthropgenic global warming is tosh. That way you’ll stand for something, which is what elected leaders are supposed to do, rather than remaining a target despite doing exactly and expensively what your critics demand. They’ll never love you and they’ll never vote for you, no matter how much cash you dole out to their mates.

The second lesson is about the media’s culpability and is found in a cobwebbed opinion piece from the Sydney Morning Herald which takes a dim view of hazard reduction as a means to avoid the sort of ground-fuel driven infernos that have so far destroyed at least three lives and some 200 homes. Here’s how it begins (emphasis added):

It’s spring, and soon we’ll start to get sensationalist stories predicting a horrendous bushfire season ahead. They will carry attacks on agencies for not doing enough to reduce fuel loads in forests close to homes, for unless those living on the urban fringe see their skies filled with smoke in winter they panic about losing their homes in January.

Fighting fires with fear is a depressing annual event and easy sport on slow news days. Usually the debate fails to ask two crucial questions: does hazard reduction really do anything to save homes, and what’s the cost to native plants and animals caught in burn-offs? …

… Much hazard reduction is performed to create a false sense of security rather than to reduce fire risks, and the effect on wildlife is virtually unknown.

The sooner we acknowledge this the sooner we can get on with the job of working out whether there is anything we can do to manage fires better. We need to know whether hazard reduction can be done without sending our wildlife down a path of firestick extinctions….

That article was published on September 8, 2008, when the SMH was well on its way to the journalistic nadir it today plumbs with every fresh edition.

Five months later, 173 innocent souls perished in the Black Saturday fires, most of the casualties being residents of the urban-bush interface on the outskirts of Melbourne, where local councils not only ignored fire experts’ repeated warnings of looming disaster but actively encouraged it. In Nillumbik Shire, for example, the council urged locals, many of whom would soon be dead, to plant ti tree by their homes.

CFA volunteers have a nickname for that plant — petrol bush.

Fortunately for Adam Bandt, overgrown and drought-dried forests are thin on the ground in Fitzroy.