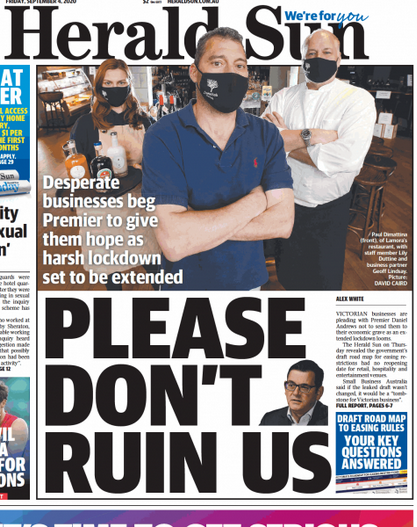 When this morning’s edition of the Herald Sun landed on Melbourne doorsteps, the front-page (reproduced in part above) report began thus:

Victorian businesses are pleading with Premier Daniel Andrews not to send them to their economic grave as an extended lockdown looms.

Inside the same edition of the Herald Sun, on page 17, there is another story, this one detailing the ongoing travails of Richmond residents who have been forced by the Andrews government’s social engineers to live cheek by jowl with a ‘harm minimisation’ heroin injecting room, the drug dealers who have made surrounding streets a junkies’ bazaar and a permanent population of drug-addicted public nuisances. That story reports:

On Thursday, a man and a woman were seen openly injecting heroin in Abbotsford, about 500m from the facility.

The woman appeared to be behaving erratically, including throwing a screwdriver at parked cars.

No mention is made if the couple were arrested, but this being Daniel Andrews’ Victoria, where 10,000 of the Premier’s political allies can violate the law with impugnity while others have their doors stove in, that they were taken into custody remains a most dubious assumption.

In Victoria as a general rule productive people are hounded and harassed, many of their businesses now in bankruptcy or facing it. Certain varieties of criminals, on the other hand, can expect kid-glove treatment.

One can only wonder if Premier Andrews feels a special affinity with those for whom the law is to be ignored when inconvenient. 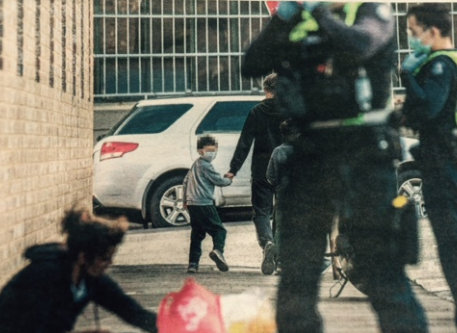 UPDATE: Worth noting is the poor little kid being led away from the sordid scene. Is he the junkie mum’s child? Is he being taken into care? We’re not told by the Herald Sun. If the latter is the case, Mr Andrews will have reason to add a few more unionised social workers to the state’s payroll. And down the road a few years? Well it’s no wonder Andrews & Co., are keen to open another smack shop near the Victoria Market.

There’s a rising generation of future burdens on the public purse to accommodate.

How to deflate an airhead