Fresh from preparing the updated and expanded second edition of Bitter Harvest for the printer, Peter O’Brien mulls the ongoing debacle that is Victoria under Daniel Andrews:

I hope it’s not just me who finds it infuriating that people keep talking about Victoria’s ‘second wave’.  The state did not have a second wave, a term which used correctly refers to a resurgence of the virus once first-response restrictions are eased and normal life resumes.

A second wave starts with community transmission from previously undetected cases.  Andrews and his cabinet of memory-damaged spivs, scolds and simpletons comprehensively mismanaged the first wave by letting the virus escape from a known at-risk group – people who were part of the first wave.

A semantic point?  Possibly, but Andrews has based his whole defence on semantics.  In PR terms (Andrews’ KPI), managing a ‘second wave’ – however incompetently – reads far better than presiding over the extension the first one.

In his Friday press conference, Andrews referred to the second-wave outbreaks in Europe and their dreadful potential, going into the northern winter, to reap the sort of havoc that would see Victoria’s deaths pale into insignificance.  His fig-leaf defence, crafted with a view to posterity and the next election two interminable years of his governance hence, will be that a second wave was inevitable and his measures contained it much more effectively than European governments are now managing theirs.  The effectiveness of this strategy depends on the Coate Inquiry faithfully delivering the anticipated result and confirming the nonsensical ‘creeping assumption’ supposition that multi-million dollar decisions and contracts are made and awarded by no one in particular. Like maggots in a rubbish bin, one day they just there.

Thanks to Peta Credlin that might not go as smoothly as he would like — do watch the video embedded above and, when done, wonder how journalism and journalists became so selectively incurious.

Clearly, many of his constituents, and many commentators, have bought so far into his spin that they have nowhere else to go. Consider The Age, for example, which this week canned a Leunig cartoon (reproduced below) that reflected badly on the Premier and the catastrophic damage he has wrought.

Let’s not let him get away with it. 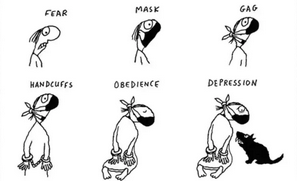