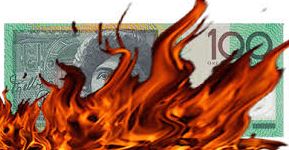 In South Australia, Victoria, New South Wales and, most recently, in Western Australia, bushfires have once again shadowed the Australian summer beneath billows of smoke and embers. Lives have been lost, entire towns destroyed and, as is so often the case with the modern academy, barrows are being pushed. Consider the insight, as quoted in today’s Age, from Monash University’s Paul Read, who is making a career out of the study of arsonists. The ignorant layman might think bushfires are growing more costly and dangerous because, regardless of what starts them, green policies have crimped preventive burning programs and guaranteed massive fuel loads. Read points in an entirely different direction (emphasis added):

“To eliminate arson we would have to completely change the structure of society, including the tax system, public transport, and core notions of social equity.”

A mis-quotation, surely? How would tampering with marginal rates or building light-rail systems make forests less likely to go up in flames? While the Age story makes none of that clear, there can be no doubt Read is serious. Here he is, via the Science Media Centre, expanding on the theme that social inequality makes the bush burn:

“…what is happening is that the socioeconomic conditions that encourage arson are getting much worse too. My sense is that growing economic inequities, particularly intergenerational inequity, youth unemployment, what you might call ‘waithood’, rising family violence and the ice epidemic, by more greatly affecting areas on the urban fringes where fires are lit, end up being superimposed over a changing and increasingly unpredictable climate.

There is more the government can do at a social level to prevent bushfires, not just clean up after them, but this is not yet fully appreciated, despite an annual cost to Australians that would make a stockbroker sweat tears of blood, much less the tragic human cost.”

Read’s emphasis on arson and the societal changes he insists are needed to inhibit it is intriguing, given that arson accounts for only a small percentage of fires. As the Age‘s sister publication, the SMH reported, (emphasis added)

“The NSW Rural Fire Service’s figures show there were 6381 bush, scrub and grass fires between July last year and January 21 this year, including 4756 which were the result of human activity.

Of those, 2804 were investigated and 209 were classed as arson. Lightning strikes caused 546 bushfires.”

So, less than 10% of bushfires are the work of arsonists, and their mischief would not burn with the intensity so often and recently demonstrated if ground fuel was not there to stoke them. Foresters of the old school turned to drip torches, bulldozers and prophylactic burns to reduce the risk, but what would they know? When it comes to making communities safe, your modern bushfire academics understand that only taxes and the redistribution of wealth will stop that gum tree burning.

UPDATE: Monash University’s Paul Read has taken umbrage at this item, demanded the right of response, and been promised as much. It will be published when it is delivered.

The Age story can be read via the link below.