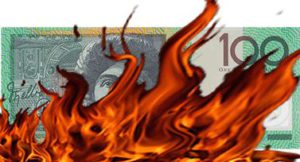 Just in time for the Paris climate fest comes news that delegates and observers will no doubt prefer to ignore, grim reality being decidedly unwelcome at a gathering premised on the notion that wind and sun are economically viable forms of energy for sustaining modern societies and their economies:  Spanish subsidy sponge Abengoa, up until now customarily described as an “alternate energy giant”, is poised to file for bankruptcy. Climate blog Not a Lot of People Know That reports:

Abengoa on Thursday applied for preliminary protection from creditors and called in lenders to start negotiating the terms of an agreement that would prevent a definitive suspension of payments.

In accordance with Spanish insolvency laws, the company has four months to reach an out-of-court agreement with its creditors….

…Meanwhile, shares in the renewable energy and engineering giant continued to plunge, registering losses of up to 25 percent on Thursday – its last day of trading after the Ibex 35’s technical committee decided to take Abengoa out of the blue-chip index.

“Many bondholders are now selling,” confirmed Stuart Stanley, of Invesco Asset Management. “If nobody is willing to intensify their positions, then who’s going to help Abengoa? Right now, the company needs a white knight.”

More correctly, Mr Stanley should have said “more” white knights, as Abengoa’s parlous health  has long been hidden and sustained by literally millions of champions, albeit unknowing ones. That would be the taxpayers in Europe, the US and elsewhere whose generosity has produced so many subsidies, matching grants and the like to conceal the truth of green energy’s gross impracticality.

Oh, and Australian taxpayers too.

For starters, there’s the $450,000 its local subsidiary pocketed to develop plans for a 20MW solar plant in Western Australia. While that sum may seem anything but small change to those whose earnings have been clipped to support the modern variant of extracting sunbeams from cucumbers, the WA venture is but a sidelight. Far more lucrative are the benefits to be attained by cementing a close and loving relationship with the CSIRO: Below, the Newcastle Herald enthuses about a local project that turned water into steam with the help of mirrors and, inevitably, massive taxpayer investment:

The $9.7million research program is supported by the Australian Renewable Energy Agency (ARENA)  and is part of a broader collaboration with Abengoa Solar, the largest supplier of solar thermal electricity in the world.

Forbes magazine, available via the link below, collates a full profile of just how much trouble Abengoa — and its fabled technology — is in. Don’t expect to hear mention of those billion-dollar subsidies amid the sunny babble rising above the skyline of Paris.

A Wealth of
Misconceptions