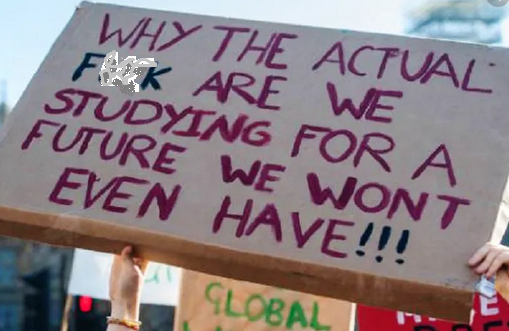 How proud some green teacher must be of this brain-washed adolescent vulgarian.

Once upon a time, afflicting children with the trembling terrors was regarded as abuse. Today, encouraging little ones to believe they have no future, that they are the soon-to-be casualties of a dying planet, is seen as a virtue.

“What kind of monster afflicts children with eco-anxiety by telling them they will be dead in 12 years?” wonders US writer John Nolte.

“I’ll tell you who: the child abusers in the establishment media, the environmental movement, and the Democrat Party — that’s who.”

Nolte is writing of America’s eco hysteria, but give the warmist hysterics a nasal accent and he might just as easily be writing of the no less shameful exploitation of Australian children for political ends:

Even if Climate Change were not a hoax, even if Global Warming were real (it’s not), burdening children with eco-anxiety would still be indefensible.

Sadly, once you realize Climate Change is a hoax wrapped in a left-wing political movement, this deliberate act of terrorizing children with lies, a lie every bit as audacious as saying a meteor will hit the earth in 12 years, is revealed as something truly insidious.

Unfortunately, though, and we see this in our public schools and popular culture, the happiest place in the world for a leftist is that spot between parent and child, and that influential spot is mercilessly abused to destroy the most precious gift of childhood — innocence.

His piece can be read in its entirety here.