Any storm in a port…. 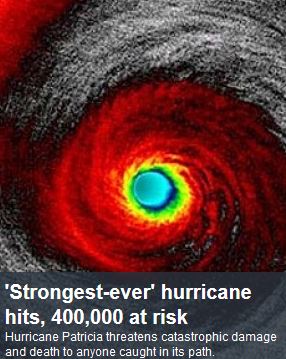 With the Paris climate talks coming up, cynics need not have been gifted with clairvoyance to anticipate that Gaia would be widely reported as once again demonstrating her displeasure with mankind by unleashing the wild fury of extreme weather on some or other part of the globe. As it turns out, poor old Mexico is the nominated whipping boy. Here, from just a few hours ago, Slate’s most excitable warmist, Eric Holthaus, describes the coming cataclysm:

After seeing the incredible data gathered by hurricane hunter aircraft overnight, a few meteorologists have argued that Patricia could be thought of as a Category 7 hurricane—though the official Saffir-Simpson scale only goes up to 5.

Satellite images indicate that Patricia has continued to weaken, and maximum sustained winds are estimated to be near 160 mph (260 km/h) with higher gusts. Patricia is a category 5 hurricane on the Saffir-Simpson Hurricane Wind Scale. Patricia is forecast to rapidly weaken over the mountains of Mexico and dissipate on Saturday.

While 260kph winds are no laughing matter and mudslides even less so, it seems unlikely Hurricane Patricia will match the 1800 fatalities attributed to a 1959 hurricane which came ashore near Porto Vallarta, roughly the same area on which Patricia has had her eye. That first storm did its worst all of 66 years ago and yet, despite the alleged ravages of global warming, the latest big blow is no more severe. Perhaps you need to be an employee of Warmist Inc to discern the crucial differences between now and then.

But not to worry. With Paris mere weeks away and the predicted surge in extreme weather events having failed to materialise (just like those sure-as-eggs hikes in global temperatures we are assured are on the way), any storm in a port to will do to keep the dis-information coming, the gullible anxious and the money flowing.

On the subject of gullibility, the illustration atop this item is drawn from the Age‘s home page. Enough said.