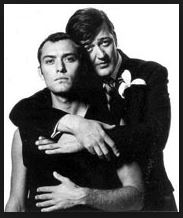 Pity the poor ABC, staggering under the impact of last year’s 5% cut to its budget and now so enfeebled it cannot manage to get Lateline back on air. Gerard Henderson and his ever-helpful Media Watch Dog have a suggestion for ABC tweeter-in-chief Mark Scott, whose salary of $800,000 per year has seen no such reduction:

Perhaps Nice Mr Scott might adopt the ABC’s familiar practice and fill  [Lateline’s empty] space with Stephen Fry from London. It might be called “Waking Up with Mr Fry at 10.30 pm” or “Stephen Fryline” or some such. This should rate well in Newtown in Sydney and Thornbury in Melbourne. Early topics could include an examination of how the Abbott Clerical Fascist dictatorship’s ban on same sex marriage contributes to global warming.