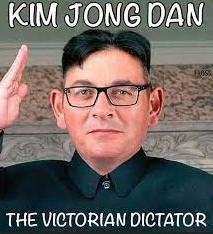 Writing on the website of the American Institute for Economic Research,  Jeffrey A. Tucker laments the lunacy Premier Daniel Andrews is inflicting on the state stupid enough to have made him its Premier, not once but twice.

Melbourne, that glorious city in the state of Victoria in Australia, granted me some of the best travel days of my life during two separate trips, each lasting a full week.

A happy, civilized, highly educated people are here living amidst modern architecture, inspiring bridges, and natural beauty, a place where even the police are kind, and when you ask them for directions they reply with a smile, and when you say thank you, they say “No worries.”

Now there are big worries in Melbourne.

The Premier has imposed a vicious police state without precedent in this country’s history. His name is Dan Andrews (a sweet-sounding name that masks the tyrant he has become), and he tweets out pictures of empty streets to brag about what he has achieved in the name of suppressing a virus.

Tacitus’s line about the Roman empire comes to mind: “Where they make a desert, they call it peace.” ….

Mr Tucker is only warming up. Read on…