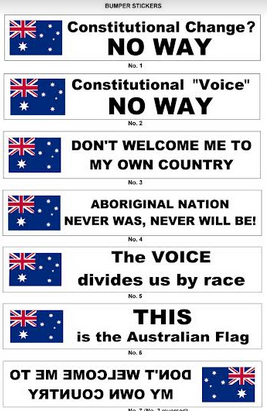 Joanne Hackett’s recent Quadrant piece, Saving Australia, one bumper sticker at a time, has launched something of a movement, with orders pouring in for the updated range of stickers shown above, including the last one for the front bumber. She writes:
“Orders for the bumper stickers continue. To date, 1,600 stickers have been sent to postal addresses across Australia.
Interestingly, WA has the largest demand. Many people are sending queries to the contact email address for the stickers, jbhackett@bigpond.com. The majority of comments tend to be heartfelt thanks for providing an avenue for people to object to the woke wave of manipulative Aboriginal activism. Others are almost tearful apologies for being too scared to make a stand for fear of retribution and accusations of racism.
We have come to a sad and worrying place when Australians are cowered into silence by the activism of a vocal mob. As for racism, most Australians, like me, believe all Australians should be treated equally, without fear or favour. The real racists are those who want to include in our Constitution that one race of people, the Aborigine, be given privileges not given to any other Australian. That is racist.”